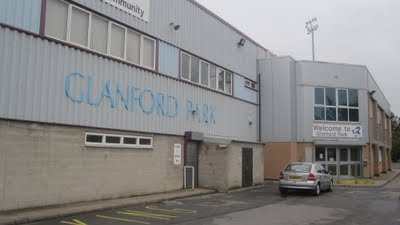 Scunthorpe United supporters are seeking to use Lib Dem support for safe standing areas at football grounds to maintain terracing at their ground. The outcome could have implications for supporters at all major footballing venues.
Nicknamed ‘The Irons’ Scunthorpe United have, with gates averaging little more than 6,000, certainly shown plenty of metal by maintaining their position in English footballs second league, the NPower Championship, for the last three seasons.
One more season of success though and the club will be hit with a massive bill for a move that the majority of their supporters don’t want, whereby seats will be installed at the Doncaster Road End of the 9,088 capacity Glanford Park opened in 1988. This was recently packed for an incident free record crowd of 9,077 for the League Cup match with Manchester United. 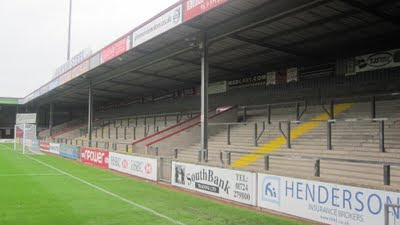 The change will result in a thousand less allowed inside for bigger matches and more expensive tickets, and arises under rules instructing clubs to install seating within three years of being promoted to the Championship. Being unsuccessful on the pitch would though have its rewards, as relegation would enable Scunthorpe to retain its standing area.
Now, with no self-respecting Irons fan shouting for them to go down some of its most vocal have got together to launch a ‘Keep Scunthorpe Standing’ campaign which at the recent derby match with Leeds United obtained the backing of the club’s most famous supporter, ‘Beefy’, or Ian Botham. He added his signature to those of more than 2,000 regulars and with backing from the Football Supporters’ Federation [FSF], which represents over a quarter of a million fans through various supporters organisations, they’re trying to get the Liberal Democrats to pressurise their coalition partner, the Tories, into backing the junior parties official position of supporting safe standing.
Bath’s Don Foster has been the MP taking up the case with Hugh Robertson, the Sports Minister, and said “he is probably sick of me by now. He’s agreed this is an important issue worth looking at again and will be speaking to the FA, the Premier League, the Football League and the Football Licensing Authority to discuss the potential for change. The 2012 Olympics is the priority but until recently it was followed closely by the 2018 World Cup bid. Now that the latter is over I think it will be time to take another look at safe standing.”
As a long standing Scunthorpe fan David Beverley would like to think that Foster is right, but meanwhile he’s gathering further support including that of local Conservative MP Andrew Percy, whose constituency includes Glanford Park. Now that they are out of office Labour too is behind the campaign, with its new leader Ed Miliband saying he will meet the campaign.
Beverley is keen to point out that Morecambe have just built a brand new ground, the Globe Arena, whose 4,000 plus standing areas dwarf the remaining terracing at Scunthorpe. He’s also noted, as anyone who watches Match of the Day can’t have failed to notice, that every weekend fans of away teams in the Premier League are unlikely to watch their favourites sitting down.
But surely standing, especially after Hillsborough in 1989 when 96 supporters lost their lives on the antiquated Leppings Lane, isn’t to be trusted? Not so argues FSF representative Chris Nash who said, “plenty of large football grounds in Europe have massive standing areas that are safe. Similar facilities could be made available here for the many fans who’d prefer to stand and who were are campaigning on behalf of to try and change the ground regulations.”
Don Foster is hopeful saying “while we are not home and dry just yet, I feel that progress is being made." However if that really is the case Hugh Robertson, and the department of Culture, Media and Sport [DCMS] he represents, certainly aren’t giving anything away because after the Sports Minister’s office forwarded my questions to the DCMS a spokesperson said “whilst we appreciate some supporters have genuine concerns about Glanford Park becoming all-seater we are not convinced that a compelling case has been made to change the legislation which has helped ensure improvements in safety at football grounds over the last 20 years.  There are no plans to change policy and Scunthorpe will be required to covert to an all-seater stadium by next season.”
Despite the negative reply Beverley, perhaps not surprisingly, responded that all those involved “are determined to stand our ground.”
Posted by Mark at 09:03