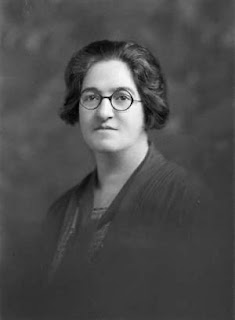 A blue plaque was unveiled at 18 Foyle Street, Sunderland in September 2019 to Dr Marion Phillips, Sunderland’s first female MP, who was also the first female Jewish MP ever. Foyle Street was chosen as its was the site of the former offices of the Labour Party whilst Marion was MP between 1929 and 1931.

The plaque was mounted largely at the instigation and campaigning of Dr Sarah Hellawell.  This was great work by the lecturer in modern British history at the University of Sunderland.

Phillips was born in Australia in 1881 and moved to Britain in 1904. She began working on the Royal Commission into the Poor Laws, researching public health, medical relief and the treatment of destitute children.

In 1912 she was elected as a Labour councillor in the London borough of Kensington, where she pressed for public baby clinics, school meals, better council housing, employment schemes and the prohibition of sweated labour. She also sought better medical inspection and treatment of school children.

Phillips in 1918 became Labour’s first chief woman officer, a role where she spoke regularly throughout Britain and one she retained until her death. On 19 May 1926 miners leader A J Cook asked Marion to organise a committee of Labour women to raise funds to prevent miners and their families from starving. This followed the collapse of the 1926 General Strike and the ongoing miners’ lock-out in a battle over pay and conditions.

The chair of the committee, which was given free premises by the Labour party, was Ellen Wilkinson, the then Labour MP for Middlesbrough. Collection sheets were printed and circulated everywhere. Wilkinson toured the country appealing for support. By the end of May over £2,000 a day was being raised.

When the lock-out ended a special Christmas appeal was made. The fund closed on 8 January 1927 and by which time it has raised £313,874, the equivalent of £19 million today.

More information is at:-

https://redflagwalks.wordpress.com/2019/11/04/a-forgotten-womens-solidarity-campaign-the-womens-committee-for-the-relief-of-the-miners-wives-and-children-may-1926-to-january-1927/
Phillips was pressurised by local people, especially women, to stand in Sunderland in 1929, the first election when women and men’s voting rights were equal. She was one of only 14 MPs in Parliament, but she lost her seat at the 1931 General Election and she died of stomach cancer the following year.
https://spartacus-educational.com/Amarion_phillips.htm
https://www.sunderlandecho.com/retro/who-was-dr-marion-phillips-story-sunderlands-first-female-mp-blue-plaque-honours-her-achievements-637781 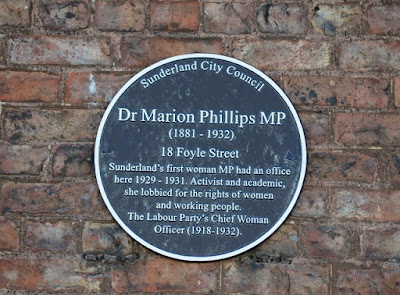 ADVERTISING
Posted by Mark at 07:03