Sheffield pub helps bring people together
Campaign encourages strangers to converse
Big Issue North 2-8 March 2020
A historic Sheffield pub is backing the Campaign for Real Ale in its promotion of the important role played by pubs in tackling loneliness.
The Gardeners Rest, Neepsend on Sheffield’s outskirts is the only pub in a district once well known for its connections to the gas, rail and steel industries. When the owners, after nearly two decades in charge, decided to sell up and retire, regulars decided they would buy the premises, with its cellars, main room, conservatory, garden and upstairs function room.
The pub was known for its friendliness and as a music venue serving good-quality, affordable real ale. The beer remains fine value, with the house ales below £3 a pint. “Many Camra members like me drank regularly here,” said Tim Stillman, a former Sheffield University employee. “Aware of the successful pub regenerations in nearby Kelham Island we approached the Plunkett Foundation to help us keep the Gardeners Rest going by turning it into a community society.”
Creating jobs
Paying between £100 and £5,000, 382 shareholders took over operations of the pub, right next to the River Don, three years ago. The management committee includes members with extensive experience of creating jobs for disadvantaged people. Stillman now works weekday mornings at the pub as a work supervisor with students from Freeman College. Operated by the Ruskin Mill Trust education charity, Freeman, located in Sheffield City Centre, provides residential and day provision for 16-25 year olds with complex learning, mental health and behavioural needs, including autism. Young people are encouraged to gain vocational qualifications and undertake work experience.
Small groups of students from Freeman each work two to three mornings weekly for two to three hours at a time. “They help make and serve sandwiches and locally- sourced pork pies. They
learn to follow instructions and interact with customers. The reviews have been good. Thanks in part to his time here one student now works in a cafe,” said Stillman.

Bar manager Shaun Price had 25 years experience in the pub trade before taking up his current post six months ago. “I was attracted partly by the opportunity to work alongside the young people with autism. I feel I am putting something back into the community as well as maintaining the high standards of the beer,” he said.
The pub won the 2019 Camra Sheffield Pub of the Year award. It has three regular ales and eight guest beers that change weekly, many from local micro and independent breweries.
According to Mark Willson, a cricket groundsman who chairs the management committee, the pub’s beer garden is one of its main attractions.
“It is just feet from the river,” he said. “On warm days you can sit there for hours with the sun passing slowly overhead. It can be packed. The loud conversations mean it is thankful that we are not near any residential accommodation.”
Some visitors to the Gardeners Rest are not so chatty and so when members heard about Camra’s initiative to reduce loneliness they were keen to get involved. On a table in the conservatory a Chatter and Natter (C&N) sign was visible. This is a national scheme that aims to reduce loneliness and social isolation by getting people talking to each other. Pub customers who are happy to talk to
other customers can sit there. Except on Saturdays the sign is out every day for a number of hours.
Brighten a day
“Some people might go days without talking to anyone and we hope this may help if they feel isolated,” said Janet Ridler, who works as a historical interpreter and whose passion for the pub shines through. “It is done at people’s own pace.
“We have many who come in on their own. We also have two part time staff who live in sheltered accommodation. So anything that can encourage interaction – even a short conversation can brighten up a person’s day – we will back. We do the same at the many music events that are organised.”
Sitting enjoying a drink at the C&N table was Paul Truin. He works for the Workers Educational Association but was previously employed by a mental health project. “Thanks to the rent-free upstairs room here I have been able to organise charity events for prostate cancer,” he said. “Those suffering can struggle to come to terms with it, leading to spells of depression. So getting them in the pub to meet others, including those facing the same concerns, helps.
“This table is a great idea. I am a shareholder and the fact that the pub continues to do well whilst supporting the community shows it’s fulfilling many of the varied needs of local people.”


He raised his glass in salute. 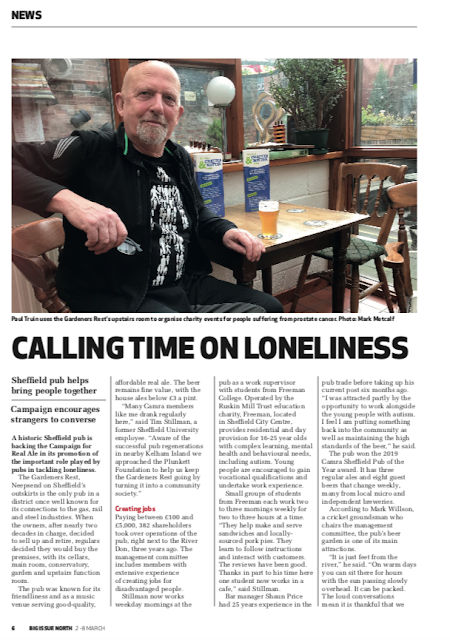