Incinerator inquiry postponed
Big Issue North magazine, 13-19 May 2019
Skip hire firm’s plans face public opposition
A public inquiry into whether Calder Valley Skip Hire will be allowed to incinerate waste at its West Yorkshire site has been adjourned until November. The company appealed to the secretary of state when its planning application was refused by Calderdale Council on
the grounds that polluting emissions would reduce air quality locally and be harmful to health.
Inaccurate expert advice on the chimney flue height — which affects the dispersion of gases released by incineration – led the planning inspector to make an adjournment after four days of evidence recently.
Long-running inquiry
The company claimed the proposal would be small scale, incinerating waste otherwise sent to landfill, but it attracted significant local opposition and there was over 1,000 responses from members of the public opposing the plans.
A maximum of six tons an hour would be burnt – around 15,000 tons annually. This represents a sixth of the amounts incinerated at the smallest municipal waste incinerators (MWI), the safety of which has been the focus of a long-running inquiry into any link with infant mortality by Public Health England (PHE).
MWI burn solid waste to convert it into ash, flue gas and heat to generate electricity. More than
35 per cent of all local authority waste is now being incinerated despite emissions that may pollute the air, water and soil and have harmful impacts on the environment and animal health.
The issue of whether there are any links between infant mortality levels and MWI has been consistently raised in recent years by MPs and campaigners but PHE has not announced that its study, first promised in 2003 and started in 2011, has now concluded. Researchers at Imperial College London examined all 22 MWI, including those in Bolton, Kirklees, Sheffield and Stoke-on-Trent, operating across Britain between 2003 and 2010.
A PHE spokesperson said the study did not prompt any change to its position and that there is “no evidence of a link between modern MWI and infant mortality... these incinerators are not a significant risk to public health”.
Infant mortality
The apparent unwillingness to publicise a study appearing to confirm what PHE has contended for many years has left campaigner Michael Ryan “distinctly unimpressed”. Ryan’s research, reported on by Big Issue North since 2011, was significant in forcing PHE to conduct the study.
He points out that other international studies have produced very different findings, such as in the American Journal of Epidemiology, which looked at births and deaths in Massachusetts in 2001-2007 and found “statistically significant associations between lifetime exposure and infant mortality”.
Ryan began his own studies after two of his children died, one at 14 weeks, and considered their deaths could have been related to living downwind of an incinerator. He challenged the accepted wisdom that high infant mortality levels can be solely attributed to deprivation and cultural problems.
When he mapped infant mortality levels for all 625 London wards between 2002 and 2011 he discovered that the wealthy Chingford Green area of North London, located close to the Edmonton waste incinerator, had a rate of 10.3 infant deaths per live births in the nine years. The national average was 4.56.
Nationwide analysis produced similar results. In Bolton, which burns 90 tons annually, five of the top six wards with the highest infant mortality levels border the Great Lever incinerator.
“The public is concerned about MWI emissions. Cross- party MPs have raised the issue in Parliament. Why the silence?” said Ryan. “The subject is still alive as the study is flawed.”


Big Issue North put Ryan’s points to PHE and to those who conducted the study but did not receive a response. 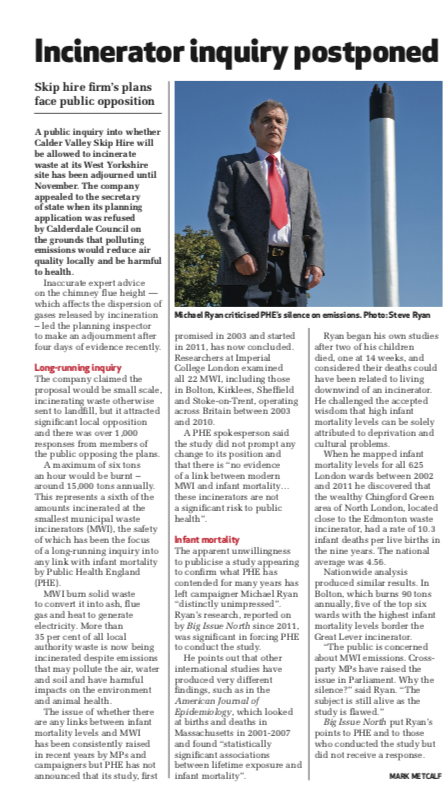