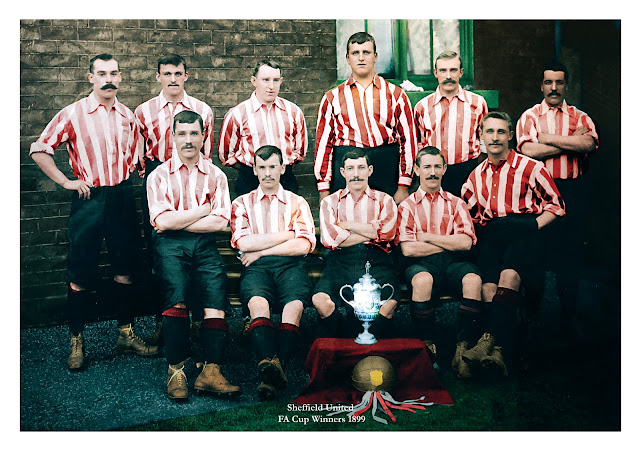 
The end of the Victorian era was when Sheffield United, formed in 1889, enjoyed its most successful period with the Bramall Lane club winning the First Division title for the only time in 1897-98,  twice winning the FA Cup in 1899 and 1902 and also reaching the FA Cup final in 1901. Some great players appeared for the South Yorkshire side at the time including legendary ‘keeper Billy Foulke and half back and captain Ernest Needham, one of the all-time greats of English football and arguably the finest ever player to represent Sheffield United.

Having become the first side from Yorkshire to capture the Division One championship in 1897-98, Sheffield United fans were desperate to see their side emulate the feat of local rivals Sheffield Wednesday, who in 1896 had won the FA Cup.

Sheffield United beat Burnley 2-1 after a replay in round one of the 1898-99 FA Cup before also beating PNE 2-1 after a replay in round two. 9,000 travelling fans were then present to witness an 86th minute goal by Fred Priest that helped record a 1-0 victory at cup holders Nottingham Forest, who earlier in the match were prevented from taking the lead by a superb save by Foulke.

Victory set up a semi final clash with Liverpool and this proved to be a titanic struggle. A 2-2 draw was followed by a 4-4 in a game played at Burnden Park, Bolton. With just six minutes of the game remaining, Liverpool led 4-2 but two quick goals by Priest saw the tie move to a third game.

This was played at Fallowfield, Manchester and where the ground was inadequate for the numbers that attended. Following frequent crowd encroachments and with the light fading the match was abandoned at half time with Liverpool leading 1-0.

The tie thus moved to the Baseball Ground, Derby where Liverpool tried to kick their opponents off the field before a single Priest goal two minutes from the end set up a first FA Cup final for Sheffield United. Their opponents were Derby County, the losing finalists the previous year, and the match was played at the Crystal Palace.

A record crowd of 73,833 assembled to watch the action and at the interval it was Derby fans who were the happier as the Rams led 1-0 courtesy of a goal by John Boag. The second half was to prove a very different affair but only after Steve Bloomer missed two opportunities to extend Derby’s lead.

Then three quick goals between 60 and 69 minutes were netted by Sheffield United with Walter Bennett heading the first before Billy Beer put his side ahead on 65 minutes and then Jack Almond scored four minutes later. A demoralised Derby side rarely threatened to reduce the two goal arrears and with just a minute remaining Priest completed the scoring to make the final score Sheffield United 4 Derby County 1.

The FA Cup had been won by Sheffield United for the first time in the club’s history by the following side: Foulke, Thickett, Boyle, Johnson, Morren, Needham, Bennett, Beer, Hedley, Almond, Priest

Three seasons later, Sheffield United defeated Southampton 2-1 after a replay in the 1902 FA Cup final with goals from Billy Barnes and George Hedley. The winning side included six that had played in 1899 in Foulke, Thickett, Boyle, Johnson, Needham, Hedley and Priest.