Big Issue North December 2017
Spotlight on waste incinerator emissions
Campaigner cautiously welcomes new findings
A new American study on the impact of tiny air particles on infants contends that the results “provide supportive evidence that lifetime exposure increases the risk of mortality”.
The findings have been cautiously welcomed by Michael Ryan, whose research, reported by Big Issue North, was significant in forcing Public Health England (PHE) to conduct a study on the impact of municipal waste incinerators (MWI) on infant mortality levels.
Ryan is currently waiting for the release of the results of the now long delayed PHE study and another by the Lullaby Trust, which aims to prevent unexpected infant deaths.
He has also just submitted a detailed series of maps, information and reports, some stretching back to the mid-19th century, from across the world, to the Environment, Food and Rural Affairs Select Committee inquiry into air quality currently taking place in Parliament.
Microscopic pollution
The new American study. published in the American Journal of Epidemiology, looked at births and deaths in Massachusetts in 2001- 2007. It mapped them against estimates of the amount of PM2.5 particles they would have been exposed to.
PM2.5 particles are pollutant microscopic particles found in the atmosphere – either solid or liquid – such as dust and ash. Waste incinerators emit them, although in the US study the source of them was not specified. “We found statistically significant associations between lifetime PM2.5 exposure and infant mortality,” report the researchers.
A personal mission
In 2004 a major Japanese study concluded that incinerators pose a health risk to infants. The previous year the Health Protection Agency – now PHE – promised to check health data about incinerators and landfill sites because of residents’ concerns. Ryan subsequently made a Freedom of Information request and found that no checks had been undertaken.
After losing two of his children, one at 14 weeks, and considering their deaths could be related to living downwind of an incinerator, Ryan undertook his own studies in the UK, finding that infant mortality rates were higher close to incinerators, whether that was in affluent or poorer areas.
He has since campaigned for further studies but one by PHE, into the link between incinerator emissions and infant deaths, has been delayed. PHE expected to report preliminary results in March 2014 and in July 2015 said it was aiming to submit results to peer-reviewed journals at the end of 2015. It is now expecting to do that by the end of this year.
PHE has contended that well regulated modern incinerators are not a significant risk to public health.
There have been delays too in another study, funded by the Lullaby Trust, on ambient air pollution in Sudden Infant Death Syndrome (SIDS) mortality. The Lullaby Trust’s initial findings in 2015 indicated “ambient air pollutants were associated with increased SIDS mortality”.
“The Massachusetts results provide further supplementary evidence that claims by the PHE – which has once again delayed releasing its own report – that municipal waste incinerators are safe should be treated with scepticism especially where infant mortality is concerned,” said Ryan.
“This is one of the points I have made, after being approached by the committee to submit my opinions, in my detailed written submission to the Environment, Food and Rural Affairs Select Committee inquiry. I am finding that an increasing number of groups that are opposed to waste incinerators being built locally are approaching me for information.”
PHE refused to comment on the study. A Lullaby Trust spokesperson said: “We are very interested in the findings, they point towards lifetime exposure to PM2.5 increasing the risk of infant mortality, including SIDS.”
MARK METCALF 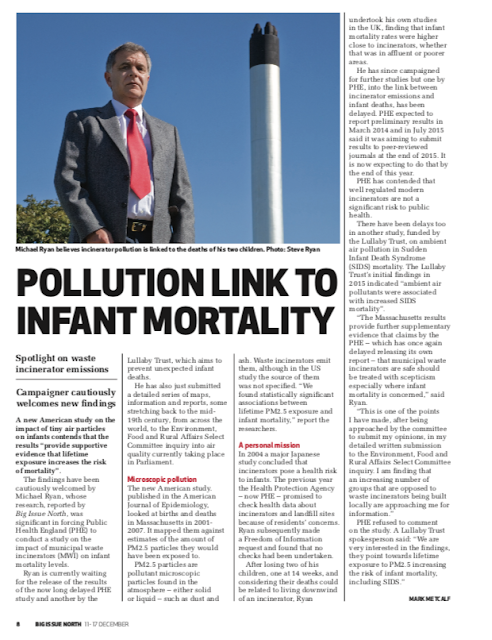