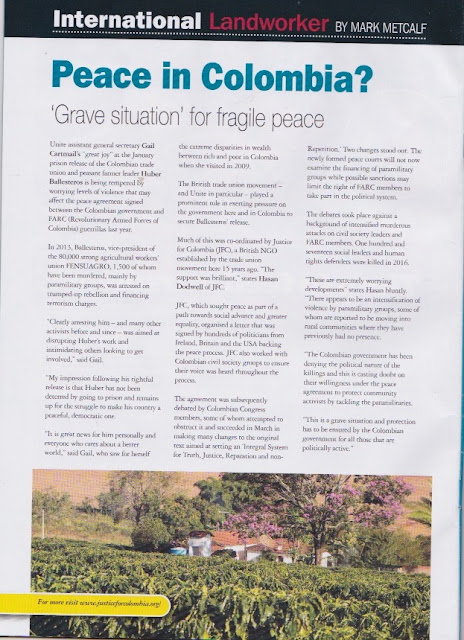 Unite assistant general secretary Gail Cartmail’s “great joy” at the January prison release of the Colombian trade union and peasant farmer leader Huber Ballesteros is being tempered by worrying levels of violence that may affect the Peace Agreement signed between the Colombian Government and the FARC (Revolutionary Armed Forces of Colombia) guerrillas last year.

In 2013, Ballesteros, vice-president of  the 80,000 strong agricultural workers’ union FENSUAGRO, 1,500 of whom have been murdered, mainly by paramilitary groups, was arrested on trumped-up rebellion and financing terrorism charges.

This was in a period when FENSUAGRO lead a mass strike that mobilised over a million people on street protests against the devastating impact of free-trade agreements, privatisation and inequality-driven poverty. Huber was just about to travel to speak at the 2013 TUC Conference.

“Clearly arresting him — and many other activists before and since — was aimed at disrupting Huber’s work and intimidating others looking to get involved.

“My impression following his rightful release is that Huber has not been deterred by going to prison and remains up for the struggle to make his country a peaceful, democratic one.

“It is great news for him personally and everyone who cares about a better world,” said Gail, who saw for herself the extreme disparities in wealth between rich and poor in Colombia when she visited in 2009.

The British trade union movement — and Unite in particular — played a prominent role in exerting pressure on the government here and in Colombia to secure Ballesteros’ release.

Much of this was co-ordinated by Justice for Colombia (JFC), a British NGO established by the trade union movement here 15 years ago. “The support was brilliant,” states Hasan Dodwell of JFC.

JFC, which sought peace as part of a path towards social advance and greater equality, organised a letter that was signed by hundreds of politicians from Ireland, Britain and the USA backing the peace process. JFC also worked with Colombian civil society groups to ensure their voice was heard throughout the process.

The Peace Agreement between the Juan Manuel Santos government and the FARC guerrillas was concluded in Cuba in August last year. It followed two years of preliminary negotiations and a further four years of talks in Havana.   Throughout the process, JFC organised delegations to Cuba from Northern Ireland that included unionist and nationalist participants from the 1998 Good Friday Peace Agreement. A delegation met Santos and they were the first international group to meet the FARC negotiating team. In Washington they outlined to senior politicians their impressions on the situation in Colombia.

The agreement as opposed by many, including opposition leader Alvaro Uribe, the one time president for eight years, and it represented a necessary compromise that ended a deadly conflict that stretched back to the 1960s and in which 200,000 people were left dead.

“There is no doubt that an essential role was played by JFC in getting both sides to make an agreement. Taking their lead from Colombian civil society organisations such as trade unions they were pushing for peace even when that was being portrayed as supporting terrorism,” states Gail Cartmail.

The agreement was subsequently debated by Colombian Congress members, some of whom attempted to obstruct it and succeeded in March in making many changes to the original text aimed at setting an ‘Integral System for Truth, Justice, Reparation and non-Repetition.’ Two changes stood out. The newly formed peace courts will not now examine the financing of paramilitary groups whilst possible sanctions may limit the right of FARC members to take part in the political system.

The debates took place against a background of intensified murderous attacks on civil society leaders and FARC members. One hundred and seventeen social leaders and human rights defenders were killed in 2016.

“These are extremely worrying developments” states Hasan bluntly. “There appears to be an intensification of violence by paramilitary groups, some of whom are reported to be moving into rural communities where they have previously had no presence.

“The Colombian government has been denying the political nature of the killings and this is casting doubt on their willingness under the Peace Agreement to protect community activists by tackling the paramilitaries.

“This is a grave situation and protection has to be ensured by the Colombian government for all those that are politically active.”

www.justiceforcolombia.org/
Posted by Mark at 02:32