CLOSED OR FRANCHISED OUT: the future looks bleak for the rural post office

This article was written in April, but because of the General Election there was a delay on the publication of Landworker magazine, which has just been released this week.

The future of six main Post Offices in rural areas has been cast into doubt after they were named in January on a list of 37 branches to be closed and franchised. All six in Petersfield, Diss, Redruth, Lancing, Camborne and Ulverston play a major role in their local communities. 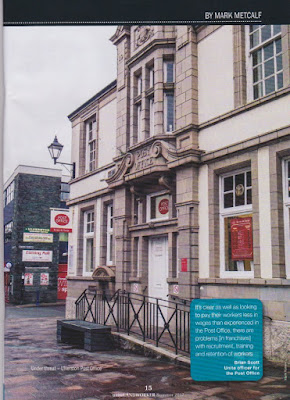 Unite represents the interests of 730 managers  in the Post Office. Along with their colleagues in the Communication Workers Union (CWU) they took part in a series of strikes late last year in protest at job losses, the closure of a final salary pension scheme and franchising, under which ‘partners’ within retail outlets such as WH Smith are found.

The action was taken at the same time as the Tory government, the ultimate owners of the Post Office, undertook a consultation on the future of the Post Office network and for which Unite - and many others - submitted a considered response.

Unite expressed concerns about the failure of the Post Office ‘to deliver a clearly articulated sustainable business plan’ in which ‘the ongoing provision of quality, secure, well paid jobs, via an efficient, sustainable and sought after Post office Network, is an important component of the UK postal industry.’

Additionally, ‘quality of services or access to all Post Office products was not being taken into account’ such that ‘the general public are not always aware of services available’ such as banking and cash withdrawal. The impact of separating the Royal Mail in April 2012 from the Post Office has made the latter “an unsustainable business in its own right” and has resulted in a  25 per cent drop in annual income from the government from £164 million to £128 million in 2016.

Yet the ink was hardly dry when the news of further franchising was announced. No timetable to find partners has been established. The Ulverston branch in Cumbria has seven employees, including one member of Unite.

The local Barrow and Furness Labour MP John Woodcock has denounced the proposals and told Landworker, “The post office in Ulverston has stood for hundreds of years and if the local community were deprived of this vital asset it would be a disaster for the town.

“I have sought guarantees from management that the service would not be lost, and it is worrying that those assurances have not been forthcoming.

“There is clearly a strong feeling in the town that people want to post office to stay, and I will continue to campaign alongside Unite and the CWU to defend services and jobs in the weeks ahead.”

A petition drawn up by Woodcock had attracted over 5,000 by mid-March.

Brian Scott is the Unite officer for the Post Office. "We will fight to preserve decently paid jobs and an effective, quality Post Office network. But the negative changes going on across the Post Office, along with the Government reluctance to fund Post Office services means the picture looks less than rosy, especially as state funding is set to end next year.

"There is evidence that the quality of services and reliability in offices that have been franchised is less than that from the original Crown Office. Why? It is clear that as well as looking to pay their workers less in wages than experienced in the Post Office, there are problems with recruitment, training and retention of workers.

"In small franchised sub Post Offices there are now longer hours than before but the owners are experiencing no increase in postal related trade. For the Post Office Network to move forward it requires a clear strategy to be developed in which franchising is re-examined,” concludes Brian. 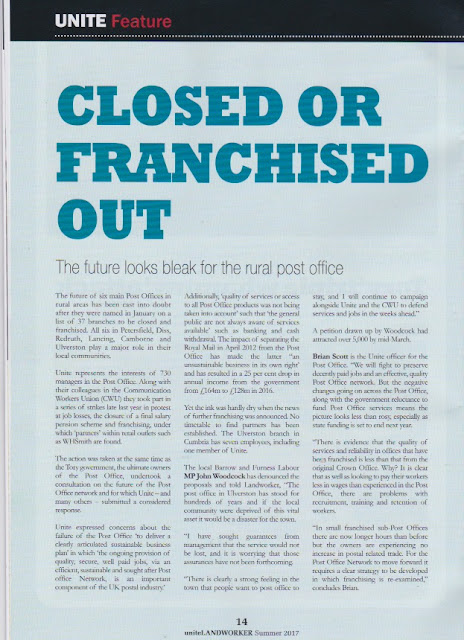