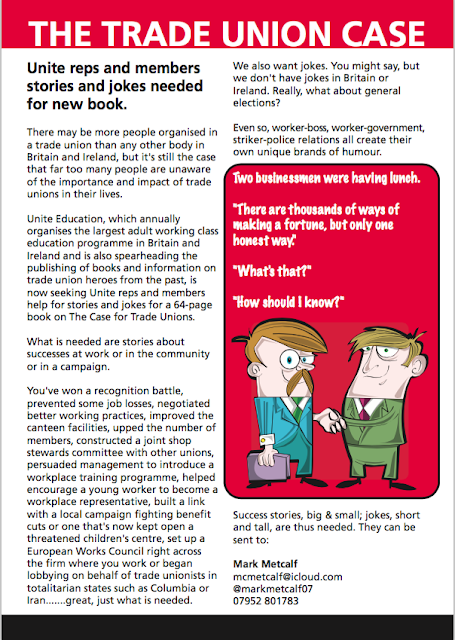 A jazzy leaflet will be out on this next week.

There may be more people organised in a trade union than any other body in Britain and Ireland, but it's still the case that far too many people are unaware of the importance and impact of trade unions in their lives.

Unite Education, which annually organises the largest adult working class education programme in Britain and Ireland and is also spearheading the publishing of books and information on trade union heroes from the past, is now seeking Unite reps and members help for stories and jokes for a 64-page book on The Case for Trade Unions.

What is needed are stories about successes at work or in the community or in a campaign.

You've won a recognition battle, prevented some job losses, negotiated better working practices, improved the canteen facilities, upped the number of members, constructed a joint shop stewards committee with other unions, persuaded management to introduce a workplace training programme, helped encourage a young worker to become a workplace representative, built a link with a local campaign fighting benefit cuts or one that's now kept open a threatened children's centre, set up a European Works Council right across the firm where you work or began lobbying on behalf of trade unionists in totalitarian states such as Columbia or Iran.......great, just what is needed.

We also want jokes. You might say, but we don't have jokes in Britain or Ireland. Really, what about general elections?

Two businessmen were having lunch.

"There are thousands of ways of making a fortune, but only one honest way."

"How should I know?"

Success stories, big & small; jokes, short and tall, are thus needed. They can be sent to:-
Mark Metcalf