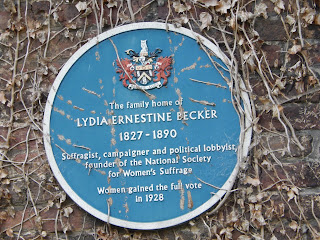 The Lydia Becker blue plaque was unveiled at her family home of Foxdenton Hall, Foxdenton Park on 28 September 1999. She was born in 1827 and was the eldest of 15 children. After hearing Barbara Bodichon lecture on women's suffrage at a meeting in Manchester in 1866 she became converted to the idea that women should have the vote and spent the rest of her life campaigning on the issue.

Becker supported Radical MP John Stuart Mill when added an amendment to the 1867 Reform Act that would have given women the same voting rights as men. The amendment was lost. In 1870, Becker established the Women's Suffrage Journal and when the 1870 Education Act allowed women to vote and serve on School Boards, Becker was elected to the Manchester School Board and took a keen interest in raising the educational standards of girls in the city.

Between 1881 and 1884 Becker was the paid secretary of the Central Society for Women's Suffrage and was elected in 1887 as president of the National Union of Women's Suffrage. She died on 21 July 1890.

Many thanks to Alan Bedford, a Unite safety rep at BAE Systems at Middleton, Manchester for ensuring Lydia Becker features on Rebel Road. "As a local Oldham lad I am proud of my town's radical traditions and want to see them replicated today. I am delighted to know Unite has the Rebel Road project," said Alan.