HOW CORRUPT IS BRITAIN? Book review

A slightly revised version of this will be the September book of the month for Unite Education.

HOW CORRUPT IS BRITAIN?

Edited by David Whyte, Professor of Socio-Legal Studies at the University of Liverpool.

Bribery may not routinely happen in British police forces, public services or in government. But, as 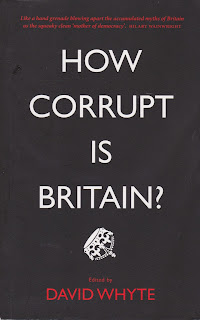 a wide range of campaigners demonstrate in this book there is endemic institutional corruption and that Parliament, regulatory bodies and the police are so implicated in this that they cannot hold others to account.

So successful has been the neoliberal project, which was started by Pinochet in Chile in the 70s and advanced by Thatcher and Reagan in the 80s, in establishing corporate control, even in liberal democracies, that when the banks collapsed because of their own dodgy, frequently illegal, practices in 2008 and Chancellor Alistair Darling stepped in with £500 billion of public funding he didn’t even reference Parliament. Instead he negotiated with a hand-picked group of elite bankers whilst eating a Balti takeaway.

Five years later David Cameron flew 131 business leaders to China on a government trade mission. The delegation included companies involved in bribery allegations connected to Chinese officials plus a broker fined for participating in the LIBOR rate-fixing scandal. Cameron defended the participating firms because he knew that if he vetted them for their unethical practices then the trade delegation would have be much smaller.

With its overseas territories and crown dependancies, Britain's role as the world's number 1 purveyor of financial secrecy ensures the City of London controls 25 per cent of the global market for offshore financial services. This helps conceal tax evasion and avoidance, estimated at £120 billion in 2012/13. David Cameron is himself the product of an offshore dynasty as his father chaired a  Jersey investment firm and co-founded a Panama registered investment company.

In the U.S, the big four, who, of course, gave the UK banks a clean bill of health when they audited them before the crash, have all been fined for corrupt practices. There has been no effective retribution here though. What may have helped the four was donating £3.5 million to the Tories before the 2010 General Election plus previous hefty donations to New Labour when it was in government.

There is also the ‘revolving door’, now common right across the state and corporate sector, whereby senior figures move from the private to public, and vice-versa, sectors. Former PwC staffer Mark Hoban thus became treasury minister responsible for oversight of tax laws between 2010-12. PwC partner Richard Abadie has been head of private finance policy at the Treasury.

The authors in this book, which includes essays on state torture, Hillsborough - including one from Sheila Coleman - and child sex abuse scandals, understand that many people realise how serious corruption is in Britain. What concerns the writers is that the public will regard corruption as unstoppable and something they can do nothing about. That each crime reported will lead to apathy, alienation and atomisation. It is up to all of us to ensure that is not the case.
Posted by Mark at 03:03