It was a real privilege and honour to be asked to speak about football prior to World War I at last Thursday's (June 4) Patrick O'Connell commemorative event in the Mansion House, Dublin. Everyone present had a really great time and the Mayor of Dublin, Christy Burke, and Dublin Central TD, Maureen O'Sullivan made everyone very welcome.


Guest speakers at the event included GAA and hurling stars. Former Spurs and Barcelona forward, Steve Archibald spoke on behalf of European Champions Barcelona FC. Steve noted that the club may no longer have existed if not for the actions of Patrick O'Connell, who as manager took the team on a  tour of Mexico that in the wake of the Spanish Civil War raised urgently needed funds during a period when Franco was keen to see the Catalonian club go out of existence. Steve presented Patrick's grandson, Mike, with a prized Barca shirt.

Celtic heroes Bertie Auld and John Clark brought along the European Cup won by the club in 1967 and received a marvellous reception.

On my part, I spoke for just over ten minutes and was pleased with the applause I received.

On Friday 5 June, Martin Buchan, representing the Professional Footballers' Association, the Players' Union that Patrick was a member of in its early years, Maureen O'Sullivan and Mike O'Connell unveiled a Dublin City Council plaque on Patrick's former home at 87 Fitzroy Avenue in Drumcondra.

Also present was Sue O'Connell, whose research in the last fifteen years has ensured that Patrick O'Connell is no longer forgotten. In attendance were Fergus Dowd and Alan McLean, who have worked tirelessly to ensure Patrick O'Connell, who played for Belfast Celtic, Sheffield Wednesday, Hull City and Manchester United, as well as his home nation, is properly honoured for his contribution to football. 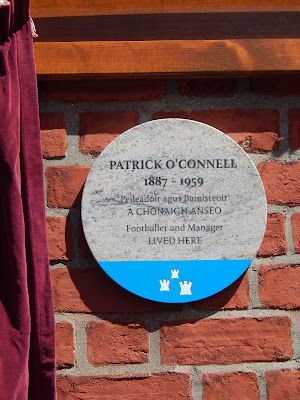