Grave of first ever League goalscorer is located in Bolton cemetery 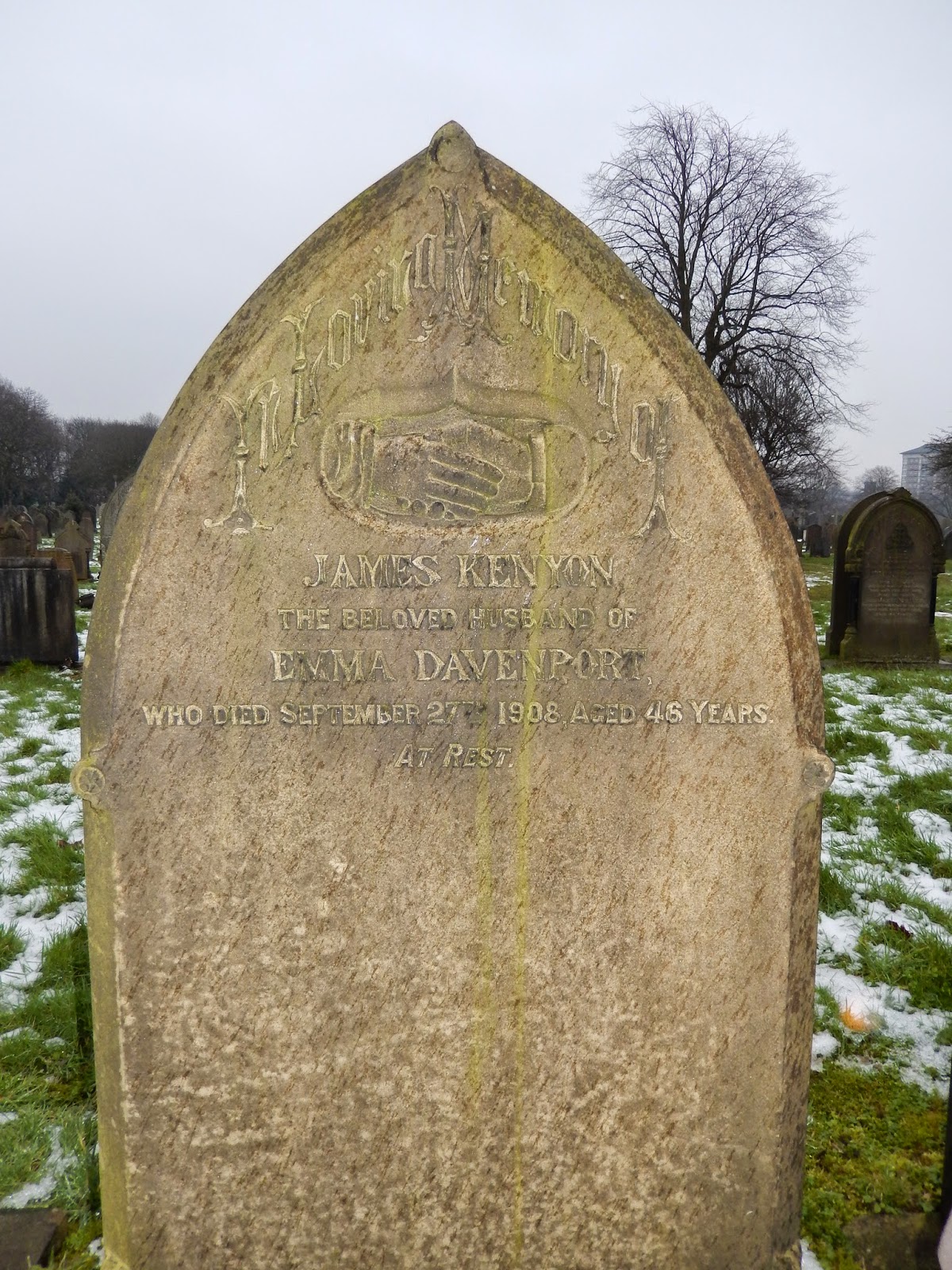 The grave of Bolton Wanderers’ and England international footballer, Kenny Davenport, scorer of the world’s first ever League goal on 8 September 1888, has been located in Heaton Cemetery, Bolton.

On Friday 23 January; Mavis Callaghan - a sprightly 87-years old and who is the granddaughter of Kenny’s brother, James – and author and football historian, Mark Metcalf spent the afternoon on what for much of the time appeared to be a fruitless search. They examined many hundreds of headstones in a section of the Cemetery where according to www.deceasedonline.com the grave resided.

With darkness fast approaching the pair were just minutes away from abandoning the search when Mavis rested her arm on a headstone, Glancing down, Mark screamed, “That’s it. That’s Kenny’s grave. You’ve got your arm on it.”

To some considerable joy, the soaked pair could clearly see the inscription:-

Half an hour earlier, Mavis had remarked that she had never previously visited Kenny’s grave but along with her mum she had once visited her grandmother’s grave in the same cemetery.

“I can recall my mam pointing towards where Kenny’s grave and I am sure it is over here.”

“How old were you at the time?”

76-77 years ago! Mark was a little sceptical but armed with this ‘new information’ it was agreed to continue searching. The problem was that the not all the headstones which remain standing (and a good number are now lying on the ground) still have on them an engraved number and even those that do don’t run in sequence. That was certainly the case with the Davenport headstone.

The information on www.deceasedonline.com also lists 7 names in the burial plot, which is by no means extensive. We expected therefore that the headstone would contain seven names. In the event it had just the one. It is not known if there ever were more names on the headstone or not. Has the weather washed away the names or were no more names added as Kenny was the first of the seven listed to die?

Whatever the answer we do, at least, know the final resting spot for the man who achieved the unique feat of scoring arguably the most significant goal ever when he netted for Bolton Wanderers against Derby County at 3.47 pm on Saturday 8 September 1888, the date of the first League matches in World Football.

Of course, the finding of the grave ‘at the very end’ of an exhaustive search fits with the pattern by which it finally proved possible to confirm that Davenport – and not Wolves Gershom Cox, who put the ball into his own net against Aston Villa on the same day – scored the first goal.

Hundreds of hours were spent by Mark Metcalf and librarian Robert Boyling trawling through every possible newspaper they could find for early September 1888. It was vital to find the kick off time for the Wolves – Villa game. It was only when every possible avenue appeared to have been exhausted that Robert found an advertised kick-off time for the game in the Midland Evening News edition of 7 September. When this confirmed that the game commenced at 3.30pm - and not the previously believed 3.00pm - it became clear that Davenport’s goal on 3.47pm was quicker than Cox’s 30th minute mistake on 4.00pm.

This information subsequently appeared in Metcalf’s book The Origins of the Football League - the first season 1888/89 that was  published by Amberley Publishing in 2013. Coinciding with the 125 anniversary of the start of the Football League, the news that the name of the first League goalscorer could now finally be confirmed drew world wide publicity.

However approaches to Bolton Council, leading councillors, local MPs, Bolton Wanderers, the Football League and the Professional Footballers Association have so far proved totally unproductive. Nothing has happened or appears likely to do so soon.

There will thus be a wreath laying ceremony at 3.47 pm on Tuesday 8 September 2015, exactly 127 years after Kenny Davenport scored for the Wanderers against Derby. It is intended to assemble a list of distinguished speakers at this event. Anyone wanting to assist with this then please make contact with life-long Wanderers fan and secretary of Bolton Trades Union Council, Martin McMulkin on 07918 839327 or Mark Metcalf on 07952 801783.

Anyone who may have information on Kenny Davenport and would like to share it as part of Mark Metcalf’s research into the player then please get in touch on 07952 801783 or at markcmetcalf@btinternet.com