The Orgreave Truth and Justice Campaign (OTJC) is holding a London demonstration at the office of the Independent Police Complaints Commission (IPCC), 90 High Holborn, London WC1V 6BH on Friday 14 November between 12 and 2pm.

The event will mark the two years since the South Yorkshire Police's (SYP) self-referral to the IPCC about allegations of violent policing at the Orgreave coking plant on 18 June 1984.

OTJC members are extremely disappointed at the length of time it has taken for the IPCC to come to a conclusion as to whether they will launch a full investigation into events on that day. We shall be making this clear when we meet, as agreed, with IPCC officials, including chairperson Dame Anne Owers, on November 14. 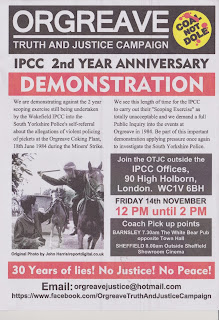 On 18 June 1984, 95 miners were arrested at Orgreave after thousands of police officers – many in riot gear, with others on horseback - brutally assaulted miners participating in a strike aimed at defending jobs and mining communities.

However when the subsequent court cases took place all of the charges – which included, in many cases, riot – were abandoned when it became clear that the oral and written evidence provided by the police was unreliable. Each prosecution had been supported by two police officers making near-identical statements. Later, SYP paid out £425,000 in compensation to 39 pickets in out of court settlements. Nevertheless, no police officers were disciplined for misconduct or charged for the injuries they caused to those they attacked.

It was in November 2012 that SYP referred itself to the IPCC to decide whether there should be a full investigation into what happened at Orgreave on 18 June and in the earlier picketing at the plant in May/June.

The IPCC has thus had two years to conduct an investigation exercise. OTJC remains concerned that the IPCC has undertaken a very limited amount of work in collecting and collating information on events at Orgreave. Much of the information it now possesses has been supplied to it by the NUM, OTJC and solicitor Gareth Pierce. The OTJC therefore remains concerned that no officers will face charges of assault, perjury, perverting the course of justice and misconduct in a public office.

In recent years a number of prominent individuals and organisations have described the IPCC as ‘not fit for purpose.’ The OTJC has not yet drawn the same conclusion but our demonstration will remind the organisation that we will not back away from campaigning for our primary demand, which is a full public inquiry. If the IPCC can help in this then they need to get a move on or if not then move aside as quickly as possible.

The OTJC meanwhile welcomes the decision by the Labour Party to launch its Justice for the Coalfields Campaign and calls on Ed Miliband to confirm that in the event of a Labour Government being elected in 2015 it will order a full public inquiry into events at Orgreave in 1984.

The OTJC protest will start at 12 midday on 14 November outside the IPCC offices, 90 High Holborn, WC1V 6BH.


* Sadly I can't personally make it as I am due to speak about the campaign at a Labour Party social event that evening in Leeds.
Posted by Mark at 05:54