On Sunday 17 August 2014 a 200 strong crowd marched significant distances to descend on St Peter’s Square, Manchester. They were commemorating there the 195th anniversary of the 1819 Peterloo massacre when the cavalry slaughtered at least 15 pro-democracy campaigners.

In 1819 only 2% of people could vote and there was widespread poverty, due mainly to the corns laws that artificially inflated bread prices. On 16 August 1819, contingents from across the Manchester region marched in disciplined fashion to St Peter’s Field to support parliamentary reform and listen to radical speaker Henry Hunt. The crowd was at least 60,000, half the population of the immediate Manchester area. 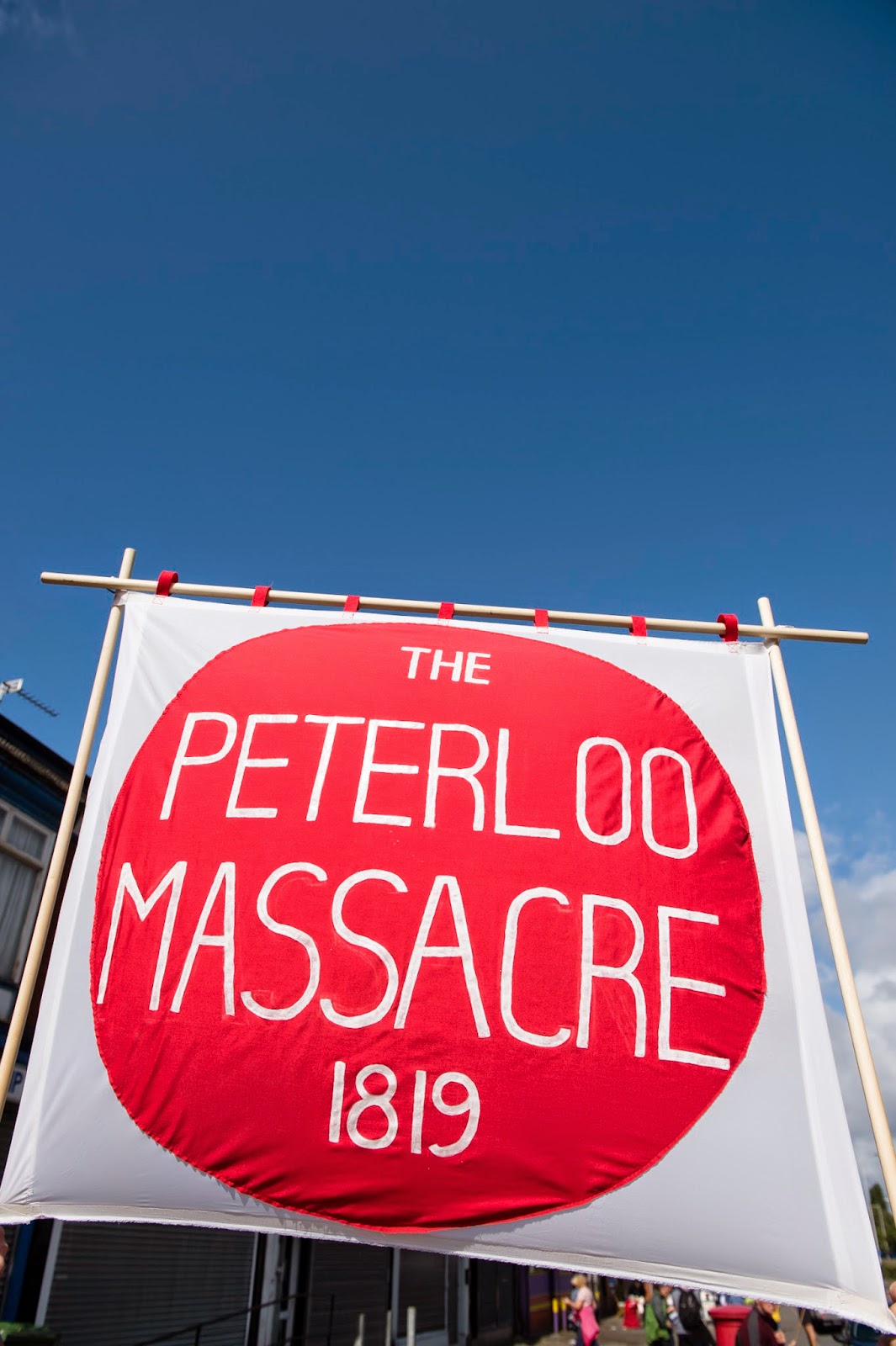 Banners demanded REFORM, UNIVERSAL SUFFRAGE AND EQUAL REPRESENTATION and NO CORN LAWS. Those in a government representing their own needs wanted no such things and sought to arrest Hunt and disperse the crowd.

Wielding sabres, Manchester and Salford Yeomanry galloped into the unarmed, peaceful masses. Two-year-old William Fildes was the first casualty when a late arriving trooper knocked him from his mother’s arms. Fifteen people, at least, were killed and 600 to 800 injured.

Ex-soldier John Lees, who fought at the Battle of Waterloo, died of his injuries on 9 September. He told a friend: “At Waterloo there was man to man but at Peterloo it was downright murder.”

Peterloo became a mocking reference to Waterloo at which soldiers were viewed as genuine heroes. In recent times Peterloo has become compared with the slaughter of pro-democracy demonstrators in Tiananmen Square in Beijing in 1989.

Not content with their killings the authorities in 1819 cracked down on reform with Hunt sentenced to 30 months in gaol. However, liberty could not be suppressed and demands for economic and political justice multiplied. The great Reform Act of 1832 meant Manchester, previously unrepresented in Parliament, elected two MPs. Sweeping democratic changes followed slowly but surely. 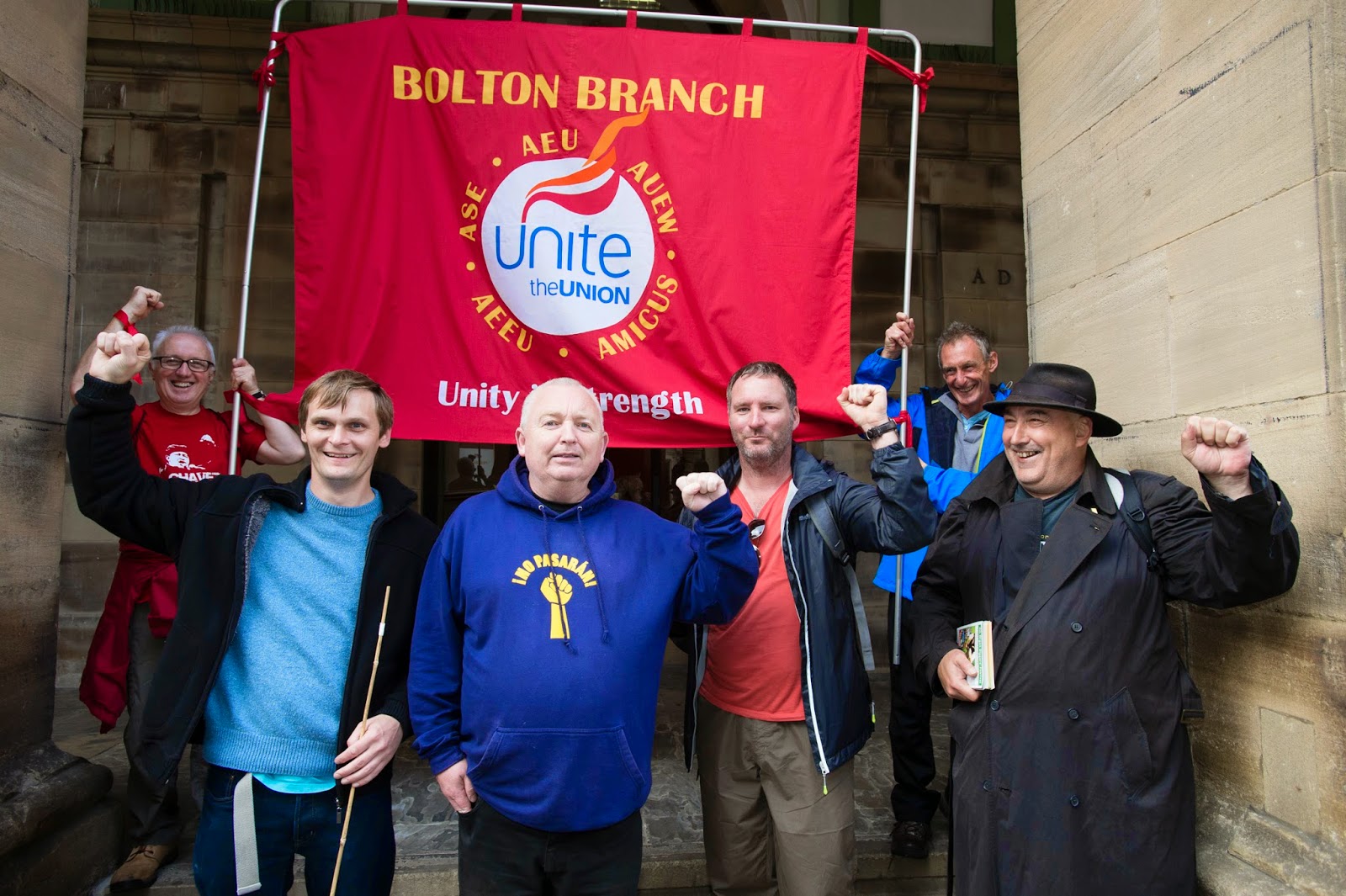 “We followed the footsteps of ordinary working people who marched into Manchester and pushed our system towards democracy. They deserve a monument that is distinctive, respectful and informative”’ said Martin McMulkin, UNITE shop floor convenor at JOST, manufacturers of vehicle connection components.

That prospect has improved now Jeremy Deller is to come up with a design. Manchester’s deputy mayor, Paul Murphy, said after the rally which concluded events “this matters to me and fellow Mancunians, whose forefathers led a struggle for emancipation which needs a fitting memorial. Peterloo should also be taught in schools.”

A view supported by ten-year-old Grace Poyning: “Most my friends like history and Peterloo helped give people some rights.”

Grace was accompanied by her mother, Nichola, and grandmother, Bernie. They heard actress Maxine Peake read out Shelley’s classic poem The Masque of Anarchy (*) which concludes as follows:-

Summing up a good day, PMMC representative Martin Gittins said, “The fact that many people have combined to walk from the surrounding areas of Manchester and thus create this healthy attendance is brilliant. It boosts our plans, which include schools work and encouraging greater public involvement so that we have, at least, 6,000 people in 2019. Meeting Jeremy Deller will be good and hopefully there will be a public consultation about the memorial.”

* Described by the late Paul Foot as “the greatest political poem ever written in English.”