Join the march to save the NHS

Anyone living near the historic 1936 Jarrow March route is being urged to join a protest walk in the next three weeks over the privatisation of the NHS.

The People’s March for the NHS began in Jarrow on Saturday and the core 50 marchers will arrive 300 miles south in Westminster on Saturday 6 September. Rallies and meetings are being held at the 23 stop off points en route. 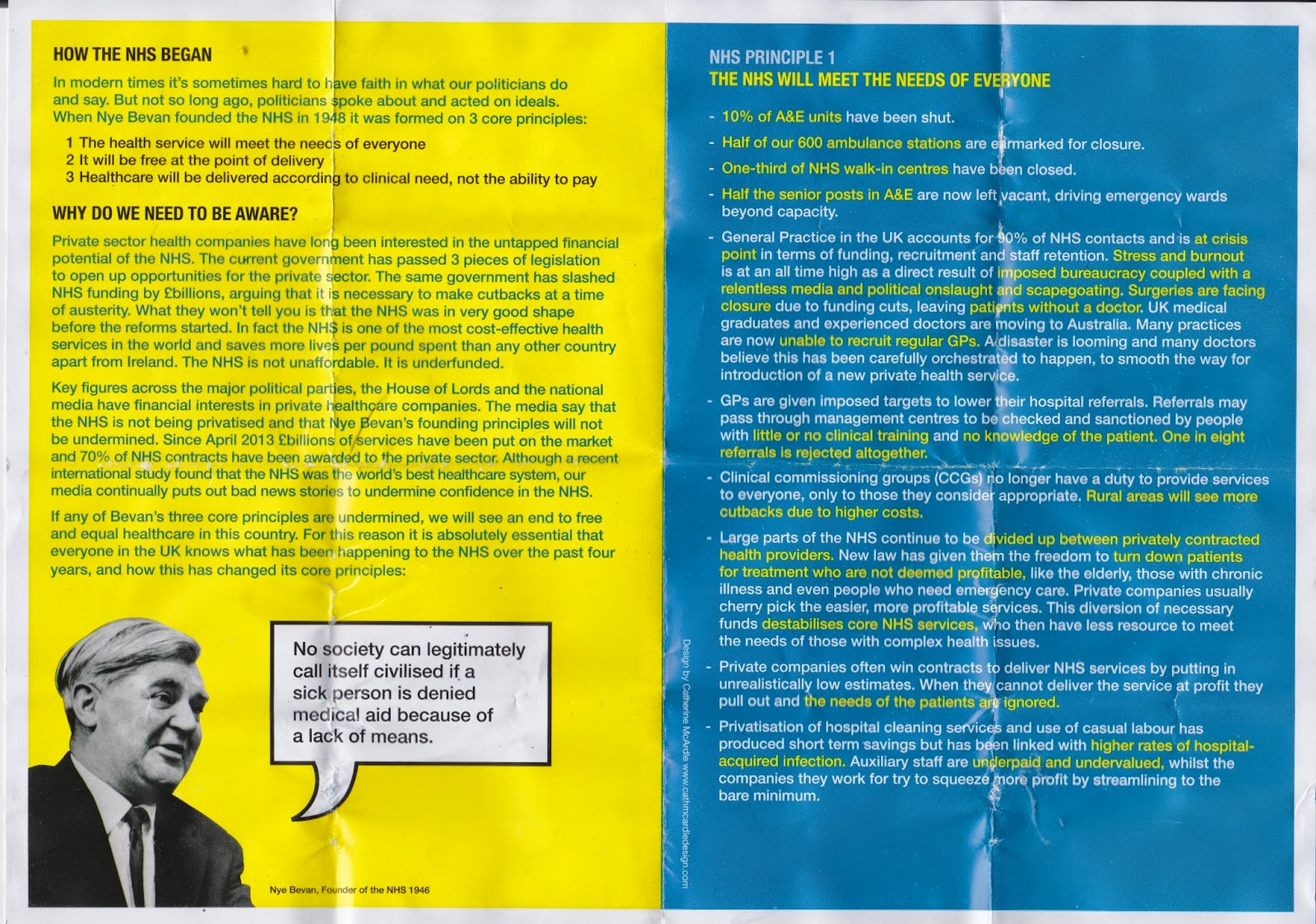 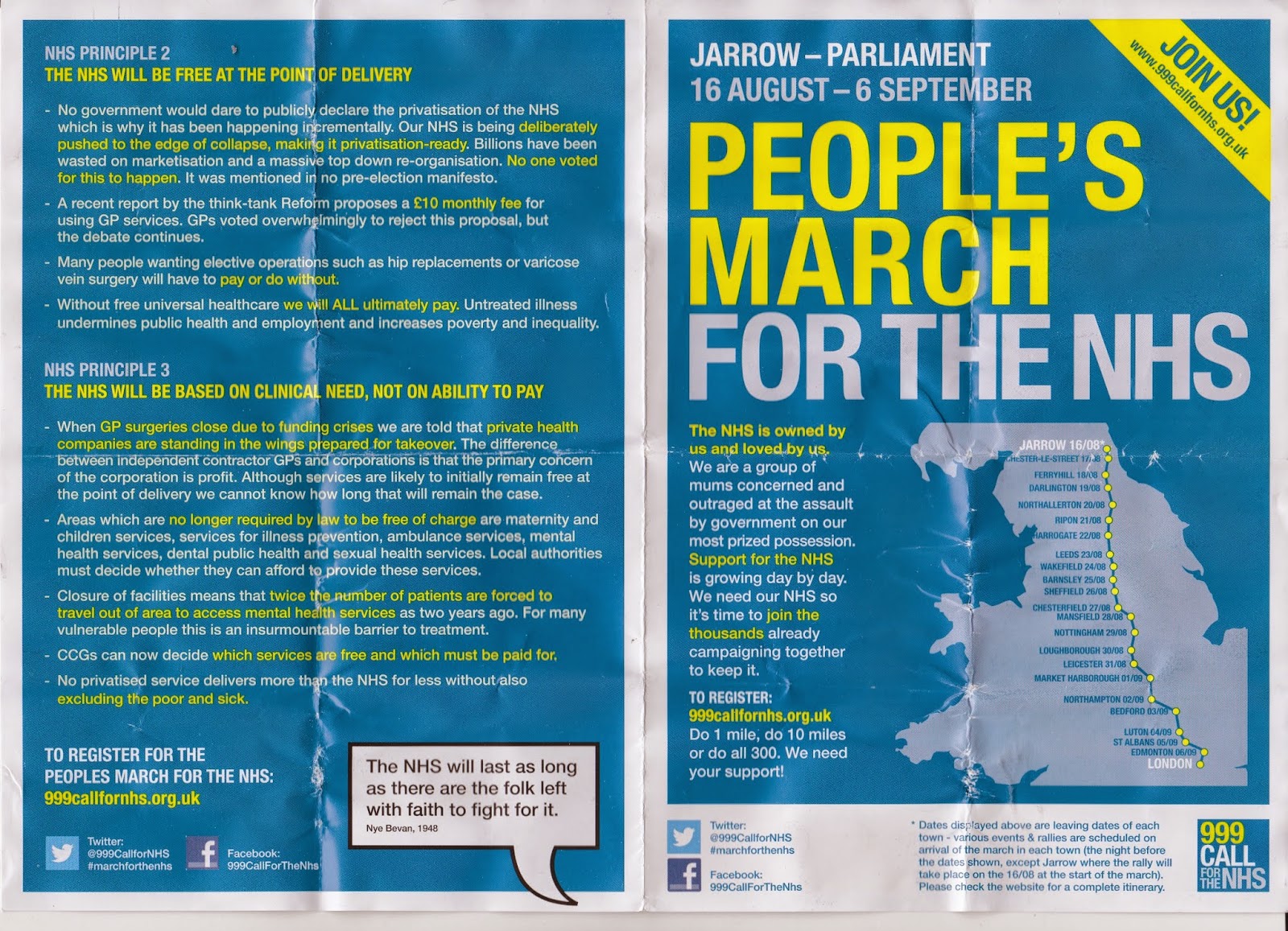 A group of Darlington working mums, known as #darlomums on social networking sites are behind the initiative. They acted following the passing of the 2012 Health and Social Care Act. This removed from the health secretary responsibility for citizens’ health whilst giving him powers to close even well performing local hospitals.

The act also requires commissioners to tender out everything that can be provided by private contractors and following which private firms won 70% of contracts for England’s NHS services between April-December 2013.

This fragmentation, marketisation and privatisation of health care provision is opposed by UNITE the union because it costs more, decreases service quality, creates health inequalities, fragments services and generates a race to the bottom in staff terms and conditions.

Founded by a radical, reforming post-war Labour government the fear is that unless large numbers of people are mobilised in its defence there will be no NHS.

Lorry driver Craig Farlow is determined to prevent this. The UNITE DHL workplace rep has taken three weeks holiday to complete the walk to London and “tell the government we want all health services to be publicly funded, run and accountable. The NHS should look after people from the cradle to the grave and not discriminate against anyone for lack of money.”

Joining Craig for much of the walk is Barbara Campbell, a UNITE member working as an endoscopy nurse at North Tees Hospital, and who is concerned that “even I, a political person working in the NHS, has been recently taken aback at discovering how many services are being privatised. I do not trust the government to maintain the NHS.”

But will Labour be different if they win the general election next year?

“Shadow health secretary Andy Burnham has said that private sector deals in the NHS should end until after the election and Labour has promised to repeal the 2012 Act. We need a proper Labour Party in government and the more people who back this the better as we can then sweep away these Tory policies currently crushing this life saving institution,” said Barbara.

Many Labour MPs and prospective parliamentary candidates (PPC) back the march and its aims.  As it set off from Darlington on Tuesday the local Euro MP Judith Kirton-Darling was alongside Fiona Dent, the Windsor PPC, and Louise Baldock, a UNITE member who is Labour’s PPC for Stockton South, who said, “the NHS is key to the next election.”

“It is great they are here,” said UNITE community member David Connor, who suffering from depression often relies on the NHS, “and it would be marvellous if thousands of UNITE members joined them. Please come and join other members of the public and walk with us as it is in your best interests to do so.”