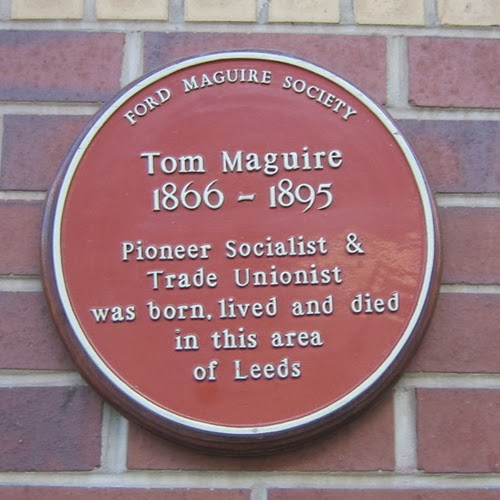 The life of socialist and trade union organiser Tom Maguire is commemorated with a red plaque in Leeds Central Bus Station in St Peter’s Street. He was born not far from there in 1866 and although he died tragically young, Maguire was an inspirational political activist and theoretician admired by, amongst others, William Morris.

Maguire helped co-found the Labour Party’s forerunner, the Independent Labour Party. However, it was as the leader of the 1890 Leeds Gasworkers’ Strike that he rose to prominence when in spite of being opposed by armed troops he organised widespread solidarity action and led workers to a famous victory.

Maguire’s name is born by the (Isabella) Ford-Maguire Society which organises events around the socialist, feminist and radical history of Leeds.

For more on the life of Tom Maguire see: -