Piece taken from Everton FC: the first kings of Anfield 1890/91. 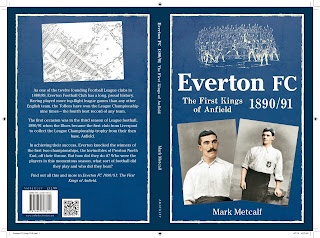 Sunderland travel to Everton this Thursday. It is a fixture that dates back to 1890-91 when in Sunderland’s first season in League Football the Toffees won the top-flight title for the first time in their history.

The game took place under quite different conditions compared to today. Goalkeepers were allowed to use their hands in any part of their own half; there were no substitutes, penalties or even nets. Each side nominated an umpire to control the match and only if they disagreed with a decision would the referee – standing on the touchline – intervene to decide. Pitches had few markings and in the winter they would often resemble mud baths. The ball was often misshapen and players’ boots were largely adapted workmen’s boots that had studs hammered into the soles. The offside rule required three, rather than two, players to be between the attacked and the goal. Strips had no advertising on them. Despite the differences there was still some good football.
The two great clubs faced each other three times in 1890-91 season and Sunderland won two of these games with Everton winning the first in a game played on 15 November 1890 at their ground for the time, Anfield.

Sunderland had been in special training for the fixture and according to the match report in the Journal they arrived ‘in the peak of condition and as hard as nails.’ The crowd was a good one and included a number of Wearsiders who had travelled that morning on an excursion train. The match opened at a frantic pace but the away side were grateful to fine ‘keeping by Ted Doig who thwarted Fred Geary and Edgar Chadwick with great saves. When the keeper then saved a powerful shot from Andy Hannah he was beaten by Hope Robertson to give Everton a half-time lead. Despite the reverse it was reported that Sunderland fans ‘continued to roar their appreciation for their side.’
The second half saw both sides trade blows but Sunderland were just unable to grab an equaliser and when ‘the final whistle blew a splendidly contested game ended with a narrow win for Everton.’
The return League fixture took place on 20 December 1890 at Newcastle Road and saw bottom-placed Sunderland beat League leaders Everton 1-0. Heavy frost meant the game was in doubt beforehand and this may have contributed to the disappointing 12,000 crowd inside Newcastle Road. The match was given added impetus by the knowledge that the sides would play each other again on the same ground a few short weeks later in the FA Cup; a competition rated of greater importance than the League, which was only in its third season.
The goal that helped take Sunderland off bottom spot came in the second half when Dave Hannah smashed the ball beyond David Jardine in the Everton goal. When the final whistle sounded ‘there was great enthusiasm from the home supporters’ reported the Daily Chronicle.
The sides re-met in the FA Cup on 17 January 1891 and the match attracted Sunderland’s then record crowd of 21,000. Everton arrived the day before the game and stayed in the Roker Hotel. Sunderland employed an army of men to clear six inches of snow from the pitch to ensure the tie could go ahead. The North East Railway company had run special excursion trains from all over the district and these were well patronised.
When the sides entered the arena there was a state of great excitement. The Everton keeper Jack Angus, who had previously played for Sunderland, did well to prevent a number of shots from Sunderland entering his goal. The match proved to be the custodian’s last match as he died in the summer of 1891 at aged just 24. A nice piece of play between John Smith and Johnny Campbell created the space for the latter to make it 1-0 amidst great enthusiasm. When Everton replied, Doig saved splendidly on a number of occasions.

As the game moved towards its conclusion the away side found it almost impossible to exert any pressure on the home rearguard and the match ended in a deserved success for Sunderland when it was reported by the Newcastle Daily Chronicle that ‘Loud cheers rang around the ground and were repeated again and again outside the gates as the victorious Sunderland team returned to the clubhouse.’
Sunderland were to make it through to the last four of the FA Cup before losing to Notts County after a replay.
Fans who are interested in finding out more about Sunderland and/or Everton in 1890/91 may be interested in attending my talk at 1.15pm on 26 December at St Lukes Church, Goodison Park. (The Church is on the corner of the ground)  Entry is free.
Everton FC: the first kings of Anfield costs £12.99 and is published by Amberley Publishing.
Posted by Mark at 00:47