It is just over twenty years ago that Northern Ireland failed to deny the Republic of Ireland a place in the 1994 World Cup finals when a late equalising goal by Reading’s Jimmy Quinn silenced an abusive Windsor Park crowd.

The 1-1 draw opened up an opportunity for Niall Quinn, then of Manchester City, to make his second appearance at the World Cup finals but in the event a cruciate ligament injury ruled him out of the tournament in the USA. A disappointed Quinny returned to the Ireland side in a 4-0 win against Liechtenstein in October 1994 and he scored twice.

Niall Quinn was a key player in the period in which Ireland was at their very best and no-one in the World relished playing them. He made his debut in the Iceland Triangular Tournament held in May 1986 in which Ireland marked their emergence as a force to be reckoned with by winning. A year later, Niall Quinn made a substitute appearance in a famous 1-0 victory at home to Brazil and in 1988 he was sent from the bench by Jack Charlton to hold the ball up in the latter part of the wildly celebrated 1-0 victory over England at the European Championship finals in West Germany.

Two years later, Ireland were set to exit the World Cup finals in Italy when Quinn slid in to net against the Dutch and by drawing 1-1 in Palermo Charlton’s side moved on to play, and beat, Rumania in the final sixteen of the tournament. The scenes which accompanied David O’Leary scoring the winning penalty, in the shoot out that followed the 0-0 draw, will live long in the memories of the thousands of Irish fans who were there and the millions watching back home. In the quarter finals a heroic battle with the hosts ended with Ireland unluckily exiting 1-0. 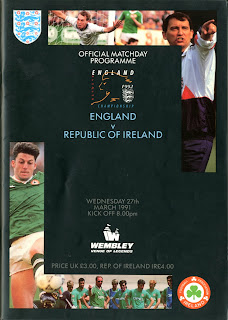 Quinn buried a brilliant header at Wembley in a 1-1 draw with England on 27 March 1991 and would have qualified for a place in the European Championships if Ray Houghton’s late shot, that beat David Seaman, had not missed by inches. Almost exactly two years later, Niall Quinn again scored with a great header as Ireland beat Northern Ireland 3-0 at Lansdowne Road.

Quinn suffered a second cruciate ligament injury in 1996 and he was forced to listen to rumours that his football career was over before he returned a year later to the Irish squad that missed out on a place at the France 1998 World Cup when Mick McCarthy’s side lost to Belgium in the play-offs featuring sides that had finished second in their group.

There was further disappointment two years later when Ireland exited the European Championships by losing to Turkey in the play-offs. Niall Quinn, who was starting to establish a new partnership with Robbie Keane, who had replaced Tony Cascarino in the starting X1, scored in the last group match away to Macedonia. Ireland was only seconds away for qualifying for the finals when the home side equalised and denied the away side top spot at Yugoslavia’s expense. 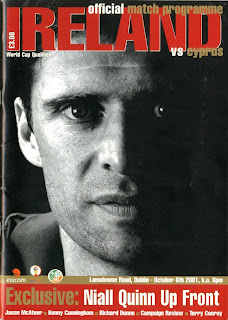 Having represented his country with distinction for over 13 years then many felt Niall Quinn, by now playing for Sunderland, would struggle to play again at a major tournament. Ireland proved most pundits wrong by pushing Portugal all the way in their World Cup qualifying group and by doing so knocked out Holland. A 2-1 aggregate success in the play-offs against Iran helped ensure Quinn was back at the finals for the second time. Prior to the tournament, the striker kept an earlier promise to himself to donate proceedings from his testimonial match, featuring Ireland and Sunderland at the Stadium of Light, to charity. Quinn was entitled to a testimonial match after playing more than 75 times for his country. 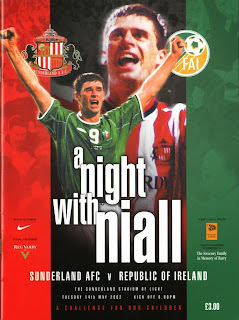 Playing in Japan, Niall Quinn came off the bench to set up Robbie Keane for the equaliser against eventual finalists Germany. He then had his shirt almost torn off his back against Spain and from the resulting penalty Robbie Keane sent the last sixteen tie into extra time. With no further goals, Ireland subsequently exited the tournament on penalties. It was to be Niall Quinn’s last game for his country and he left having scored 21 times for Ireland.

THE MIGHTY QUINN covers all Niall Quinn’s football career including his international and club appearances. It is 25,000 words long and includes approximately 50 photographs and illustrations.
Posted by Mark at 09:28