Part of the Rebel Road series at Unite education

Ralph Winston Fox
There is a memorial bench for Ralph Fox (30-03-1900 to 27-12-1936) in his hometown of Halifax. It is located in the Piece Hall, around five minutes walk from the train station. The journalist, novelist and historian was killed fighting Franco’s forces in Spanish Civil War. He was a well-known member of the Communist Party of Great Britain (CPGB) and wrote biographies of the Russian revolutionary Vladimir Ilyich Lenin as well as Genghis Khan. 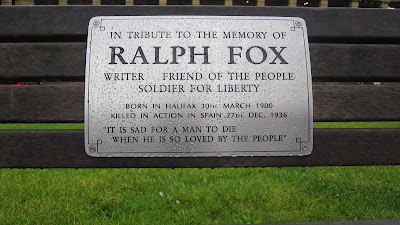 Fox studied modern languages at Oxford University, where he was drafted into an officers’ cadet regiment only for the First World War to end before he saw active service. On his return he became active in efforts to half the British blockade to overthrow (Lenin’s) Bolshevik government which had assumed power following the Russian Revolution of 1917. In 1920, Fox travelled to the Soviet Union and returned convinced of the need to overthrow capitalism. After successfully completing his studies he later began work for the CPGB and completed his first major book. He later worked for the Daily Worker as a columnist and wrote several books for the Communist press.
In 1936, Fox joined the International Brigades in order to fight fascism in the Spanish Civil War. These were military units composed of volunteers from different countries and who travelled to Spain to help defend the Second Spanish Republic between 1936 and 1939. The Brigades base was in Albacete and where Fox received training before being assigned to the XIV Brigade. He was sent to the front  during one of the first operations in which the Brigades were involved and died at the Battle of Lopera in the province of Jaen in late December 1936.
For Unite members interested in finding out more about Ralph Fox see:-
http://www.marxists.org/archive/jackson-ta/articles/1937/fox_writings.htm
Posted by Mark at 04:04