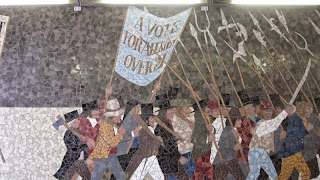 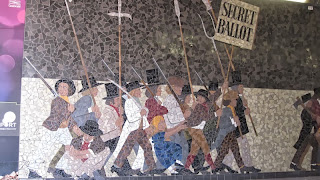 A 115 ft-long mural that depicted Newport’s historic role in democratic reform has been pulled down. The destruction was called ‘absurd and tragic’ by actor Michael Sheen – www.walesonline.co.uk/news/wales-news/absurd-tragic-michael-sheen-criticises-6203409

The mural depicted the November 4th 1839 Newport Rising, the last armed rebellion in Britain when led by John Frost more than 3,000 marched to Westgate Hotel in the town to demand the release of several Chartists held there. Twenty-eight soldiers inside the hotel were ordered to open fire on the crowd, at least twenty of who were killed and fifty wounded. Frost and other leaders of the match were subsequently found guilty of high treason and transported for life.

Chartism was a working-class movement for political reform that existed between 1838 and 1848 and which took its name from the People’s  Charter of 1838. This had six basic reforms to make the political system more democratic:
1) A vote for every man over the age of 21
2) A secret ballot for elections
3) No property qualification for members of Parliament
4) Payment for MPs (so poor men could become one)
5) Constituencies of equal size
6) Annual elections for Parliament

The artwork for the mural was completed in 1978 and consisted of 200,000 pieces of tile and glass at the entrance to John Frost Square in the centre of Newport. Artist Kenneth Budd created it and took four months to research the rebellion story before completing his designs.

Labour led City Council has now pulled down the mural, cowardly doing so unannounced in order to prevent local people from physically opposing them. This has led to angry protests internationally. It will make way for a £100 million shopping centre. 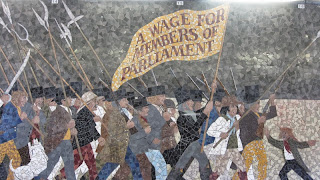 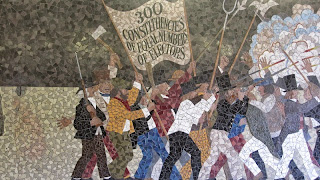 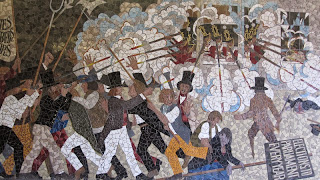 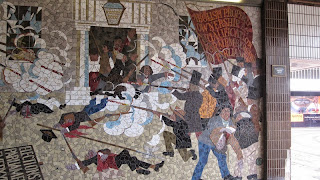 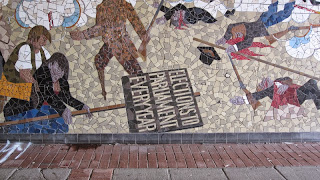