Having easily beaten Liverpool at home in September, and also recorded their first ever victory at Anfield courtesy of a single Sandy Turnbull goal at the end of the previous season table topping United were intent in making it three wins in a row against a Liverpool side back 12th place 14 points behind the leaders. The Scousers had also lost five games at home including their previous game 1-0 against Manchester City.

However, and not for the last time in matches between Liverpool and Manchester United, the form book was torn apart and so was the Manchester United defence, especially in the first half, on this occasion. The match had originally been planned to take place in January but frost had caused its cancellation. As a result, with no such thing as floodlights for another 50 years or so, the game took place in the middle of a working day cutting the size of the crowd substantially to just 10,000. Ted Dalton was given his debut for Manchester United, replacing the injured Burgess, whilst there were also appearances for Downie and Picken as replacements for Bell and Sandy Turnbull. At the same time Liverpool were also forced to field a weakened side with Hardy, out through a knee injury, Maurice Parry and James Bradley’s places taken by Ted Doig, Thomas Chorlton and James Harrop respectively.

The small crowd witnessed an exciting match in which it took only 3 minutes for Liverpool to take the lead, Joe Hewitt fastening on to a centre from Goddard to crash home a magnificent shot that caught the underside of the bar before flying into the net. Nine minutes later Billy McPherson was onto another Arthur Goddard centre to make it two, Robbie Robinson then knocked home a Jack Cox cross for 3-0 before McPherson drilled in the fourth on the stroke of half-time. Already Manchester United had conceded more goals in 45 minutes than in the whole of ninety minutes in any other game that season - back in 1895 Liverpool had battered Newton Heath 7-1, could they equal or even better this in 1908?

Doig however gave the away side a lifeline at the start of the second period dropping a Robert’s free-kick to a grateful Wall to make it 4-1 and then misskicked to present the United outside left with his and his sides second.  4-2 - was a famous comeback now on, but when McPherson made it 5-2 the answer was no especially as Robinson then made it 6-2. However the away side were determined to go down fighting and despite being four goals down they pinned the home side back around their penalty area with Turnbull and Bannister reducing the arrears to 6-4 with quarter of an hour left. It was now a game which no spectator could take their eyes off. Doig made a marvellous save from Meredith as Manchester United pressed, before Hewitt, who had been outstanding during the game, finally ended any doubts about who would win by making it 7-4 and when the final whistle sounded “the enthusiasm equalled anything seen on the ground for many a long day. Absentees may think United were not trying too hard. They were” reported ‘The Football Field.’ It had been a truly marvellous match, one which must go down as one of the finest ever between the two sides. 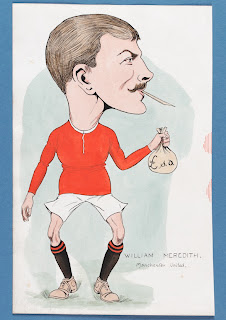