Should grouse shooters bog off? Ban the burn in Hebden Bridge

Blanket bog is known to reduce flooding risks. So why is public money helping to fuel its’ destruction at the expense of subsidising grouse shooting? Residents of a flooded West Yorkshire market town have now launched a Ban the burn campaign designed at reversing the destruction of one of the UK’s most vital habitats. The outcome will have implications for rural and urban areas right across the country.


When the Upper Calder Valley was hit by heavy, prolonged rain earlier this year the picturesque town of Hebden Bridge was hit hard and flooded on two occasions, resulting in a £11 million clear-up bill and forcing some businesses to permanently close.
Meantime there was better news for local businessman Richard Bannister, the owner of the upland Walshaw Moor Estate (WME), who it was announced in June would receive £2.5 million of public money over the next decade under an Environmental Stewardship agreement with Natural England.

The news came soon after Natural England (NE) dropped plans to prosecute the WME on 43 grounds of unconsented damage, including converting a stream to a track. Seven years ago the estate was successfully prosecuted for building on protected habitat. A dissatisfied RSPB has now submitted a formal complaint to the European Commission regarding NE’s dealings with WME, alleging, amongst other complaints, it fails to protect the very sensitive blanket bog habitats on the estate.

NE’s action follows the decision by the organisation in March 2012 to withdraw its Vital Uplands plans that proposed re-wetting all peat and blanket bog.  The Moorland Association, mainly grouse shooting owners, of which Environment Secretary Richard Benyon is one, had lobbied hard to block restrictions on moorland burning, a practice employed to generate young heather growth for shelter and food for grouse. 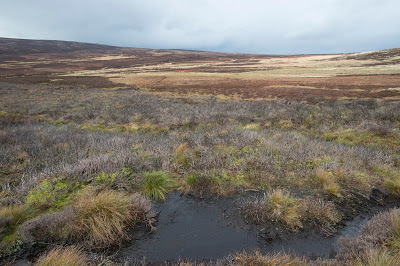 Since Bannister purchased WME in 2002, the numbers of grouse have risen from 100 brace to 3,000 and there is regular burning of the blanket bog. A new drainage system facilitates further peat drying.


Blanket peat bog is found on gently undulating ground with high rainfall. Peat forms, often over thousands of years, from the partial decomposition of wetland plants, especially Sphagnum moses. It is one of the most extensive habitats in England, covering around 245,000 upland hectares and vital in storing more than 3bn tonnes of carbon. Environmentalists fear that the loss of even 5% would double the UK’s annual emissions.
According to NE: ‘Blanket bog can also secure high water quality and reduce flood risk downstream through slowing hydrological pathways.’
Knowing all this, Hebden Bridge residents are seeking to prevent burning on local upland areas. Ban the burn was formed in August. Active member Dongria Kondh, President of the towns socialist Trades Club, said: “We do not object to money going to landowners. But with increased flooding risks we need the burning to stop, drainage ditches removed and time given to allow revegetation of the peat habitat that acts as a buffer to water running down into the valley. We also want carbon emissions reduced.”
With the RSPB case expected to take a year to reach the European Commission, Dongria said the group would concentrate on monitoring activities on the WME, whose owner has yet to comment on growing local dissatisfaction at his actions.