Clinical tests that can provide objective evidence of organophosphate [OP] pesticide poisoning have been confirmed after the release of a specially commissioned Department for Environment, Food and Rural Affairs [Defra] report. The results should assist potential sufferers visiting their doctors, including thousands of shepherds and also military personnel known to be have been exposed to the neurotoxins during tours of duty in Iraq and Afghanistan. 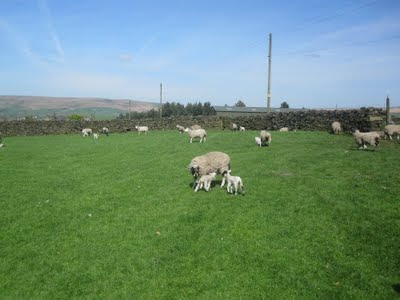 Dr Sarah Mackenzie-Ross from the University College London first became aware of the dangers of OPs twenty years ago when she was asked to be a medical expert for a solicitors firm representing first Gulf War soldiers and farmers convinced their multiplicity of illnesses were OP related.
In 2004 she applied for a Defra research grant to undertake further studies over a four-year period saying: “that whilst there is still a lot of controversy about OPs there is general acceptance that high level exposure will make you ill.  There is much less agreement about the low-level exposure shepherds and farmers are calculated to experience.”
The study found that farmers with low-level exposure have greater health problems than a controlled group not using OPs.
“We couldn’t prove causation but our analysis allowed us to conclude that there was a possible association between exposure and the farmers ill-health. This has been accepted by Defra, who’ve put our paper on their website. The work has also just been peer reviewed and published in a Scientific Journal, which is pleasing as it means our conclusions have been accepted by some of the top scientists in the land” said Sarah.
Littleborough sheep farmer Brenda Sutcliffe has welcomed the Doctor’s report, whilst at the same time questioning why it has taken so long for a government backed report to support what its leading scientists said almost sixty years ago. In 1951 a team led by Professor Solly Zuckerman discovered OP exposure could produce a range of symptoms including memory loss, depression and schizophrenia. It recommended OP products be labelled ‘deadly poisons.’ Zuckerman’s report lay hidden in the House of Commons Library until Brenda discovered it two years ago.
Sutcliffe, who along with her family became seriously ill after government regulations compelled them to use OP sheep dip, has fought a tireless campaign since 1992 to highlight what she is certain are the links between OPs and the high level of suicides amongst shepherds - 1,000 killing themselves between 1996 and 2005. A specially produced booklet of her papers, entitled ‘Cause and effect - the search for the truth’, that includes an examination of the possible causes of Gulf War syndrome, has enjoyed a wide readership.
“I am full of praise for Sarah and her team as they have done a brilliant job and the fact that it was funded by the government gives it perhaps greater credibility than other reports. Anyone going to the doctor can now say here is a scientist that has produced a report funded by Defra that shows low level exposure is dangerous - I very much welcome that. Of course the report shouldn’t have been necessary as it’s all been done before” said Sutcliffe whose local councillor is Peter Evans.
He currently sits, as one of three Rochdale Borough Councillors, on the Joint Mental Health Overview and Scrutiny Committee for Pennine Care NHS Trust. Five local councils, to consider issues affecting the health of local people, established the Committee. 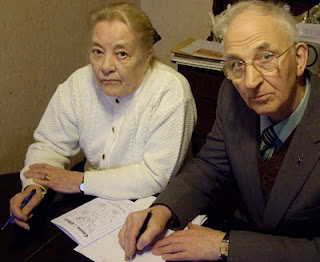 Brenda Sutcliffe and Peter Evans
Evans has been concerned for many years about the high levels of mental illness amongst ex-soldiers and talks of his “despair at figures showing that 8,500 are currently serving time in Her Majesty’s Prisons.”
He’s convinced that many have been affected by the OP products used in insecticides sprayed on tents and vehicles to protect soldiers from desert mosquitoes. He welcomes the new report and has moved, with the committee’s support, to have details circulated to all coroners’ courts. He is now working on how best to inform doctors saying “it’s vital that we let people know there is such a test so we can start identifying and helping people suffering from organophosphate poisoning.”
Posted by Mark at 06:10