Note - all photographs are courtesy of Mark Harvey of ID8 photography and are not to be reproduced without written permission.

Over 350 people today (Saturday 27 March 2021) attended the Kill the (Police) Bill event in Manchester that was called by persons unknown. Most of those who assembled in St Peters square, location of the famous Peterloo massacre in 1819 when, at least, 15 demonstrators were butchered by cavalry who charged into a crowd of 60,000 who had gathered to demand parliamentary reform, were well under 30. There were two labour movement banners – one UNISON and one USDAW. Later 7 striking bus workers at GNW who are members of Unite arrived but chose not to take up an offer to speak. This seemed more a case of inexperience that anything else. 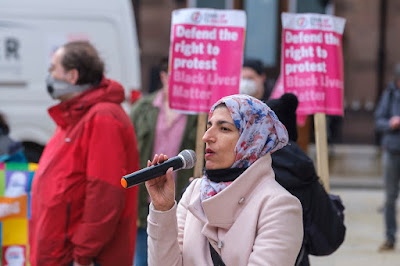 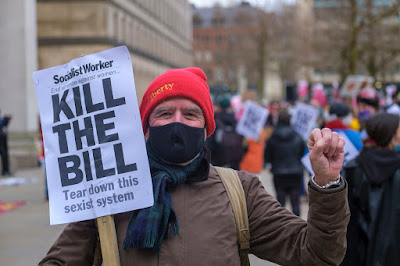 As the crowd assembled outside Manchester’s Central Library, the opening speaker stressed the need for people to maintain suitable social distancing and, in general most did. There were a number of speakers and many in the crowd responded with warm applause to a series of points on, amongst other topics, racism, sexism and police violence. 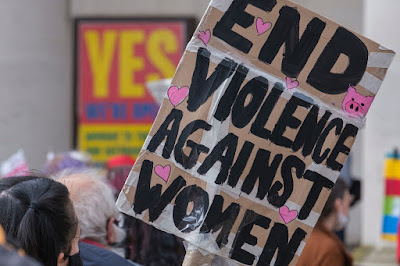 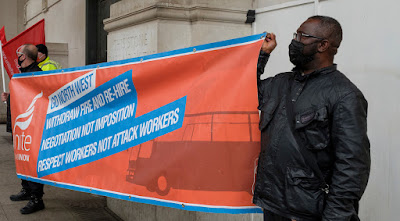 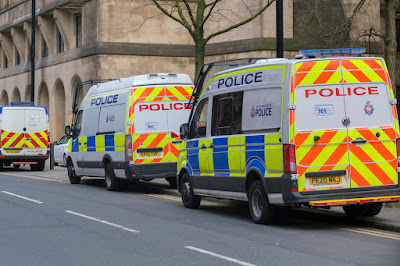 The Greater Manchester Police (GMP) had a number of officers sitting in vans close to the unofficial rally but did not intervene. The event took place with Legal Observers present. There was a convivial atmosphere and it was clear that those who had turned up felt it was a worthwhile experience.

After an hour or so the crowd moved off to hold an impromptu march through Manchester and demonstrators took to the roads and on a number of occasions blocked off, by sitting down, traffic, which was very light, and a main tram junction. The amount of disruption was minimal. Amongst the chants was ‘whose streets, our streets’ (and they certainly were as there was very few people around) and, to the tune of ‘Oh Jeremy Corbyn’, ‘Oh Johnson’s a wanker.’ The crowd swelled to around 500 at one point. 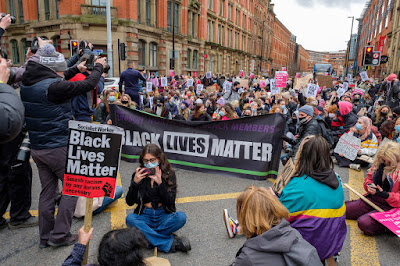 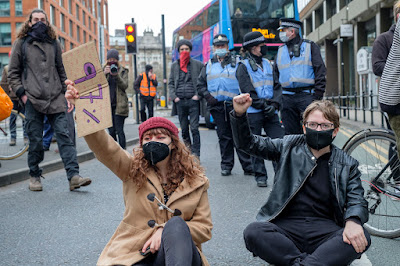 The march proceeded to a mural of George Floyd and where the crowd took a knee for 8 minutes and 46 seconds, the time that one of four American police officers who arrested him knelt on the African American man’s neck and killed him in Minneapolis in May last year.

The crowd then proceeded back through Manchester City Centre and I myself left at 4pm  when the event was still going on and at which point there had been no arrests or antagonism between demonstrators or GMP officers.