On Saturday 23 March I accompanied walkers on the eighth day of the Nigel Farage pro-Brexit walk from Sunderland to London that is due to arrive in the capital six days later - March 29, 2019 being the date Britain is meant to exit the European Union.

This eighth day began in the small village of Linby where a crowd I counted at 272 people had assembled to make the 10.3 mile walk to Beeston.  This well dressed group flew their various Union Jacks and held up ‘Leave means Leave’ and ‘No deal is better than a bad deal’ placards.

It was a beautiful spring day and people were in a good mood. One person asked me why I was there and even when he found out I was not pro-Brexit he was happy to chat. This willingness to engage in discussion with me proved to be the case over the next 5 hours although — with just one exception - I did not initiate the conversations I got engaged in.

What I did do was listen to conversations by walkers and watch what was happening. This is my observations.

The most obvious thing to say is the numbers on the walk were small throughout the whole day, perhaps peaking at 300 before dropping down to under 200 by the time it reached Beeston around 2pm. The crowd was virtually all white, the average age was around 55 and had more men than women on it. A number required lifts from the accompanying mini buses on various occasions. At no time was their more than a handful of people who came out to welcome the walkers and Beeston was not exactly lively when the walk ended without even a final rally.

Prior to the start, Nigel Farage gave a short speech on top of the open ‘Believe in Britain’ battle bus stating “We will get Brexit, whatever happens.” He did not sound exactly convincing but he drew cheers as we then set off on the main road only to turn off almost immediately and head down a small countryside road where there was exactly no one.

This was to be a practice that the organisers adopted for a significant part of the day. This was apparently done in order to avoid Farage being caught in front of the giant video screen that was being hauled along any roads big enough to take them by the anti Brexit group ‘Lions led by donkeys’. These screens continuously broadcast some of Farage’s previous statements that have not aged well as they showed he is very much a member of the elite he regularly berates and made a number of inaccurate statements during the campaign for Brexit in 2016.

When we did emerge onto main roads to walk on the paths next to them it did not take long for the screen to turn up. The walkers themselves did not seem bothered.

The atmosphere was muted for much of the morning, there was no chanting or singing but quite a significant number of passing cars were happy to hoot their horns in obvious support and this brought thumbs up and occasional cheers.

One tweed suited male of around 40 years who I chatted with was critical of the Common Agricultural Policy as “much of it benefits the French not us.” I asked if he was happy about how it worked in Britain such that £3 billion annually goes to large landowners, some of whom don’t even grow food on the land they get subsidised. He clearly was happy as he would not answer me.

I had a lengthy chat with one of the security personnel of around ten people. Security on the walk was provided by properly trained staff and of which some had military backgrounds. He was happy to admit he was a Tory and so was his wife. He made clear he did not like what he described as “the far right” and it was clear throughout the day that the walk organisers were determined not to be associated with UKIP and when two walkers attempted to fly UKIP flags they were asked to take them down and did so.  At the same time when I overheard at one point one member of a group of 4-5 walkers state that the UKIP leader Gerald Batten was “a likeable person” there was no disagreement. The conversation then moved quickly on to the need to stick together to make sure “Corbyn did not become Prime Minister.” To my surprise, Corbyn was rarely mentioned by people throughout the day.

One the walkers I chatted to was clearly very knowledgable about politics and he had a world view. He was though totally unaware that most of the socialist groups had campaigned for Brexit and he had never heard of Lexit. He was sure that Brexit would lead to Britain becoming “more Tory”, which for him included “looking after our people including the sick and disabled”, and that it would not lead to Britain moving to what he described as “left.” He criticised trade union leaders for what he said were taking salaries “well above what their members earn” and “for getting extra monies above their salaries to buy houses.”

He was sure that if Brexit did not happen there would be trouble and even riots, he could understand why people would riot as it would because “democracy was being denied’  but he was keen to stress he would not get involved himself. I had similar chats with others on the walk throughout the day. None who mentioned trouble occurring said they hoped they were wrong with their predictions.

I then chatted with another man of around 50 who said he was not actually a big fan of Farage as “he’s a politician and I don’t know if he’s doing this for himself or for everyone.” I heard similar discussions take place throughout the day. Farage himself refused to engage when I asked if he felt the walk was a success. Instead he asked my view and when in reply I said there was very few on it he just ignored me.

A number of those on the walk shared the fact that this was their first ever public political event, some had previously attended a rally but none had gone on a demonstration. They were happy to display their placards when anyone was around to see them.

There was one or two walkers who clearly saw themselves as taking part in some great historical occasion with one group discussing how they felt Harold must have found it a lot harder in 1066 when he marched north to fight the invading Vikings near York before marching south to take on Norman the Conqueror, whose victory saw the Normans overthrow the Anglo Saxons.  I couldn’t work out if they saw themselves as descendants of Harold or Norman and I didn’t feel it was my place to ask.

Ireland was mentioned a few times by walkers. On one occasion I heard someone say how over 100 Yellow Vest demonstrators had been blinded by the police using rubber bullets against them in Paris during protests that have been going on for many months now. “That’s because Macron has ordered the police to shoot at the head. When our lads were in Northern Ireland they were told to shoot towards the legs and anyone who was injured badly was unlucky.” There has not been 100 blinded in Paris but clearly Macron is out of order and the use of rubber bullets should be stopped. As regards Ireland though the British Troops often fired directly at people (eg Emma Groves in 1971 and Sean Downes in 1984) and most of those killed by rubber bullets and the plastic bullets that followed were children.

On only two occasions were people we passed openly hostile but whenever anyone failed to respond positively to a hello they were referred afterwards to as remainiacs.

I had a few chats with people about how few there were of them, especially compared to the massive anti Brexit London demonstration that by the time we departed from our lunch time break had started in the capital. No one suggested that the numbers expected when the walk arrives in London on 29 March would be anything approaching a million although some are hoping for over 100,000. There was few who were prepared to answer why they were walking down a series of alleys where no one could see them.

As we moved to walk into Beeston, where we were met by a handful of supporters of the walk and around a dozen from the ‘Stand up to Racism’ organisation that was established by the SWP, a supporter of Lexit, the organisers stopped to put “the ladies in the front”. This annoyed one woman. The move was clearly aimed at the media, of whom there appeared to be none.

As the walk ended and with no rally to attend those that urgently needed a pint called into the nearest pub ‘The Last Post’. Meanwhile as one of the buses that had accompanied the walkers made to arrive it just happened to knock into the ‘Lions led by donkeys’ screen. Whilst no serious damage was done there will be an insurance bill to now add to a walk that is obviously well funded.

Considering the resources put into this walk then if this is all Farage can organise you’d have to say his best political days are gone. 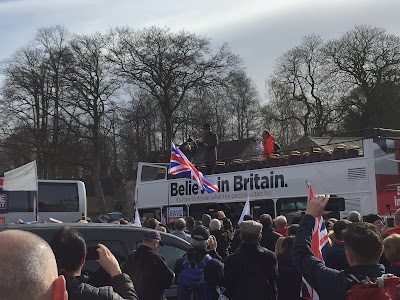 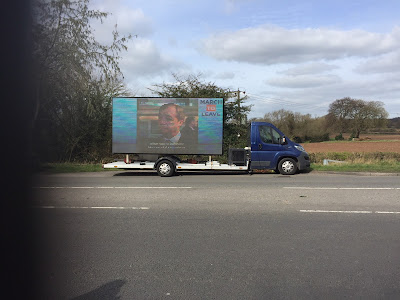 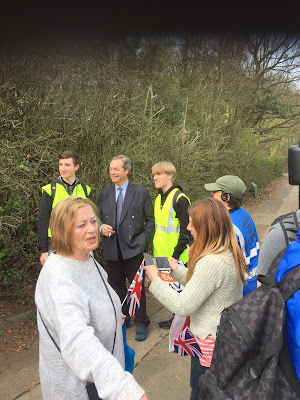 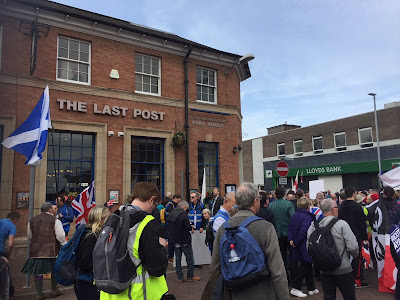