Doubts over Northern Forest
Public money forms small part of project
Environmental campaigners have cast doubts on the feasibility of government plans to create a Northern Forest, with up to 50 million new trees stretching from Hull to Liverpool. Tree cover around major cities would be expected to grow from eight to 17 per cent.
The announcement by environment secretary Michael Gove in January came after just 1,000 hectares of trees were planted in England last year – the smallest figure for many years. Critics have also highlighted how the current HS2 high-speed rail link will decimate 97 ancient woodlands, including 35 north of Birmingham. Sceptics also say a similar new forest announcement in the 1990s has produced only mixed results.
The 25-year Northern Forest project is expected to cost £500 million. The government has promised to provide just £5.7 million, with the rest to be raised by charity. Management of the project will lie with the Woodland Trust and Community Forest Trust.
Unused land for planting
Local tree planting groups are engaged with the Woodland Trust on drawing up its final plans, including how to unlock further funding, a Woodland Trust spokesperson said.
Under the proposals existing community forests such as the White Rose Forest and South Yorkshire Forest will be linked together by getting landowners within the schemes’ boundaries to give over unused land for planting. The Northern Forest will be a mix of native broadleaves, such as oaks, plus coniferous species such as spruce and pine. Landowners will be required to undertake the long-term maintenance of the trees.
Roly Smith from the Peak District, an environmental campaigner and writer, said there are “far too many questions that need answering before the Northern Forest can be taken seriously” and pointed out that the National Forest in the Midlands has only just over half of its planned 13,500 hectares planted since being announced in 1995.
“They intended joining up patchy woodlands but that hasn’t happened,” he said.
Kate Dewey, planning officer from the Staffordshire Wildlife Trust, added that much of the tree planting in the National Forest “is not particularly amazing for wildlife”. Planting trees in itself is not sufficient, she said. “The trees in a Northern Forest need to be part of new projects that create new meadows and habitats. That requires long-term management and landowners will be unsure of getting involved if it costs them money. Public money of £5.7 million is not much.”
Dewey warned against clearing existing ancient forests for HS2. “Many species such as barn owls and great crested newts will be damaged,” she said. “We are trying to get planners to consider some route diversions to reduce the environmental impacts.”
Sheffield Wildlife Trust has also spoken out against HS2, expressing concerns that the loss of ancient woodlands and “their soils, wildlife and historical meaning cannot be compensated for by mitigation techniques”.
Fewer trees being planted
Smith urged the Woodland Trust to make clear how it intended to take forward the government proposals for the Northern Forest. “I hope it is not a case of there being a big announcement to take attention away from the fact that fewer trees than ever are being planted nationally, whilst ancient trees are also set to be sliced down,” he said.
A Woodland Trust spokesperson said: “Once we have more information we will let people know. We believe we have the knowhow to make the Northern Forest a success, but it will rely on many different stakeholders.
“The Northern Forest will be established across all sorts of different landholdings. Paying for projects is usually the hardest thing. A business plan is being drawn up. Sources will undoubtedly include direct tree planting funding, agri-forestry schemes, farming support payments, development levy payments, major donations and philanthropy, corporate sponsorship and individual donations.”
MARK METCALF 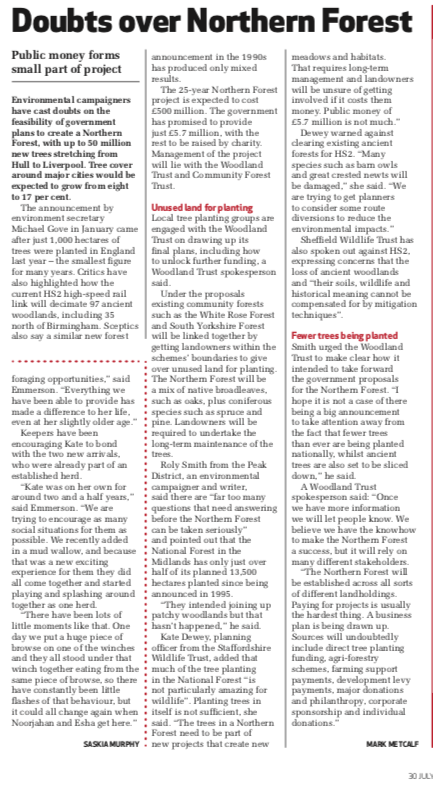