LEAP INTO UNKNOWN FOR LYNX TRIAL

The Lynx UK Trust is seeking support from local farmers for a trial to re-introduce the wild cat to the Kielder Forest.
Across Britain, lynx were hunted to extinction for their pelts by around 700AD. In the last few years though the Lynx UK Trust has been surveying locations and meeting local communities to identify potential release sites for a trial reintroduction of the medium-sized cat, which derives its name from its reflective eyes. The lynx has a short tail, long whiskers, black hair on the tips of its ear and padded paws for walking on snow.
In Europe, the lynx, which feeds mainly on roe deer as well as foxes and hares, is the third largest predator after the brown bear and grey wolf.
It is found in the forests of Western Europe and Russia. Lynx were reintroduced to the Bavarian Forest and the Harz in Germany in the 1990s and the first birth of wild lynx there was in 2002.
Restore habitats
Lynx UK Trust, which includes a group of expert feline conservationists, last year identified an area of 1,810 square kilometres, two-thirds of which is forested, in Kielder Forest in Northumberland as its preferred trial location.
But the Daily Express described the animals as “the size of small lions ready to pounce” and claimed “alarmed farmers say it could lead to savage attacks on livestock and even children”. The National Farmers Union (NFU) said the issues affecting livestock farmers had not been property considered.
For the trust to hold a trial to reintroduce lynx it must submit an application to Natural England. It aims to make the Kielder application this summer, a year behind schedule, but only after it has spoken to more farmers in the proposed trial area.
“We realised we needed to reassess,” said Adam Eagle, spokesperson for the Lynx UK and a supporter of the growing number of rewilding projects that aim to restore habitats to their natural state. “Whilst we have been talking to organisations that represent some farmers, such as the NFU and the National Sheep Association, we believe it is also essential to speak to individual people who would be affected by a trial.
“On the weekend of 14-15 January we called on over 50 isolated rural dwellings and sat down over cups of tea and had chats with the occupants, including many sheep farmers.”
Eagle disputed the Daily Express claims. “In Germany there are no reports of attacks since lynx were reintroduced over two decades ago,” he said. “Lynx feed mainly on deer, which no longer have a predator. The result is an ever growing deer population that eats large areas of young trees, thus preventing reforestation.
“We don’t cull enough deer and so in addition to bringing back something that is native to the UK – and which in our talks in schools is inspiring children – we can also solve some of our ecological problems.
'Serious concerns'
“We understand sheep farmers have questions they need answering. So we have been taking our information to them so they can hear both sides of the arguments.
Where concerns have been raised we shall search for solutions. It has been a worthwhile exercise that is ongoing.”
But Claire Robinson, NFU countryside adviser, said the organisation remained concerned about lynx “preying on lambs in a remote upland area dependent on sheep farming”.
She added: “The environment has changed and the population has increased dramatically since lynx last appeared. No application to Natural England has yet been made and we will continue
to engage with the licensing body to raise our members’ serious concerns. Efforts would be better focused on retaining current biodiversity.”
Good for business
Rob Hersey, owner of Wild Northumbrian Tipis & Yurts based in Tarset, said he was certain the lynx would be good not only for his business but, more importantly, for the environment at large.
“Northumberland has been ravaged over past times,” he said. We are planning a new woodland on our site and encourage people, where we can, to think about rewilding themselves – to help improve the landscape and the wildlife mix.
“So the idea of bringing back lynx is absolutely natural to us. We feel it would be beneficial in lots of ways.
“They would stabilise the local ecosystem, while attracting lots of tourists to the area, which would be good for us and many other businesses up here.
“We already have the dark skies status, which is wonderful, but now we really should be looking at the landscape and wildlife. We have the resources here that would be emphasised by something as dramatic as the reintroduction of lynx and, if it does go ahead, I think it would be very, very good for the whole area.”


A spokesperson for the Forestry Commission in England said: “We will respond to any license application to release lynx either in private land or on land we manage in England. We remain neutral until we have seen evidence-based analysis of the effect of any proposal the Lynx UK Trust make on the populations of wild deer.” 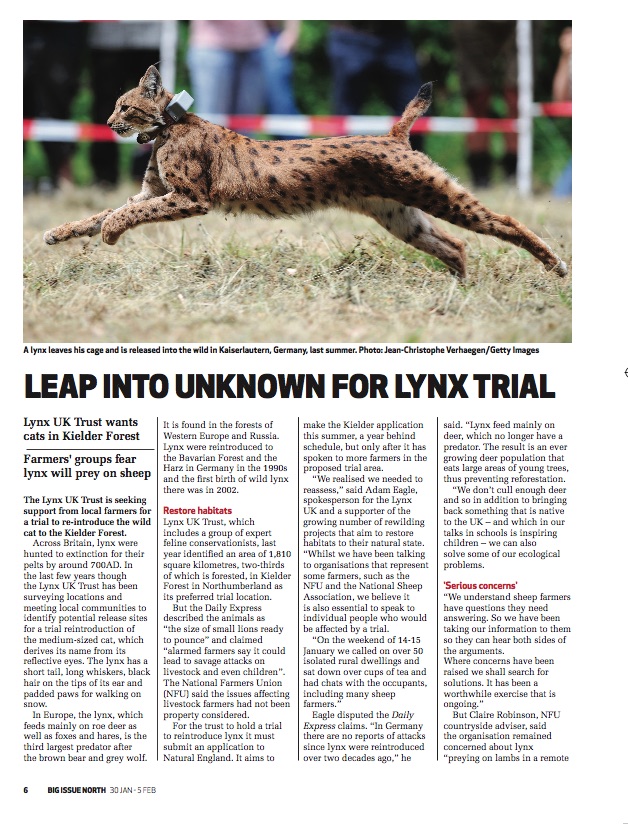