This article is taken from the unite Landworker magazine of Spring 2015.

A riding holiday in the early 1970s brought Kate, aged 10, into contact with Lady Sylvia Sayer whose impassioned defence of Dartmoor included later snubbing the Prince of Wales over his plans to allow continued military use on the South Devon moorland.

“She was 50 years older than me but became my role model. I thus went to public enquiries as a youngster and was never afraid to speak out on the need to protect vital wild country that is great for recreation and creates feelings of freedom and renewal.”

Kate was just 22 when she became general secretary in 1984 of Open Spaces, a membership based charity formed in 1865 and which campaigns to protect local common land, town and village greens, open spaces and public paths.

Over the years, Kate has successfully stopped the likes of Andrew Lloyd Webber and Keith Richards closing off footpaths to the public.

Following a lengthy campaign she used bolt cutters in 2003 to unlock gates in East Sussex. These had been unlawfully fastened by a company associated with real estate magnate Nicholas van Hoogstraten, who had called ramblers the ‘scum of the earth.’  Walkers’ access to a path that had been blocked for 13 years was finally achieved.

“I enjoy getting paths opened and often you need to campaign to make this possible. Some people accuse campaigners of always saying no, but I’d contend that much of the landscape we enjoy is still free, beautiful and open because collectively we have saved it,” said Kate, who at aged 27 was the youngest person ever elected onto the Ramblers’ national committee.

Naturally delighted by the passing in 2000 of the Countryside Rights of Way Act (CROW) that the Ramblers’ Association had long sought, Kate remains frustrated that not all uncultivated land is covered by the act. Labour’s need to get its legislation through the House of Lords meant it was prepared to concede to Liberal Democrat demands that access should be denied to land that had been improved or semi-improved. This meant that when the Countryside Agency undertook its defining process the result was a number of anomalies.

“I live in the Buckinghamshire village of Turville. This is located in the Chiltern Hills, a chalk escarpment of outstanding natural beauty that the public has only part access to even though there appears to be no difference between places we can and can’t walk.

“At this current time the access maps are frozen. But when the government does finally get round to keep to the commitment of a review that was promised after ten years of the act then it must be conducted on different terms,” said Kate.

Whilst public spending cuts have delayed the CROW review they have thankfully not blocked the opening of the Wales coastal path and the ongoing construction of the England Coast Path.

Last year, the then environment minister Richard Benyon sparked anger when he referred to “expensive” schemes inherited from the previous Labour government, adding, “the Coastal Access Bill was a sledgehammer to miss a nut.” A vigorous campaign by the Ramblers and other organisations soon had the government back tracking.

“What has been won in England is remarkable. We have coastal access down to the sea and inland to the nearest coastal boundary. Just recently we obtained a commitment from Nick Clegg that all the works should be completed by 2020. This is recognition that this is important for people’s health and many local economies. It is another example of what can be won by campaigning.”

Kate’s work inevitably brings her into regular contact with politicians. She has no problems with “needing to cultivate relationships with decision makers. If you are a campaigner you have to work out who is going to make decisions and seek to influence them. Sometimes that is not easy.”

As we move towards the May general election there will be many organisations that are seeking to get policy commitments from the major parties that may form the next government.

The Open Spaces 2015 Manifesto wants the next Westminster government to ensure authorities take action against unlawful works on common land, protect village greens and make landowners grants conditional on all public rights of way on their land being unobstructed.

The organisation also wants to ‘promote and protect people’s right to enjoy open spaces close to their homes, as well as our splendid commons and network of public paths.’ It believes citizens should have access to good-quality public open space within five minutes walk of their home.

Interviewed before addressing the Peak and Northern Footpaths Society that promotes the interests of public footpath users across a huge area, Kate said, “We are concerned about major local government cuts for footpaths.

“Cutting off this investment does not save money as footpaths help keep people healthy and deteriorating access paths in the countryside inevitably means people do not visit and this thus reduces spending by visitors in these areas. We need a change in direction under the next government.”

Kate’s busy work schedule, including speaking engagements virtually every weekend, means she has not attended any of the massive anti-austerity demonstrations in London at which the Ramblers have been well represented. She has though been a trade unionist for many years as, “I believe in unions and equality and ensuring everyone has proper rights.”

Union branches who might welcome a speaker from the Open Spaces Society can make contact on 01491 573535 and at hq@oss.org.uk 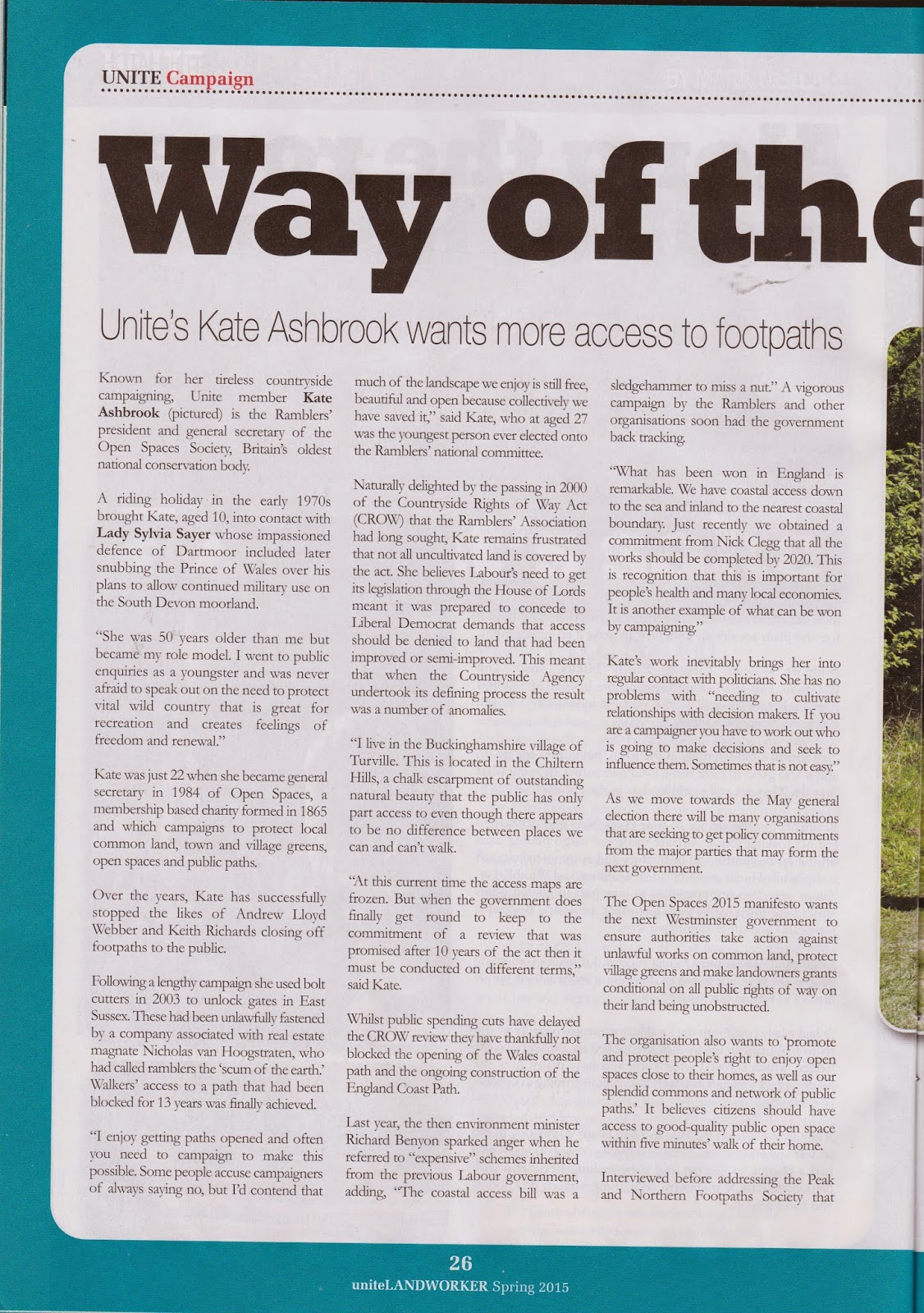 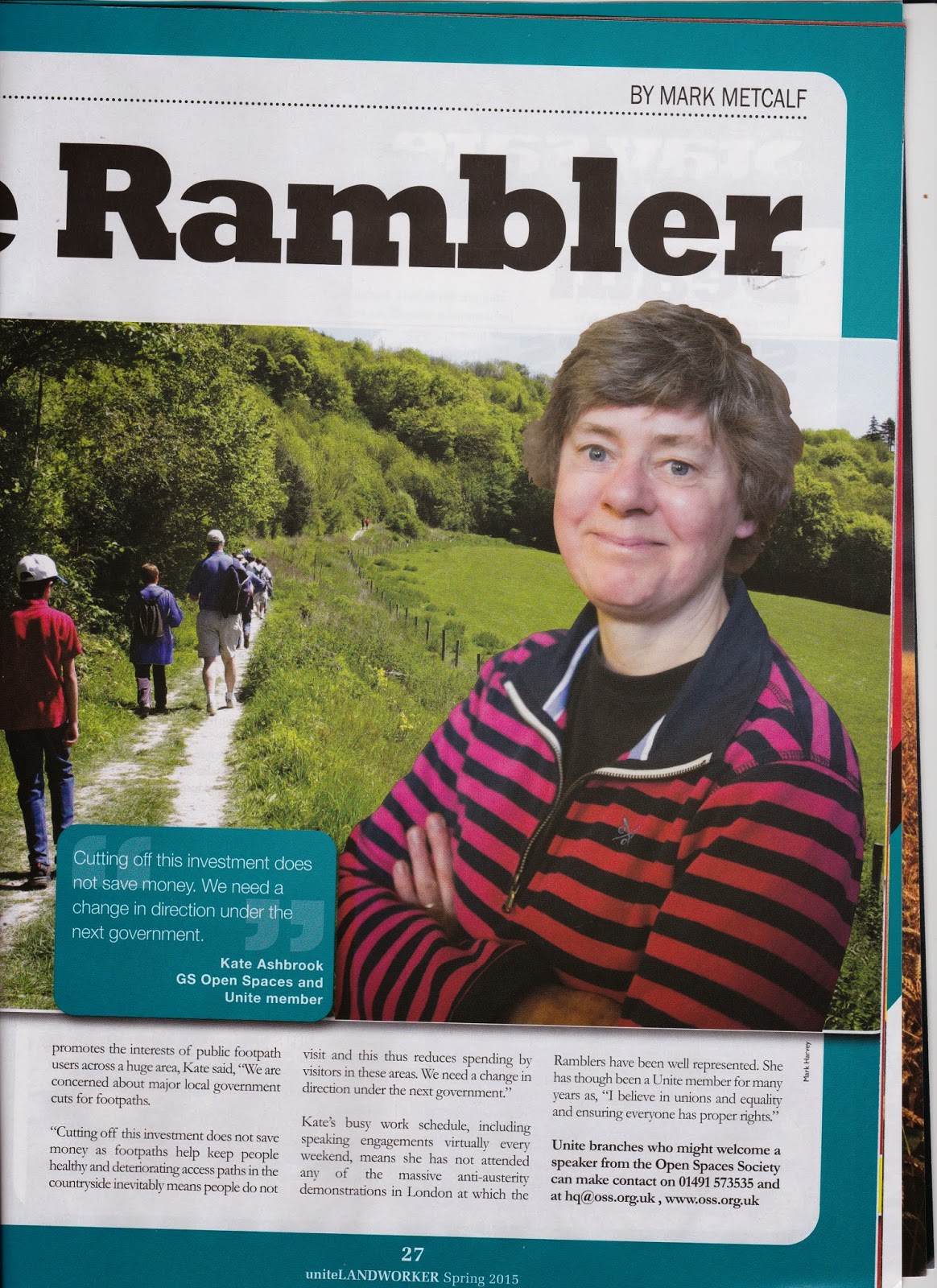