A sculpture which commemorates the Chartist uprising in Newport is positioned outside the Westgate Hotel, where at least twenty demonstrators were killed and fifty wounded on 4 November 1839. 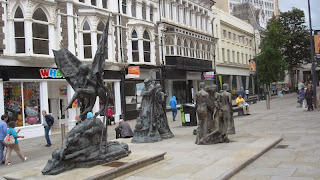 The Newport Rising was the last armed rebellion in Britain when led by John Frost more than 3,000 marched to Westgate Hotel in the town to demand the release of several Chartists held there. Twenty-eight soldiers inside the hotel were ordered to open fire on the crowd.  Frost and the other leaders of the march were subsequently found guilty of high treason and transported for life.

Chartism was a working-class movement for political reform that existed between 1838 and 1848 and which took its name from the People’s  Charter of 1838. This had six basic reforms to make the political system more democratic:

Today all but one of the Charter’s six points are enshrined in law as the right of every citizen.

The artwork was created by Christopher Kelly in 1991 and there are three groups of statues depicting Chartist ideals of ‘Union, Prudence and Energy’.

Ten of those who were shot dead were buried in unmarked graves in St Woolos Churchyard in Newport. 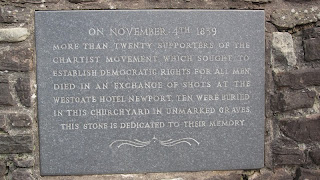