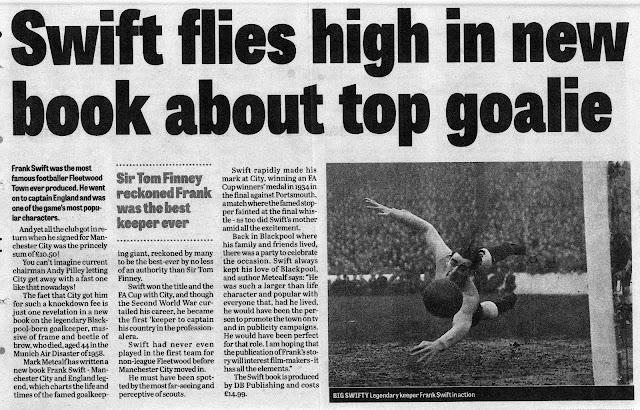 
Below are comments from Halifax Courier of 24 July 2013.

England has produced a string of fine goalkeepers over the years - Gordon Banks, Peter Shilton and David Seaman arguably the most notable.
However, Calderdale author Mark Metcalf has turned the spotlight on a true legend of the game during the 1930s and 40s.
Frank Swift played all his league football with Manchester City and represented England on 33 occasions between 1941 and 1949.
Prolific sports writer Metcalf has chronicled the life and career of this popular figure who went onto become a respected  journalist with the News of the World before becoming one of eight journalists who lost their lives in the Munich air disaster in February 1958.
Metcalf charts Swift’s humble beginnings in Blackpool, and the start of his football career with Fleetwood Town Reserves to his glory years at Maine Road where he helped City to First and Second Division titles as well as victories in the FA Cup and Charity Shield.
Drawing on a number of sources, Metcalf tells Swift’s remarkable story in meticulous detail. The book also chronicles Swift’s record as an England international from his debut during the war years and the moment he was appointed the first ‘keeper to captain his country in the professional era during a 4-0 win over Italy in Turin in 1948.
Metcalf’s research paints a vivid picture of a well-loved character both on and off the field, and the shock of his untimely death on that fateful night in Munich.
Running to 185 pages, ‘Frank Swift - Manchester City and England Legend’ is a welcome addition to the library of footballing greats of the past.
The book contains a small selection of photographs - both personal and professional - and would be a welcome addition to the bookshelves of any true football fans.
in 1998 Frank Swift was one of four City players named in the  Football League 100 legends list, celebrating a century of league football.
Metcalf has done his career and his memory proud.
‘Frank Swift - Manchester City and England Legend’ by Mark Metcalf is published by DB Publishing and priced at £14.99.