Tony Matthews and myself have completed a biography for digital publication by jMD media. It will be published shortly. 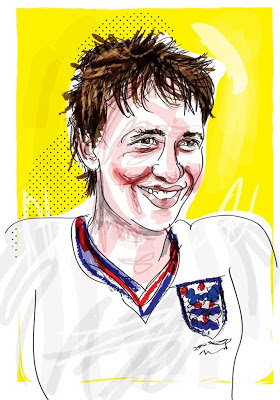 Leicester born Gary Lineker is one of the most popular England players of all time and the only one to receive the Golden Boot award for finishing as top scorer at a World Cup. As his country’s second highest scorer, Gary’s goals-per-games ratio remains one of the best at international level.

From December 1978 until November 1994 Lineker was also a prolific goal scorer with five different clubs - Leicester City, Everton, Barcelona, Tottenham Hotspur and Nagoya Grampus Eight . In an excellent career, he appeared in a total of 568 competitive club games and scored 284 goals.

His goal scoring achievements saw him become the only player to win the English 'Golden Boot' equivalent with three different clubs. He topped the First Division scoring charts with Leicester in 1984-85, Everton in 1985-86 and Spurs in 1989-90.

Lineker won the Second Division championship with Leicester in 1980. In 1985 he was a member of the Everton side that won the annual FA Charity Shield. When he played for Spanish giants Barcelona, he won the Copa del Rey in 1988 and the European Cup-winner's Cup the following year. In 1991 he helped Spurs lift the FA Cup.

Certainly one of the game's nice guys on the football pitch, Gary was never cautioned by a referee and, as a result of this, was honored in 1990 with the FIFA Fair Play Award. In the 1992 New Year’s Honours List he was awarded an OBE. And in 2003 he was inducted into the English Football Hall of Fame.

After retiring as a player, Gary has successfully moved into broadcasting, working at the BBC, for Al Jazeera Sports and also for Eredivisie Live.