Working or not, join the union.

Working or not, join the union.

Now there is a union for everyone. Unite community membership gives anyone who is not in work a chance to join Britain’s biggest union and combine with their working colleagues in campaigning for an improved standard of living for all.

With the coalition government spearheading attacks on the NHS, welfare benefits, educational grants, social housing, jobs and community facilities then this radical initiative is attracting recruits amongst students, the unemployed, carers and pensioners keen to collectively fight back.

To ensure this is the case members get access to a variety of individual benefits and services, many branches have been established and six community co-ordinators have been appointed, including Hillsborough justice campaigner Sheila Coleman.

Sheila will be based in Liverpool, where the CASA Community Branch has hundreds of members. Its activities include support for local people whose ongoing mental health problems have been exacerbated by the destruction caused by Government cuts of  facilities and services that once helped them.

Travelling east along the M62, the Leeds community branch is campaigning against the workfare programme under which benefit claimants are pressurised to work for nothing. 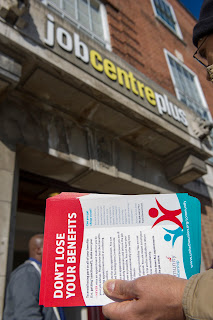 Jobseekers allowance (JSA) rates are currently £71.00 for over 25s and £56.25 for 16-24 year olds. Surviving is the best anyone can hope to do. But with 2.6 million people unemployed, and around one million young people not in education, employment or training, finding work is difficult.

Rather than use public investment to revitalise the economy and create jobs, the Government’s solution is to force people to work for their benefits. Mandatory Work Activity (MWA) placements last four weeks. The Community Action Programme, for those on JSA for over three years, lasts six months and it is predicted that from 2013 to 2018 around one million people will be forced to work under this scheme. Attendance failures can result in benefit sanctions lasting from two weeks to six months, soon to be extended to three years.

This chimes with a much tougher sanctions regime being imposed on all claimants and there have been reports of claimants denied benefits after late running job interviews meant they missed a Department for Work and Pensions (DWP) appointment.

The government claims its actions will combat poverty by helping people find work. But a DWP assessment in June confirmed MWA “had zero effect in helping people get a job.”  Hours later the then Employment Minister Chris Grayling announced he would be extending the schemes!

That’s good news for placement providers such as A4E who the Coalition has given more than £200 million of workfare contracts. Emma Harrison, A4E’s chairwoman and personal friend of David Cameron, paid herself an £8.6 million dividend in 2011 but resigned earlier this year following fraud allegations. A4E has a ‘success rate’ of just 3.5% when it comes to getting jobseekers into permanent employment. 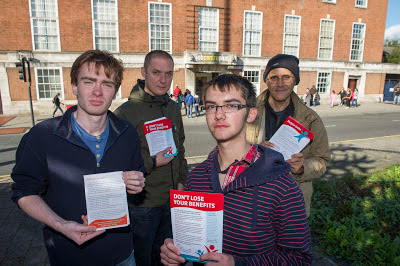 Workfare is bad news for people in work, says 21-year old Leeds community member Jack Dillon, who, despite two A levels and numerous job applications, has been unemployed for a year.

“In Leicester the 2 Sisters Food Group has made hundreds redundant at their pizza factory but have meanwhile announced 100 pre-employment training jobs at their new Nottingham pizza toppings establishment. Without opposition, workfare will increasingly be used to replace paid jobs,” says Jack, who when he was interviewed was part of a branch team at Eastgate Job Centre in Leeds City Centre.

Hundreds of Unite leaflets were given to claimants and there was particular pleasure when one woman used the information to obtain a discount travel card that is available for those on JSA for six months. The branch has also taken the campaign direct to employers and held a picket of the local Argos where they informed customers about the retail giant’s exploitation of the unemployed through its workfare participation.

Callum Stanland is two years younger than Jack Dillon. A Leeds University student he joined Unite, “To show solidarity with working people and bring about positive change in the community.” Callum has been elected to the Unite regional youth committee and believes more young people who are opposed to government cuts will consider joining Unite once they discover they don’t have to be working to get involved. 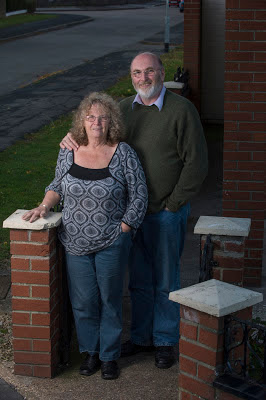 Age itself is no barrier to joining the Unite community membership scheme. In Hull, Joe and Rosalie Kelly were active members of the RMT and NUPE when they were working. After retiring to Spain they returned to Rosalie’s hometown two years ago and they “welcomed” the chance to join Unite.

Their branch is supporting the campaign to defend the local NHS. Three hundred jobs are set to go and ten wards closed in order to save £99 million.  “We fear that, along with the shift in commissioning of NHS services towards GP practices, the heath service is being privatised,” says Rosalie.

The pair want to involve local unemployed young people. Hull has the UK’s highest unemployment rate and the Orchard Park Estate where they live has been badly hit by the recession. This has allowed the English Defence League to flourish and a Facebook page shows the far-right group has 38 supporters on the estate.

“Not all are active, but it’s a worrying sign of what can happen if there are no alternatives presented to the current crisis and the unemployed are left isolated. Unite can help by bringing people together and creating a sense of social solidarity”, says Joe.
Posted by Mark at 06:19