Attending the picket line at the Remploy Wythenshawe print works, Manchester yesterday was a worthwhile experience. All 14 Unite members were out on strike, keen to stand up for their rights in a last-ditch fight to get the government to change its mind on the closure programme. More realistically the hope also was that, at the very least, the redundancy offer would be increased to match that paid to those who left the company two and five years ago.
All 54 Remploy factories are earmarked for closure over the next year to 18 months. A total of 2,800 people, of which around 2,400 are disabled, will be losing their jobs. It doesn’t take a genius to work out that finding another job won’t be easy, and the strikers I spoke to all fear what will happen to them in the future. Most fear never working again. Over the road from where they work is a factory that has now stood empty for six years.
The stated rationale behind the closure programme is typical of this current government. Firstly it pitches one group of (this time) disabled people against another, by suggesting that the money spent subsidising jobs at Remploy should be directed towards supporting other disabled workers seeking jobs and providing funds for employers to recruit them. It wouldn’t, of course, need to be a case of one or the other if they collected the taxes owed by the super rich in tax avoidance schemes. 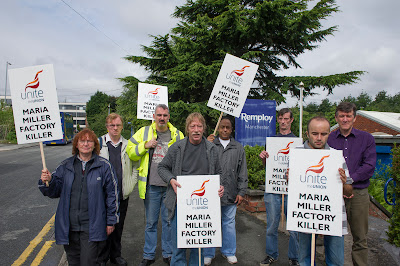 Secondly they try and pretend they are helping the people they are making redundant by putting it around that Remploy segregates disabled people from the able-bodied. I’ve not met on my visits to Remploy factories and picket lines over the last few years any worker who believes that to be true and all want to go on working for the government owned company that was established 68 years ago.
Thirdly its argued that many of the factories have little work, thus deliberately ignoring the fact that this is the result of the wrong management decision, admittedly made under pressure from the previous Labour Government, to downgrade private sector work and look to win public sector contracts under EU legislation. At Wythenshawe they lost orders worth £1 million overnight. Finding new orders might be difficult, but it won’t be as hard as Remploy staff trying to find work.
Some of the staff at Wythenshawe wanted to keep the print works open and make it into a workers co-operative. The Sayce report that has been used to shut down Remploy had offered potential buyers a chance to ‘express an interest.’ They did that at Wythenshawe, but just like no-one wants to listen to disabed people saying they don’t feel segregated working at Remploy, nobody bothered to get back to them with any advice.
Nobody has also bothered to reply to the considered letters of Jean Ashlan, whose disabled son, Omar has proudly worked at Wythenshawe for 15 years. After attending the consultation meetings in September last year she spent days writing to Marie Miller, the disabled minster, Iain Duncan Smith and David Cameron. Only when she complained to her local MP last month about not having heard anything did she finally get back what she describes as “a standard, fobbing off letter that did not answer the main points i made.”
Remploy workers are on strike again next Thursday (26 July). If you get the chance get along to their picket lines and show support. They need it as an Injury to One is an Injury to All. Victory to the Remploy strikers.
And thanks to everyone on the Wythenshawe picket line who made me so welcome.
Posted by Mark at 07:44