Back petition to make landowners responsible for birdlife persecution

Nobody likes to see birds of prey being persecuted. Now, following Scotland’s introduction of a new offence that makes landowners responsible for the actions of their employees, including gamekeepers, the RSPB is backing a petition designed to force the Coalition Government to legislate.

100,000 signatures will automatically trigger a debate in the House of Commons and demonstrate support for a Criminal Vicarious Liability law. This would help ensure those who direct or ignore persecution of birds of prey can be held to account through criminal proceedings.

The Scottish Parliament took action following a number of high profile cases where golden eagle’s had been poisoned. Between 1989 and 2011, the RSPB has calculated that, at least, 50 of these iconic birds have been shot or poisoned. The majority of deaths have occurred in the Central, Northern and Southern Highlands, where driven grouse shooting is far more commercially viable than in other regions of the country.

Over the border, grouse shooting is also driving the hen harrier, one of England’s best-known birds of prey, towards extinction. 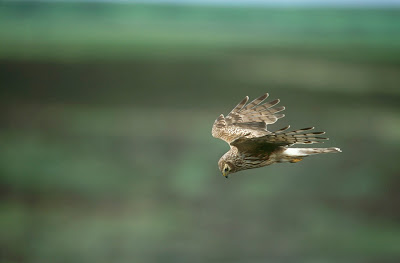 Ornithologists have long enjoyed the sky dancing courtship displays by the male, a beautiful pearly grey with distinctive black wingtips and smaller than the rich brown coloured female with a distinctive white rump.

Yet with less than 10 pairs breeding annually its future remains uncertain, although “we estimate that England’s uplands and moorlands could support 323 pairs” reports Jude Lane, the RSPB’s project officer on the United Utilities’ Forest of Bowland estate near Clitheroe – where the RSPB and United Utilities have collaborated to protect the hen harrier since 1982.

At just 24,000 acres this relatively small area is utilised by United Utilities to control the flow and quality of water into their reservoirs. Upland sheep farmers and those who provide shooting facilities are tenants on the estate. Nevertheless “there were seven nesting attempts in 2011, of which four were successful and 12 birds were reared” explains Jude, who during the nesting season from March to July is assisted by a dedicated team of experienced volunteers keen to ensure the breeding birds remain undisturbed. 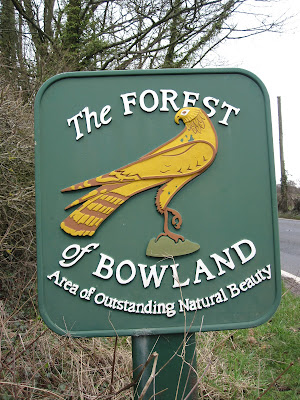 Bowland Forest – the word ‘forest’ being used in its historical sense of a royal hunting ground – is an area of deep valleys and barren gritstone fells. Its peat heather moorland is perfect not only for hen harriers but also the Red Grouse. The latter are specially reared for shooting, traditionally starting on the (in) ‘Glorious Twelfth’ of August. Bags of between eighty and two hundred a day are offered for those who can afford, depending upon the location, between £160 and £1,500.

The Duke of Westminster 19,000 acre Abbeystead estate in the Forest of Bowland still holds the record for a single days shoot, when 2929 grouse were shot on August 12th 1915. Today, the estate organises around 30 shoots annually and visitors are helped get there by the Bowland Forest road signs depicting a hen harrier. Not that they would see any such bird on the Duke’s land, even though the habitat is no different to that found on the nearby United Utilities estate. On Dartmoor and Exmoor in southwest England it’s a similar story, plenty of grouse but only a handful of hen harriers.

Landowners deny killing hen harriers and the British Association for Shooting and Conservation has promised to expel any of its members found guilty of doing so. Proving that has been the case isn’t easy. It was the RSPB’s work that helped establish wildlife crime officers posts and they have long campaigned for more. Yet even those appointed “usually do it part-time, with cases at the edge of their desk” says Bob Elliot, Head of Investigations at the RSPB, which is the largest wildlife conservation charity in Europe with over one million members and 17,600 volunteers.

As such the majority of the reported incidents - totalling 227 in 2010 - of illegal shooting, trapping and nest destruction of birds of prey are the result of initial reports from members of the organisation. Two-thirds originated in England and a quarter in Scotland. The RSPB meanwhile believes the number of unreported incidents is likely to be considerable higher.

Prosecutions are relatively rare. In 2010 there were only 49 individual cases totalling 242
charges, of which 182 were proven. Fourteen people were given prison sentences, of which eleven were suspended ones.

Elliot would like to see prosecutions becoming even rarer but “only if we see people changing their behaviour and practices such that we see rare species re-occupying spaces they should be in.”

Unconvinced that’s going to happen soon he welcomes the new legislation that came into force in Scotland on January 1st this year. He’s aware that it has already forced a review of practices at some shooting locations, with land owners and managers now needing to be able to show they did not know about a wildlife bird crime and took all reasonable steps and due diligence to prevent it. New snaring provisions mean operators must successfully complete a training course and next year all snares will need to be fitted with an ID tag and number.

“The RSPB is neutral on the issue of shooting, but with these beautiful birds continuing to be killed on moors then it is time for the Government in Westminster to follow Scotland and adopt similar legislation. We welcome the petition that has been set up by Chrissie Harper and will be urging our members to support it. I hope Unite agricultural members will do the same” said Elliot, who also reported that a ten year pilot project designed to see if hen harriers can be diverted from feeding on grouse by supplying them with white mice and rats is “going well.”

“Birds of prey such as Peregrine, Red Kite, Goshawk, White-tailed eagle are really stunning species. They are part of our natural heritage, have been around for thousands of years and have just as much right as ourselves to exist” says Jude Lane.