It will be a bittersweet moment this Christmas for John Pearson, the Unite senior rep at Derby-based train manufacturer Bombardier, as he drives out of the gates for the last time.
Grateful for the extra money that will come his way - courtesy of the unions fight for enhanced redundancy payments - the 64 year old hopes to also be buoyed by having helped persuade management to “hang fire, for now” on issuing any compulsory redundancies on the shop floor. But also “very angry as despite the coherent arguments put forward by the trade union movement this uncaring government has failed to abort the decision to give the London Thameslink contract to Siemens of Germany and place it here. Unless they do then the future is bleak for Bombardier, its workers and thousands employed in the local supply chain industries.”
John had his hopes raised when the new Transport Minister Theresa Villiers visited Derby in November. He expected that, at the very least, she would bring news of orders for the 60 trains needed for the Crossrail link across London but “there was nothing except a repeat of previous excuses we had heard. Really we should have walked out. She didn’t even seem to understand that this plant could easily close. They should change their decision now.” 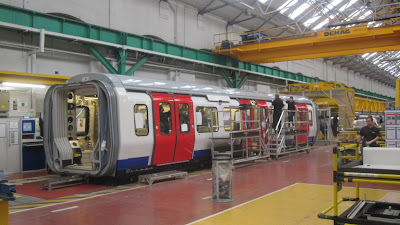 Earlier piece written for UNITE works magazine
Last time, under Thatcher and Major, it was coal, steel, the docks, cars and trucks……And whilst there’s still time to change their mind it’s now, under Cameron, train manufacturing after the Tories, with Liberal support, decided in June to make Siemens of Germany the preferred bidder to build 1,200 carriages for the London Thameslink route. 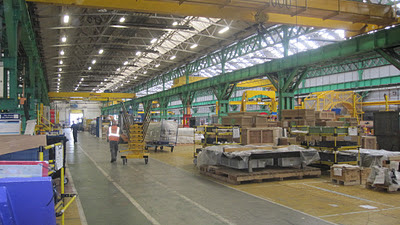 As a result 1,400 jobs at Derby based Bombardier are set to go, the long term future for Britain’s last train making company has been thrown into doubt and the supply chain industries are set to throw thousands on to an already rapidly expanding dole queue.
If the plan really is to switch employment away from the public to the private sector then the government clearly has a funny way of showing it.
Not that John Pearson, Unite senior rep and chairman of the works committee, at the massive Bombardier complex half a mile from Derby Midland station is laughing.
John’s worked there for 27 years and at 64 will be one of those leaving early. He’s grateful for the extra money that will come his way courtesy of all the unions on site fighting for enhanced redundancy payments. BUT, he’s deeply upset and angered that fifteen young people have had their apprenticeships cancelled, that plans to take on a further 100 in the next 8-10 years are on hold and he’s going to be walking out of the gates accompanied by hundreds of others.
The jobs that will be going, which include welders, vehicle builders, fitters, painters and testers, are decently paid. Back in the 90s one rate for all manufacturing staff was agreed with management and that’s currently £430 a week with a shift premium on top. It doesn’t take a genius to work out that once people’s redundancy money is exhausted that local shops and businesses are going to be hit when unemployed workers have a lot less to spend. More will be signing on.
“No-one could believe it when we heard the news.  Government claims that as a nation we’re all in this together ring hollow when they then give away a major contract to a German company that already has a full order book” says Pearson, who as a transport worker at Bombardier moves trailers across departments.
The company is currently building carriages for London Underground until 2014 but other contracts for the Victoria underground line, National Express and London Midland will come to an end shortly. An order of 1,200 carriages would have kept its 3,000 East Midlands employees in work for four years.
John’s aware that Bombardier is one of five companies shortlisted for the contract to supply stock for the Crossrail link under Central London that will require 60 trains 200 metres long. However as this won’t be awarded till late 2013 he fears that the Derby site might not even be functioning by then or in a position to fulfil such a contract due “to the loss of so many skilled workers.” Meanwhile he rejects Siemens claims that 2,000 jobs in the supply chain will be created “because only components are to be made here in Britain.”

John, those he represents and the Derby public, in a town originally built on rail, wanted to know exactly why the Government had sent the Thameslink contract abroad. However the nearest they’ve got to an answer is Transport minister Theresa Villiers stating “the Siemens bid represented best value for taxpayers” and Philip Hammond, the Transport Secretary, defending the decision on grounds that he was restricted by the tendering process set by the previous Labour government and that EU rules had tied his hands to prevent the Tories favouring home based industry.
That’s not the case however in other parts of Europe. In the last five years France has built 100% of its domestic trains at home and Germany 98%, their governments being convinced that they can justify any challenge at the European court of justice on grounds they have taken wider considerations into account such as unemployment.
A survey carried out for Unite by Survation has shown that 40% of companies who supply Bombardier will be cutting jobs as a result of the government’s actions, and not just in Derby and the East Midlands.
“There are 10,000 jobs right across the UK under threat from this decision and that’s why we need to see it reversed” says Diana Holland, Unite Assistant General Secretary.
And to help the Government do so John, other Unite members and colleagues in the RMT, TSSA and GMB have been out vigorously campaigning by taking their case across the UK and into Europe. In August over 10,000 marched through Derby city centre. “It was one of the greatest days of my life” says John. A delegation got a marvellous reception when they went on the pitch before the local team’s match against Birmingham City and the Derby County manager Nigel Clough backed their fight for justice.
Local and national newspapers, and in particular the Daily Mirror, have supported them.
There have also been lobbies at all the major party conferences and the TUC, as well as attendance at the Transport select committee that examined the decision to award the Thameslink contract to Bombardier.
This was presented with written evidence from Unite, which identified ‘the principal cause of the Derby problems as originating from the previous Conservative government decision to privatise the rail network in 1993.’ Following which John Major set up Rolling Stock Operating Companies who lease out the rolling stock to train operators. These companies have made massive profits, but an environment where train manufacturers don’t know when orders, or their size, might be placed has decimated the industry leaving just Bombardier standing in the UK.
“Which is why the union won’t be giving up the fight to get the Government to change its decision” says Diana Holland. Hammond has admitted they could saying he “has the ability to abort and look afresh at the Thameslink project” before its finally signed off.
“He would be doing the country a great favour if he did so. We need a government that is committed to investing in British manufacturing and we feel that if Bombardier loses out it will be another example of this government’s failure to do so. None of which workers can afford” said Holland.
Posted by Mark at 03:34