Review of ENOCH POWELL AND THE MAKING OF POSTCOLONIAL BRITAIN

A shortened version of this is in the current issue of the Big Issue in the North magazine, please
buy a copy when you see a seller.

ENOCH POWELL AND THE MAKING OF POSTCOLONIAL BRITAIN

Enoch Powell was one of the most influential and divisive political figures of the post-war period in which Britain was forced to withdraw from its Empire and become a junior partner to the USA. Best known for his explosive rhetoric against black immigration, Powell was loved by many of his political generation. Camilla Schofield analyses why in this highly informative book. 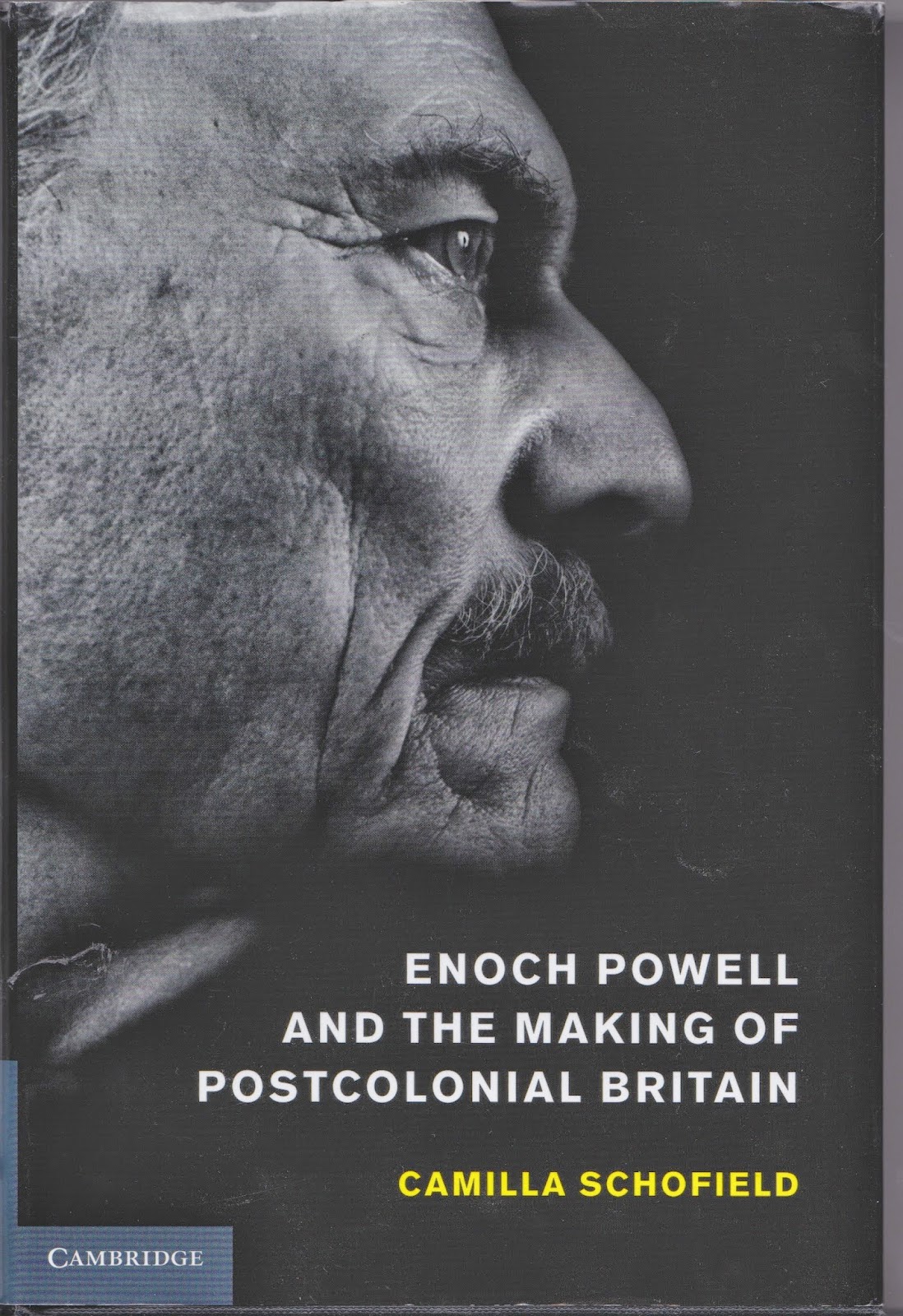 It is ‘biography meets social history’. It tracks Enoch Powell’s political ideas from the 1930s onwards. It seeks to understand Powell’s popular appeal by analysing some of the thousands of letters he received in the years after the ‘rivers of blood’ speech in 1968. The letters are packed with popular racism. But they also reveal working people facing dramatic social and political changes, due to housing shortages, economic uncertainty and imperial decline.

This is key to Powell’s understanding of international relations and his strident US criticism meant he was sometimes accused of being a Soviet spy! He attacked ‘Cold War’ America for simply dividing the world into ‘goodies’ and ‘baddies’. In contrast, he felt the British Empire, at its best, respected the diversity and uniqueness of different peoples. American imperialism was, therefore, far more threatening to national cultures. He read post-war internationalism—like the United Nations and human rights law—as new forms of empire that profoundly threatened national sovereignty and political survival.

3) Why did Powell suggest Britons read the histories written in the two generations before 1880?

He felt an ‘entrepreneurial spirit’ could be found in those years, which had been dampened by postwar economic controls. More importantly, in 1965, amidst talk of British decline, he insisted Britain must put the ‘imperial episode in parenthesis’. Preoccupation with the history of empire just doomed British national culture to a state of decline.

Its immediate cause was the 1968 Race Relations Act, which made it a civil offence for private businesses, like pubs or boarding houses, to refuse to serve individuals because of their ethnic background. At the time, Sikh bus-drivers in Powell’s town of Wolverhampton were demonstrating for the right to wear a turban and beard to work. Powell viewed this as a threatening example of ‘communalism’ that would be strengthened by the Act’s legal protection of minorities.

Additionally, two weeks prior to the speech, Martin Luther King Jr. was assassinated. African-American protest and unrest was at its height at that time. In 1967, Powell had travelled to the US soon after Detroit witnessed one of the deadliest riots in US history. This cast a shadow on Powell’s understanding of race in Britain and contributed to his apocalyptic visions.

5) How was Powell’s supporters’ concept of the welfare state reinforced by a belief in upper class obligation?

Britain remained a class-bound society in 1968. We see among Powell’s supporters a respect for tradition, social deference and—partially—an acceptance of the ‘natural’ rule of the upper classes. Clearly any community’s understanding of government power—or state legitimacy—comes from a vast array of beliefs and traditions. Among Powell’s generation, understandings of the welfare state contained a complex, contradictory mix of beliefs. Welfare services could represent the expansion of social rights and egalitarian principles, but could also be seen as part of a traditional, charitable relationship between social classes.

6) Did Powell’s  ‘enemies within’ speech - in which he attacked ‘organised disorder’ by students and union militants, the liberal media and clergy - assist the Tories to win the 1970 General Election?

Powell thought so—and those who have studied the election have tended to agree. There were major swings to the Conservative party in areas that showed support for Powell’s views. This is when he clearly articulated an anti-liberal populism. Right before Margaret Thatcher’s 1978 statement that Britons feared being ‘swamped’ by newcomers, she had been reading a book that argued that it was Powell who had won the 1970 General Election.

7) How did Powell help make the electorate more receptive to Thatcher’s radical politics?

Powell’s apocalyptic visions of racial violence profoundly contributed to fears of revolution in the 1970s and to the notion that Britain’s very existence as a nation was  threatened. According to Powell, the liberal ‘enemies’ of the nation were everywhere—on television, in the Church, in the unions, and even within the Home Office. These liberal enemies had, among other things, failed to protect working people from the ‘unarmed invasion’ of black immigration. Like Powell, Thatcher adopted the argument that the liberal establishment had grown too powerful and could not be trusted. With all this, Powell offered a holistic way of seeing the unrest and economic uncertainty of the 1970s—and called for radical political solutions.