Peace process has not ended 52-year conflict
Government ‘denying’ killings are political
A British organisation that played a key role in Colombia’s peace process has urged the Bogota government to do more to protect community activists threatened by right-wing paramilitaries.
An agreement between the Colombian government and the Revolutionary Armed Forces of Colombia (FARC) guerrillas concluded in Cuba last year and brought to an end a con ict that stretched back to the 1960s and left 200,000 people dead.
‘Worrying developments’
Justice for Colombia (JFC), established by British trade unions 15 years ago, used its experience of campaigning for peace in Northern Ireland to play an important role in negotiations, organising delegations of unionists and nationalists who participated in the 1998 Good Friday Agreement.
But more than 100 community and human rights activists were murdered last year by right-wing paramilitaries since the peace agreement was concluded, and 42 more have been killed this year. The paramilitaries are seeking control of areas once held by FARC.
“These are extremely worrying developments,” said Hasan Dodwell of JFC. “There is an intensification of violence by paramilitary groups, which are reported to be moving into rural communities where they have previously had no presence.
“The Colombian government is denying the political nature of the killings. This casts doubt on their willingness under the peace agreement to protect community activists by tackling the paramilitaries.
“This is a grave situation. Protection has to be ensured by the Colombian government for all those who are politically active.”
A JFC delegation was the first international group to meet FARC’s negotiating team at the start of the six-year peace process that last year was derailed when a referendum failed to ratify it. It was ratified in December following revisions.
One of the delegates, Brian Campfield, president of the Irish Congress of Trade Unions, said: “The peace message we took to Cuba was a powerful one as the delegates included previously bitter opponents and demonstrated that conflicts that were considered intractable had real potential for being resolved with the right conditions and political leadership.
“The peace agreement was a major achievement. But rati cation doesn’t end matters. FARC has disarmed and the communities in their areas of in uence are vulnerable to murderous activity by right-wing paramilitary groupings.
“The government must ensure that demobilised insurgents are safe as well as trade union, human rights and land rights activists. The murders of community activists highlights much more needs to be done.”
The British government has condemned the killings. The Colombian government did not respond to Big Issue North’s requests for comment.

An invitation to Blackburn residents to help with plans to commemorate famous events in the town in 1842.

An invitation to Blackburn residents to help with plans
to commemorate famous events in the town in 1842.

An invitation is extended to anyone who would like to help with plans to mark the 175th anniversary of Blackburn’s part in the first General Strike.

In August 1842, what began as a strike movement in Lancashire, Staffordshire and West Riding of united resistance to the imposition of massive wage cuts among workers in the coal, cotton and engineering industries immediately took on a political character to become an all-out struggle for universal suffrage.

In Blackburn on 15 August 1842, thousands walked out of the mills to meet crowds converging on the town from right across Lancashire.

After the Riot Act was read the Army opened fire and, at least, four women were killed and many others seriously injured. The five men who organised the strike in Blackburn were later sent to Tasmania and never returned.

In August 1993 a plaque that commemorated this bloody chapter in Blackburn’s history was unveiled at BBC Radio Lancashire’s headquarters in Darwen Street. It is still there 24 years later.

On of those involved in 1993 was councillor Tony Humphrys and he subsequently went on to conduct further research into the events in 1842 and even discovered the names of four women who were killed on 15 August 1842. These names and other information remain unpublished but it is proposed to end some of the mysteries on 15 August this year.

A meeting to help plan events on 15 August is to be held at 6pm at the Blackburn Museum. It will be chaired by councillor Tony Humphrys. Also in attendance will be Mark Metcalf, who is employed by Unite the union on the Rebel Road project (*) that publicly commemorates labour movement heroes and events that are publicly commemorated in the form of plaques, statues and buildings named after them. 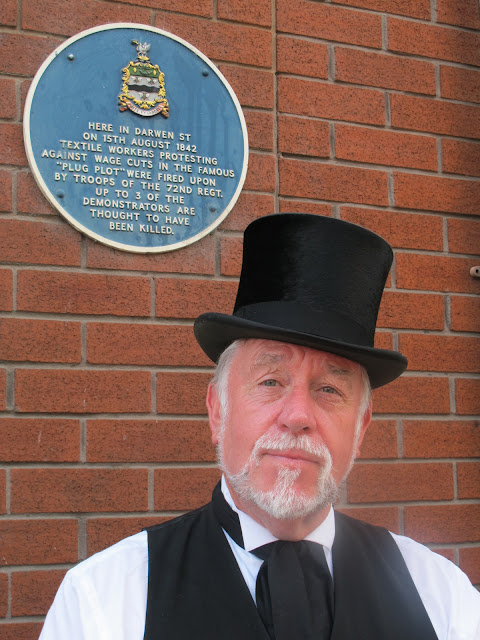