500 people marched through Leeds on Saturday 5 April to show their opposition to the divisive bedroom tax. The event was organised by Leeds Hands Off Our Homes and sponsored by Unite, many of whose local Community members turned out on the day. Marchers enjoyed a warm reception from the watching shoppers as they passed through the city centre.

Around 9,000 households in Leeds have been hit hard by the bedroom tax, which has reduced housing benefit by between 14 per cent and 25 per cent for those in social housing if they are deemed to be ‘under occupying’. Whilst some people have been successful in obtaining discretionary housing payments from Leeds City Council these payments are temporary and new applications need making each year.

Research by the National Housing Federation (NHF) has found that two thirds of households affected by the bedroom tax cannot find the money to pay their rents. 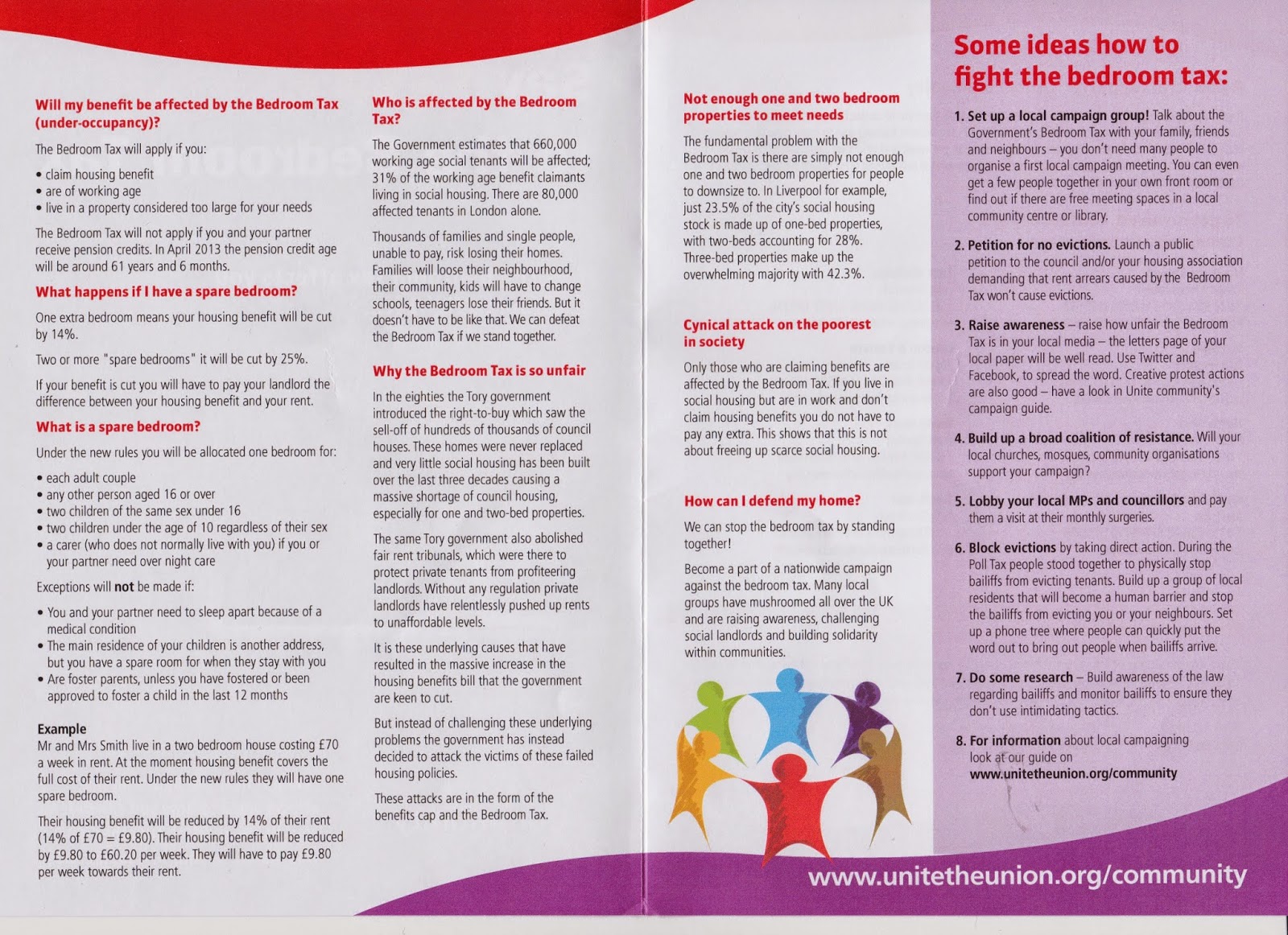 Meantime, the Scottish Federation of Housing Associations has questioned the coalition government claims that the tax is saving the Chancellor money. It believes the reforms are pushing up costs for social landlords because of the resulting rent arrears and the extra expense involved in assisting tenants. It believes this will push up rents, increase the housing benefit bill and result in the government realising very little savings.

The NHF also believes that by forcing people out of social housing and into smaller properties in the private sector, where rents are higher, this will increase the overall housing benefit bill whilst resulting in more people having insecure tenancies.

The government has claimed that people who cannot afford to pay the tax should seek smaller accommodation but in many areas of the country this is simply impossible as there is not the housing stock to ‘allow’ people to downsize. ‘Only’ around 6% of social tenants affected by the bedroom tax have moved.

Leeds tenant and Unite community member, Carol O’Keefe has been looking to find a smaller property for almost 14 months. After an eight-month period as a homeless person she was “delighted” to be given a 2-bedroomed high rise flat by Leeds City Council in January 2012. With help from family and friends she was able to furnish the property only to be left shocked when she received a leaflet through the door informing her she was going to be liable for the bedroom tax, which in her case was to be £9 a week

She fought a long battle that ultimately helped her obtain a discretionary payment to cover the £9 but this ended at the end of March 2014. She is now back to fighting to obtain the same relief in 2014-15. Carol was unable to pay her full rent whilst she fought to obtain a discretionary payment and she admits this impacted on her “mental welfare”. She is in contact with many people who did not obtain any support and they have told her how they have cut back on food and heating their properties. “I help organise a food bank and the numbers requiring help has jumped considerably,” says Carol.

The Labour Party leader Ed Miliband has said: “If we win the next election, I will scrap the bedroom tax.” However, in the meantime, councils, including Leeds, which are controlled by Labour, are administering the tax.

Susan, a Unite community member who was one of the organisers of the demonstration, said: “Ed Miliband’s promise might be too late for many people in the city. We feel that as in other locations Leeds City Council could find ways of blocking the legislation rather than relying on the money they get from the government for discretionary housing payments”.

In Scotland, Unite was at the forefront of the successful campaign that saw the Scottish Government forced to agree to pay the full funds needed to cover the Con-Dem cut. Appeals against room size, over occupancy and room usage had made the bedroom tax almost unworkable before the Scottish Government stepped in to clear up the mess.

“We are marching to remind people that the tax is unjust and needs scrapping. I think our fight has been aided considerably by having Unite on our side. The unemployed, the unwaged and disabled people need the backing of a union. You can’t do things on your own, collective organisation is the only way to win and I am proud to be a Unite community member who is fighting for a better future for everyone” said Carol.