RIP: Harry Gregg, a great man in my view

Harry Gregg’s death has let me feeling quite sad as he was a man who was always happy to be contacted for comment when I was writing an article about events to which he was connected. I was also delighted to meet him on 6 September 2018 when he made the long trip by car from Northern Ireland to Blackpool to unveil the Professional Footballers Association (PFA) plaque to goalkeeping great Frank Swift, who was tragically killed on 6 February 1958 in the Munich tragedy at which Harry was a hero who went back into the burning plane to rescue a number of passengers.

I had asked Harry to do the unveiling as when I wrote a biography of Frank Swift he had been happy to be interviewed over the phone. By the time of his death, Frank was a journalist with the News of the World. He had criticised Harry, just recently arrived at Old Trafford for a world record fee of £23,500 from Doncaster Rovers, for spending too much time on his goalline. Frank had also criticised Harry’s failure to save the final goal in the Manchester United match against Red Star Belgrade that ended 3-3 on the day before Munich.

None of which mattered when Big Frank, possibly England’s greatest ever keeper, a giant of a man both on and off the field, was later laid to rest. Harry was there and he told me “when I say Frank was a wonderful character it is not because he always wrote nice things about me. It is easy to be a character and not have the ability, but Big Swiftie had ability and character. Put these two things together, what more could you want.” Harry could, of course, easily have been describing himself!

After the funeral, Harry later made a trip out of respect to Frank to purchase a pair of goalkeeping gloves that the former Manchester City keeper had recommended. Sixty years later he made the trip to Blackpool to further honour Frank by unveiling a plaque on Revoe library that is close to where Frank Swift was born. Harry spoke with great passion with his strong accent often causing some confusion amongst the watching audience amongst which were a group of half a dozen Leeds fans.

Prior to the ceremony at the library there had been a series of mural unveilings to Frank Swift and Jimmy Armfield at the Revoe Primary School they both attended at one time. The Armfield family unveiled a plaque to Jimmy. 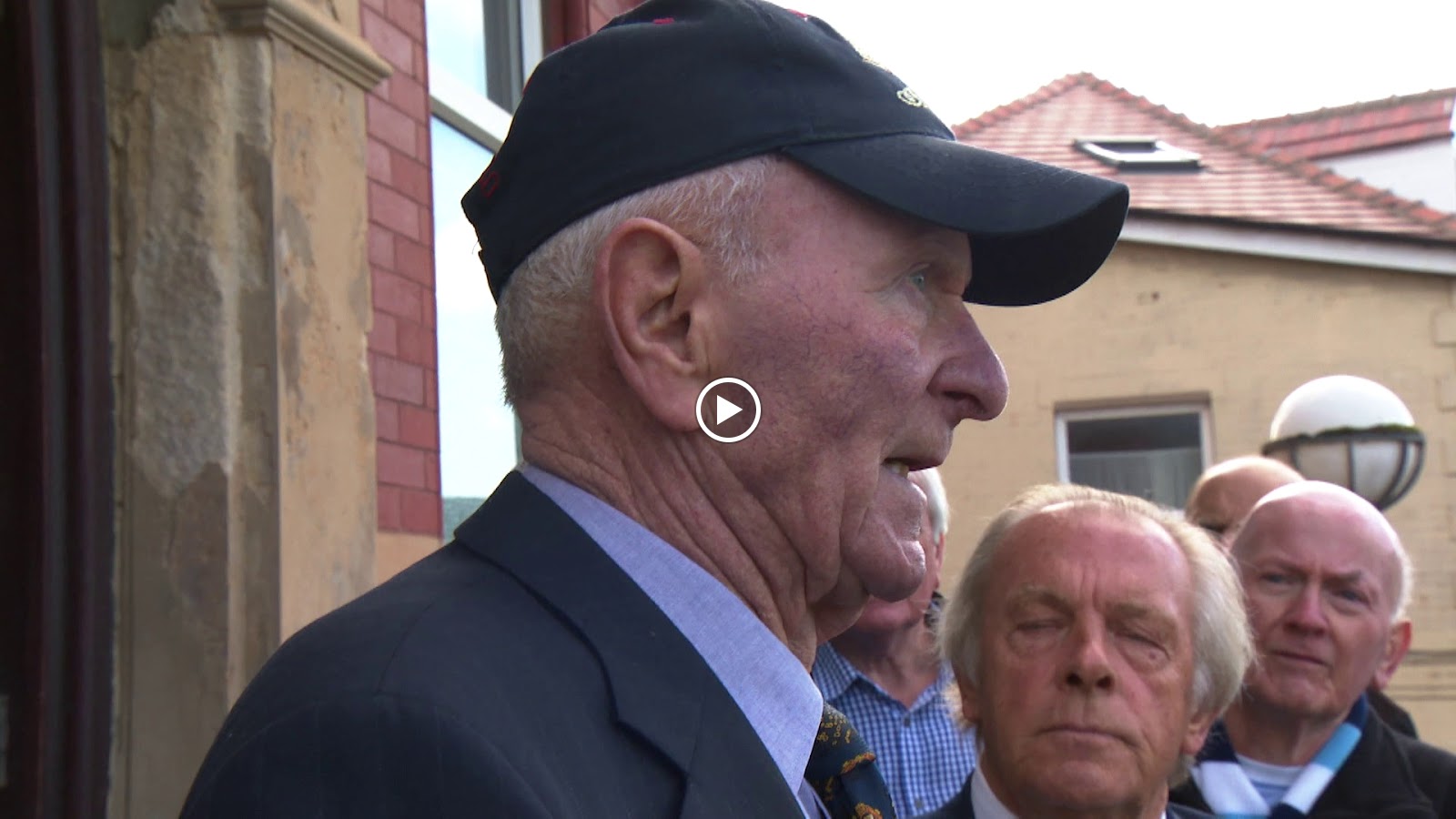 Before this part of the day started I was slightly thrown when one of the Leeds fans said who his group supported. Generally there is not a lot of love lost between Manchester and Leeds United. On enquiring why they were there I was told a few of them had met Harry on holiday a while back and he had totally enthralled them. They were big fans of Harry. The PFA had published some beautiful posters for the events in Blackpool on 6 September and these lads, and other fans, quickly took one or two to get them autographed. Frank was interviewed by Simon Mullock of the Sunday Mirror and the pair got on very well.

I had many years previously benefitted from Harry’s willingness to talk about his United appearances against Liverpool for a book I co-wrote on the history of matches between these two great Lancashire rivals. One game stood out; Manchester United 0 Liverpool 1 in November 1963. Harry had had his collar bone broken and in an era when there were no substitutes he pulled on a top and went back out to play centre forward. “I later got the biggest rollicking of my career.” He had defied the pleading of the orthopaedic surgeon Mr Glass and was afterwards told his collar bone could have pierced his neck or lung. He described how the on-field animosities in these games counted for nothing off it. He also described to me how goalkeeping was different in his days with much fewer punches and a general willingness to dive at the attacking forwards’ feet in an attempt to gather the ball. Today ‘keepers try to spread themselves in a star shape.

Harry also told me about his own battles to have his autobiography published and he, naturally, recommended I bought it. It was sound advice as for years I have told football fans that Harry’s Game: an autobiography is one of the best football books you’ll ever read. RIP Harry Gregg. 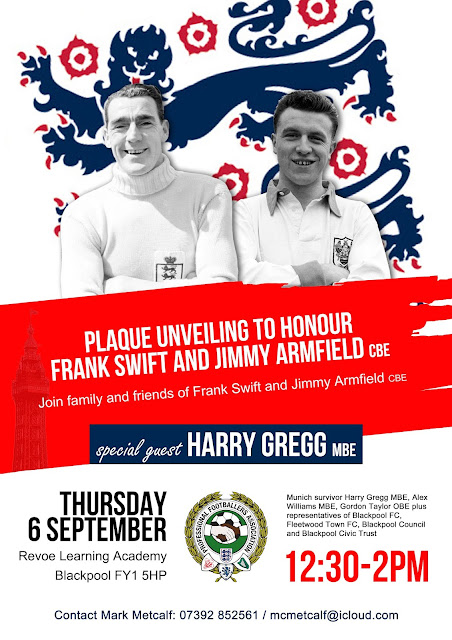 Will Yorkshire Water finally flush away the grouse shooters?

This was an article written late last year for the Landworker magazine and which was not published due to a lack of space. Hopefully a follow piece can be sorted out in 2020.

All photographs are copyright Mark Harvey of ID Photography, Sheffield. Many thanks to Mark for allowing me to use them.

Yorkshire Water (YW), the biggest landowner in Yorkshire, faces pressure from local environmental and wildlife campaigners to stop leasing land for grouse shooting. Eleven parcels of land are  leased for the paltry annual sum of £70,000. If YW acts they will follow two large local landowners that have recently thrown grouse shooters off their land.

Grouse shooting is a barbaric activity where wealthy individuals defenceless birds. The practice facilitates wildlife destruction. And when wet, peaty blanket bog is burnt to create ideal conditions for grouse breeding then the water supply is polluted. There is also environmental degradation due to carbon loss plus increased chances of flooding downstream. Many Yorkshire close to grouse shooting estates have experienced severe flooding in recent times.

Established five years ago, Ban Bloodsports on Yorkshire’s Moors is a voluntary group that believes the ‘moors are the jewel in our region’s crown and must be preserved in a way beneficial to wildlife, education, its users and the local economy.’

Spokesperson Luke Steele from Leeds has been active in the group from the start. “I grew up walking the local moors. I am sick of seeing the wildlife persecuted, the environment damaged and local communities suffering flooding and air pollution. Plus why should YW customers subsidise grouse shooters who by burning the moors are releasing pollutants that end up in the water supply and need removing at a considerable cost to make the water clean to drink. The costs must dwarf the £70,000 YW receive in return.”

Visiting Haworth Moor, where a gamekeeper has been interviewed for animal cruelty after he was caught on camera tending to deadly traps where a young rabbit was discovered killed, it was apparent that much of its moorland had been burnt as the ground is black. Smoke plumes were frequently seen by local residents earlier this year.

The leaseholders of YW’s land on Haworth Moor are the Walshaw Moor Estate (WME), who have not signed the voluntary agreements that former environment secretary Michael Gove was encouraging landowners to sign last year to promise not to burn the moors.

WME, which is under EU investigation for damaging protected habitats on sites of special scientific investigation, belongs to wealthy retail owner Richard Bannister.

In 2012 Bannister obtained £2.5 million of public money towards his estate where he charges a lot for a days shooting. “Depending on the shoot it can cost between two to ten thousand pounds per gun a day. City bankers and aristocrats use the moors as a playground, get sick pleasure from killing the grouse. They put nothing back into the local economy,” explains Steele.

In fact, grouse shooting can cost some local communities. Research by Leeds University on the effects of moorland burning on ten Pennine Moors revealed it lowers the water table. Where burning takes place there are higher peak flows during heavy rain. Situated in the Upper Calder Valley and downstream of the WME, both Hebden Bridge and Mytholmroyd have suffered heavy flooding in recent years. Businesses were destroyed and jobs lost. Millions are being spent to bolster local flood defences.

Also not safe when it comes to grouse shooting are wildlife. On a wooded area on Haworth Moor it was easy to find many snares including one containing a dead fox. Branches had been purposely rigged up to funnel animals into an area where food had been laid out close to snares.

As we left the wood, which we had a legal right to access, we met one of the gamekeepers who was on quad bike at the front of which was his loaded shotgun. He was highly aggressive and sought to intimidate us. We were fine but “imagine if that was a local person out with their dog, I suspect they would have found that very unpleasant,” said Luke who explained that gamekeepers are under pressure to break the law by persecuting badgers and birds of prey, many of which mysteriously go missing when they take up breeding close to grouse shooting areas.

Natural predators of grouse such as stoats, weasels and foxes are regarded as threats to the grouse shooting businesses and so must be eradicated even if it means mounting snares, legal or not.  “Gamekeepers like to set the moors up like a fortress and want to prevent any wildlife getting on to them,” explained Steele.

According to Luke, many YW customers have sent postcards from his group asking the company to stop leasing its land for grouse shooting. He believes the company is being forced to take the issue very seriously and he reports, “YW staff, including many Unite members, have told us they are asking management to end the contracts. John Grogan, Labour MP for Keighley and Ilkley, has also written asking YW to act decisively. Bradford Borough Council and NG Bailey have recently terminated leasing contracts for grouse shooting on Ilkley Moor and Denton Moor respectively. We hope to see YW follow suit soon.”

The Labour Party nationally has called for a review into driven grouse shooting with its environment spokeswoman Sue Hayman saying, “the costs of grouse shooting on our environment and wildlife needs to be properly weighed up against the benefit of land owners profiting from shooting parties. There are viable alternatives such as simulated shooting and wildlife tourism.”

Sheffield Hallam CLP, Unite Community and Sheffield TUC have established an annual moorland walk to protest against the start of the grouse shooting season on August 12 on local moorland. Spokesperson Robert Howarth said, “we seek a ban on grouse shooting and the redirection of ineffective agricultural and land subsidies into a land fund which would help local authorities and other public bodies to become owners of our open spaces, encouraging re-wilding and a more diverse agriculture and husbandry. Young people could be encouraged into arable farming and husbandry.”