Why don’t we just... do more to save northern farmers? CHARLIE CLUTTERBUCK AND MARK METCALF

Leaving the EU will mean one of the biggest changes in food and farming in the last 200 years, since the Tories repealed the Corn Laws in the 1840s and Labour introduced the Agricultural Act following the Second World War.
The EU’s Common Agricultural Policy of subsidies to landowners, mainly the big ones – some of whom did not even grow food – was rightly criticised and hugely wasteful but it did at least afford smaller British farmers a degree of support. Now everything is set to change dramatically.
Prior to the referendum, farmers were reassured that something similar to the EU subsidies would continue but immediately after the result, ministers backtracked by saying they could not promise anything. Protests by farmers led to promises to keep subsidies until 2020 and later to 2022. Yet doubts remain and Minette Batters, president of the National Farmers Union, has warned: “The government must not sacrifice British farming on the altar of free trade.”
We believe Batters will be disappointed as Brexit will change how much we pay for our food, who works the soil, what we eat, how our land is used and where we get our food from. It is in the rural areas round our towns where the greatest changes from the Brexit breeze may well blow in.
A new report by consultants Strutt and Parker says net profit for the average English farmer will fall by half over the next 10 years, even if environmental payments grow.
Most farms in the north are smaller family farms – and on the wrong side of average. They are most likely to be hit by subsidy changes. Most small sheep farmers, who in the past were ignored by all political parties over the scandal of sheep dip stuffed with organophosphates, earn around £20,000-£25,000. Probably £17,000 of that comes from present EU subsidies.
If it’s not the end of subsidies, it is the tariffs that will kill them off over the next few years. The largest lamb export market – taking 90 per cent of our exports – is the EU. It will maintain the 40 per cent tariffs that protected our farmers, prohibitively putting up the price of our exports to the EU.
And if it’s not the tariffs, it’s the quotas. New Zealand and Australia are given quotas that allow lamb into the EU before any tariffs kick in. Those figures must now be split between the EU 27 and the UK. The EU and UK thought they had cooked a deal on that division but Australia is challenging it at the World Trade Organisation. And good old WTO rules mean that another 14 countries, including Russia, are backing Australia there.
Who therefore is going to stand up to the government’s plans for the countryside? The Conservatives have always dominated matters in rural areas, favouring landowners and larger farmers. The opposition to these attacks is weaker than ever, with barely any rural seats held by MPs other than Tories.
Smaller farmers, many of whom are tenants rather than landowners, won’t go to food banks. They’d rather eat grass than resort to charitable handouts.
For workers the prospects are even more bleak. England is the only country in the UK not covered by an agricultural wages board and already we have received reports of morning and afternoon breaks being cut, fines for lateness and holidays reduced.

Staff from Eastern Europe face being badly exploited due to their lack of English.
As we wait for the lambs to start springing, massive decisions are being made miles away that will affect generations round here.
There is not much sheep farmers in the north can do if they are forced out of business. Already there are reports of livestock farmers selling stock early but finding prices are falling as others clock the risks, so they are not investing in stock and machinery.
They will be urged to diversify but the only real option – unlike in other currently underused lowland locations that could be used to grow food – is to plant trees. There will be climate change inducements to do so, especially with a handout, and cheering from the wings. But the economies round our many northern towns will be hit badly.
It is not just the farmers who will be affected but many contractors, mechanics, butchers, bars, restaurants and abattoirs. Killing and cutting up lamb helps our local economies. Timber won’t provide anywhere near as much work. Certainly, money does not grow on trees!


Charlie Clutterbuck and Mark Metcalf worked on the 2017 book Bittersweet Brexit: The Future of Food, Farming and Labour, which argued for swapping CAP subsidies away from land and into labour. 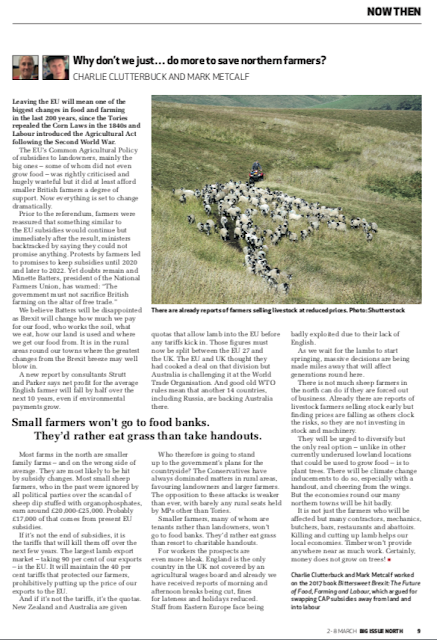