FEAR FOR SCHOOL’S FUTURE
Published January 2019 in Big Issue North magazine
Future looks bleak for Whitehaven Academy
Closure would mean pupils bussed miles
The multi-academy trust that has replaced the disgraced Bright Tribe in running Whitehaven Academy is being urged to make rapid improvements to ensure pupils leave with a good education and that the school has a long-term future.
Academies are state schools directly accountable to the Department for Education (DfE), rather than local authorities. Teaching unions contend that this has led to a lack of financial transparency within the education sector.
Panorama investigation
Bright Tribe, which took over at Whitehaven in 2014, is being investigated by the Education and Skills Funding Agency over allegations, recently aired on a BBC Panorama programme, that
it received public money for building work, lighting and fire safety improvements at Whitehaven and its Colchester school that were never started or not finished.
Two-thirds of the dilapidated Whitehaven site was closed by 2017. In April 2018 part of the school was closed following the discovery of asbestos, prompting local MP Trudy Harrison to call
for it to be demolished and rebuilt.
Julie Rayson, founder of Whitehaven Academy Action Group (WAAG), said most local people would have welcomed the chance to explore all options, including returning the school to local authority control, when Bright Tribe was forced aside. But in December last year, the school instead became part of the Cumbria Multi-Academy Education Trust (CET) of seven schools.
Rayson, an independent councillor and former pupil at the school, said she was concerned about the future of the school.
“CET, which is only three years old, has said they will be different to BT. Yet the head, Mr Turner, left in mysterious circumstances just as CET assumed control. Consultation with parents appears to have consisted of a letter going out informing who was taking over.
“The young people are brilliant and are very resilient but these are the most important years of their lives. They have already been badly let down. That mustn’t be allowed to continue. Six months is enough time to make improvements.”
Ignoring the views of parents and a lack of accountability have created many critics of the academy system, which began under the Labour government in 2000 and expanded massively since the Conservatives entered government in 2010.
Head left unexpectedly
Rayson formed WAAG in 2016, her son leaving the school after completing his GCSEs a year later.
“We raised funds for the little extras,” she said. “We became concerned that public money for school repairs was not being spent.
“Our fears were heightened when Mr Grant, a really popular headteacher, left in July 2016. No one from the trust could provide an explanation.”
A month later Bright Tribe disbanded the school’s governing body, on which two long-serving parents sat.
“WAAG made multiple Freedom of Information requests as we knew things were not right,” said Rayson. “I began attending and raising concerns at town council meetings. When a vacancy arose in my own ward of Hillcrest I stood and was elected unopposed.”
Rayson has used her position on the council to raise her fears that Whitehaven children are being badly let down.
WAAG began demanding that the DfE account for its backing for Bright Tribe, a 16 school multi-academy trust that included Oldham’s Werneth Primary and Haltwhistle First and Middle Schools.
WAAG and Harrison successfully urged the DfE to drop Bright Tribe. All of these schools are now being transferred – re-brokering is the official term – to new sponsors, none of which will be local authority controlled. This is despite an overwhelming vote at a packed Whitehaven public meeting in November last year for Cumbria County Council to take control of Whitehaven Academy.
Tony Gavin, a former Yorkshire secondary school head teacher, said re-brokering Whitehaven Academy was the wrong move.
“Academies get away with poor practices because of a lack of democratic oversight,” he said. “[Oversight can be maintained] if a school is run by the local authority so that parents can approach their elected councillors if they have serious concerns.”
From personal experience, Gavin is concerned that academies do not have to employ qualified teachers and are excluding children who they do not believe will pass their exams.
Whitehaven Academy pupil numbers have collapsed from around 1,000 a few years back to about half that figure. Gavin, aware that the only other academy in Whitehaven is oversubscribed, fears this might make the school financially untenable.
“Closure would mean pupils being bussed many miles to other schools,” he said. ”Whitehaven is a former industrial town that has been left to go to ruin. A good education is something every parent wants for their children, all of whom need a chance to gain skills to find work that will allow them to have a good life.
Big Issue North sent a series of questions to the DfE. In response a spokesperson said: “CET has worked in consultation with parents and is committed to parental engagements and is currently assessing applications from parents to be part of the local governing body.


“CET has the experience to make the much needed improvements. We will be working closely with the trust to ensure this happens.” 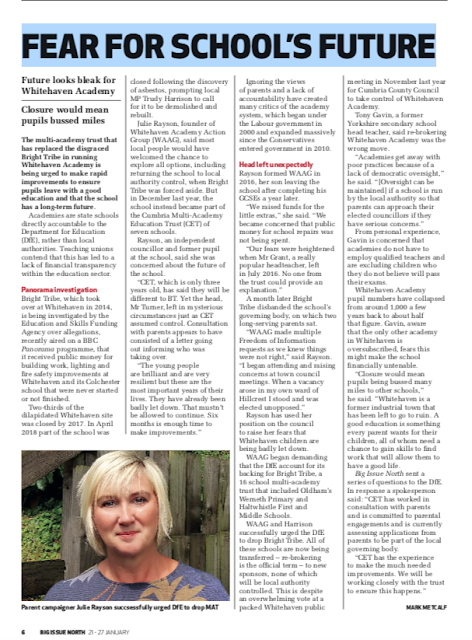