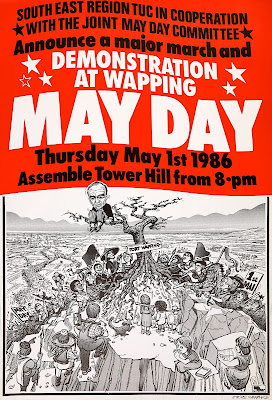 Bad News - the Wapping Dispute
John Lang and Graham Dodkins
Illustrations - the late Tony Hall of Strike Graphics
£15.000
Spokesman Books
As he also had the Tory Government, police and the whole state apparatus supporting him then standing up to one of the world’s most powerful men wasn’t easy. It’s therefore pleasing to read a book about the thousands of print workers who in the mid 1980s resisted Rupert Murdoch’s attacks on their jobs, wages, working conditions and trade union bargaining rights.
The miners’ strike of 1984-85 was still fresh in people’s minds when Murdoch moved against his London Fleet Street employees at the Times, Sunday Times, News of the World and the Sun. His motivation was simple - to maximise his profits.
The man who loved Maggie [Thatcher] prepared the ground well. Hiding exactly why he had purchased a new building at Wapping.
Then installing and testing, with the assistance of - to their eternal shame the Electrical, Electronic, Telecommunications and Plumbing Union - new machinery to ensure he could keep publishing when his employees were left with no alternative except to take strike action to defend themselves.
Within minutes of doing so, on January 24th 1986, Murdoch had sacked all 5,500 of them including the Bad News authors. John Lang and Graham Dodkins were amongst 600 clerical workers dismissed, half of whom were women. The pair, using interviews they conducted during the industrial dispute that raged for the following 13 months, have done an excellent job in bringing to life the courage and dogged determination of those who fought for their jobs and trade union rights.
Doing so meant putting a picket on the Wapping plant. The hope was that those inside would join them once they’d heard how their actions were damaging fellow workers and their families. No one thought it was going to be easy. But what most hadn’t considered was just how hard the Metropolitan Police, with Thatcher’s full support, would make it and the book recalls how many print workers and their supporter’s were harassed, attacked and criminalised.
As Tony Benn writes in the foreword “I saw the police in action in a way that was violent and unjustified.”
The courts too were used against the strikers when their union, SOGAT [1], had its assets sequestrated. Funds for strike pay and campaigning activities were lost. Disturbingly too, in an industry where trade unionists at rival newspapers had historically shown solid support for one another this time there proved little appetite for a fight. Striker’s attempts to get their union to organise solidarity action failed. Meanwhile millions continued to buy Murdoch’s papers, a fact that often produced dismay when strikers’ saw someone reading a copy of the Sun.
At times it seemed that everything was against them, but the formation of dozens of support groups across Britain, thousands of invitations to speak at trade union meetings, huge collections and massive rallies that frequently hampered operations at Wapping showed that as long as the print workers’ battled on then there would be plenty to give them their unqualified support. 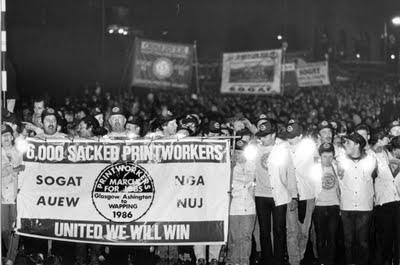 In the end it wasn’t enough. Redundancy money did little to cushion the blow, trade unions were wiped out at Wapping - even the EETPU’s scabbing didn’t get them a recognition agreement - and plenty hardly worked again. One local young lad was crushed to death under the wheels of a TNT lorry racing to deliver papers. No one was ever charged.
This then is no story with a happy ending. Yet even at the end the majority of striking clerical workers  couldn’t support a vote to call off the dispute with vast numbers abstaining. [2] And whilst no one liked losing there wasn’t anyone who regretted fighting for what should be everyone’s right - namely a decent paid job in a workplace where workers can join and be represented by a trade union.
“This is a book that should be very widely read as it is relevant to those in current struggle.” Tony Benn.
[1] SOGAT is now part of the Graphical, Paper and Media industrial sector inside UNITE.

[2] When members of the TNL/NGN clerical chapels met on February 9th 1987 the vote to 'consider the dispute at an end' was accepted by 30 to 3 with an estimated two to three hundred abstaining.
Posted by Mark at 12:50