While Scottish animal welfare campaigners are stepping up their efforts to block loopholes in fox hunting legislation their English and Welsh colleagues are reaching out to help farmers, landowners and rural residents being badly affected by hunt trespasses.

Foxhunting with dogs was outlawed by Scotland’s parliament in 2002. Hundreds of hours of parliamentary debate took place before England and Wales followed suit in 2005 when the Labour government was forced to use the Parliament Act after Tory peers in the Lords repeatedly rejected the legislation.

In 2006, legal attempts by hunters to reverse the ban on grounds that it breached human rights were dismissed by the High Court. Hunters also predicted that the law would be unenforceable and threatened defiance.

There were few early prosecutions but the figures have steadily increased each year.

Nevertheless, animal welfare campaigners have assembled overwhelming evidence that hunts are exploiting legal loopholes to still hunt in a manner which is very similar to pre- ban traditional hunting. A person will be deemed to be hunting by participating in the pursuit of a wild mammal where one or more dogs are employed in that pursuit.

Hunts across the UK can though exploit an exemption called “flushing to guns” that means letting hounds chase foxes out from cover such as woods into the open, to be shot by a marksman.

The League Against Cruel Sports (LACs) monitors hunts. According to its Scottish Field Investigator “we have filmed hounds running across open countryside in pursuit of foxes, hunts entering their dogs into cover when there is clearly no intention to shoot any foxes that may be flushed...”

The Investigator said fox hunters were organising on a need to know basis, making it difficult to collect evidence that can stand up in court. LACs field research officers have been on the sharp end of considerable harassment and intimidation by those who engaging in a cruel and unnecessary practice that has little effect on reducing fox numbers.

LACs and other Scottish animal welfare activists have organised a high profile campaign to strengthen the law. After a lengthy process led by Lord Bonomy the SNP government promised a Bill to outline steps to close loopholes in the 2002 legislation.

Time limits for prosecutions were to be extended, a code of practice introduced and independent hunt monitors were to be considered.

The SNP has now failed to keep its pledge by dropping the bill from its 2020 programme for government. A letter has since emerged from the SNP rural economy secretary Fergus Ewing to a hunt sympathiser. Ewing backs “current exemptions which have enabled pest control to be carried out using dogs.” He states there was “no intention to ban that activity.”

LACs Scottish director, Robbie Marsland has expressed his “deep disappointment” at the SNP’s inaction. LACs will now support a fox and hare bill by the Scottish Green MSP Alison Johnstone “to close loopholes in the current legislation and really ban hunting in Scotland.”

In England and Wales the voluntary group Hounds Off (HO), established in 2010 after the then Conservative opposition leader David Cameron had promised if elected to repeal the Hunting Act, seeks to create hunt-free zones.

Cameron was unable to repeal the Act, which according to HO founder Joe Hashman, “HO seeks to complement by getting farmers, landowners and rural residents to declare their homesteads as hunt free zones. We want to unite a compassionate uprising in support of the Hunting Act and against killing for sport.

‘We have built a nationwide network, including livestock farmers, tenants and estate managers, of people who are shocked and infuriated by the arrogance and lawfulness of hunts and their followers...who are fed up with disruption caused by dogs and hunters going wherever they like as it they own the place – which often they don’t.”

The advice provided by HO has been drawn up by legal professionals. It includes getting to know your property rights, warning off the local hunt and erecting no hunting signs. The group, which also backs the work of organisations such as LACs, has helped many people prevent attacks on their animals, the killing of foxes on their land and general harassment by hunters.

JC, who lives in Kent, praised the “wonderful support and advice of Hounds Off. We repeatedly suffer from the arrogant and bullying behaviour of our local hunt. We plan to use all available means to put an end to this harassment.”

Whilst Hashman, who hopes a future Labour Government would strengthen the law on fox hunting, is “buoyed by these successes” he also wants to develop new forms of hunting that do not involve killing wild animals. He cites drag hunting and Dry Booting that involves using “a small pack of bloodhounds to hunt human runners by their scent along...... which if developed could create a whole gamut of rural recreational possibilities and business opportunities.”

Hounds Off has no regular income and so the group seeks to raise its profile message via social media and word of mouth. Hashman, who is a regular annual visitor to the Toldpuddle Martyrs Festival, would welcome trade union support. He is especially keen to see trade unionists in the railway sector speak out as “hunt trespass is a common occurrence and it’s a danger to railway workers and passengers. It needs to be stopped.” 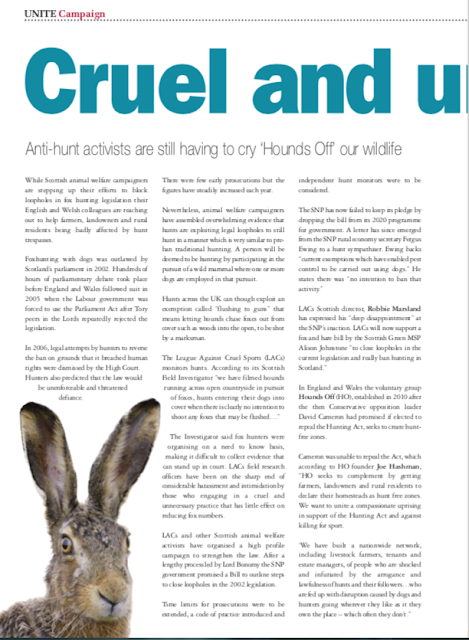 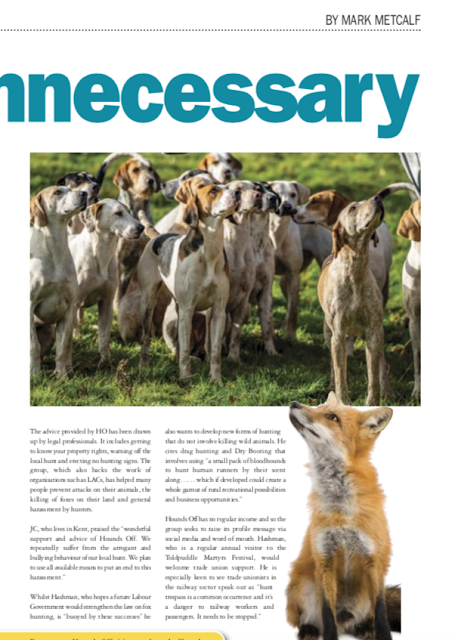