Plans by Rochdale Borough Housing to demolish four of the Seven Sisters high rise flats on the College Bank estate are polarising opinions.

Housing body plans to demolish tower blocks
Tenant group denies misleading residents
Plans by Rochdale Borough Housing to demolish four of the Seven Sisters high rise flats on the College Bank estate are polarising opinions.
Two years ago, Rochdale Borough Housing (RBH), which took control of the local council’s housing stock seven years ago, announced a 20-year regeneration project for College Bank and the nearby Lower Falinge Estate and began to draw up proposals, including demolition.
RBH intends that its proposals will unlock “further major investment, which will regenerate both neighbourhoods with a wider mix of high-quality homes and more green spaces”.
RBH said any displaced tenants would be guaranteed somewhere “like for like” to live, close to the town centre, if they wished.
‘Social cleansing’
RBH intends modernising the remaining three College Bank blocks. It claims its proposals could lead to 500 new homes on the land, some of which is lying empty.
Within weeks of the demolition plans being announced a petition of 544 College Bank residents’ signatures was presented to Rochdale Borough Council. Councillor Neil Emmott, cabinet member for housing, claimed the plans “smacked of social cleansing”.
Rochdale Council and residents opposed to its plans publicly disputed each other’s claims to speak on behalf of those living at College Bank. There were widely different claims about exactly how many residents’ opinions had been gathered by RBH.
Although it was never disputed that most Lower Falinge residents backed demolition, former tenants representatives claimed this was because RBH had run down the estate. According to RBH it has supported 62 tenant households between July 2018 and May 2019 to move from Lower Falinge, with over half staying in the town centre area, “including families who moved from flats into our brand new family houses”.
In May 2019, RBH accused a “small number of individuals on social media of inaccurate and misleading comments” and of personal attacks on its employees. RBH later publicly attacked the College Bank Support Group, claiming a number of residents had been unduly harassed by the group and that it had also “posted incorrect and deliberately misleading information, which appears designed to create unnecessary concerns and paint an inaccurate picture of RBH’s work in central Rochdale”.
Private sector investment
Mark Slater returned in 2014 to live for the third time on College Bank. His one-bedroom flat on the Mardyke block – consisting of 15 storeys with six flats on each level – costs £90 a week rent and is not due to be demolished. It is warm inside and soundproof. Slater enjoys a wonderful view, stretching high up on to the nearby countryside. He can look down on familiar sites in a town he was born in.
Self-employed, Slater helps out at a local soup kitchen. “I know many people who used to need the kitchen and whose lives have been rebuilt thanks to getting accommodation in Seven Sisters flats,” he said. “But they remain vulnerable and they have told me so.”
Slater himself desperately needed accommodation in 2014 as he was sleeping on a sofa at his dad’s house after his marriage collapsed. He has been active for over 18 months in the College Bank Support Group, which disputes RBH’s claims that it will be able to relocate any displaced tenants in like-for-like property.
“When RBH advertise online two bedroom flats it is not unusual to see over 70 bids being made for them,” said Slater. “What will happen when hundreds more are added to the list?”
Slater claimed older people will be dispersed and the subsequent lack of support networks would mean they would become isolated and lonely. He wants all seven blocks refurbished.
RBH estimates this would cost £10 million per block, equivalent to around £110,000 per property. It says it does not have “any prospect of accessing this level of investment for all seven tower blocks”.
Asked by Big Issue North to clarify how much funding it would need for its plans, RBH provided no figures. It is in discussion with government about investment but would not say how much it was looking for.
RBH, which has committed over £25 million of its resources to College Bank and Lower Falinge, has however indicated that its plans will require private sector investment.
According to Slater: “The flats are iconic and it is clear from examples in Salford and Manchester that people want to live in well-maintained tower blocks. Why not here in Rochdale? RBH is ignoring the views of local people on the estate and should revisit their plans.”
The College Bank Support Group is working with a group of architects to draw up alternative plans. RBH has said it will consider them if they are “feasible and sustainable, as well as safe and genuinely affordable for tenants and residents”.
With both sides in the dispute holding divergent views, local MP Tony Lloyd is seeking more information from RBH. He said: “I can’t yet see the big picture as to what we get at the end of
this process. Considerable numbers of constituents have approached me on this matter and proper answers are required to some big questions to reassure everyone concerned.”


RBH, whose top five executives were criticised last week when it emerged they are to receive considerable pay increases over the next three years, said it was “pleased to have an ongoing and constructive dialogue” with the MP. 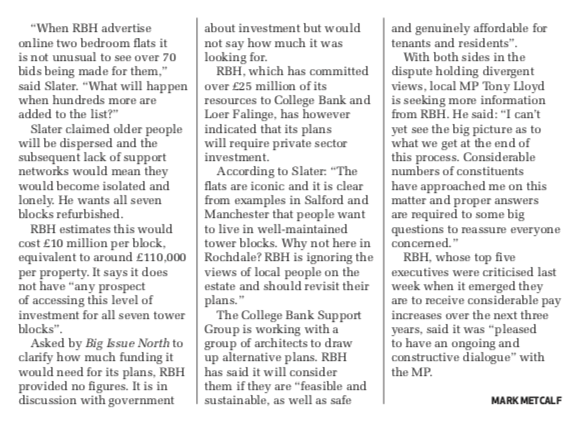