The way I work: Luke Agnew

The way I work: Luke Agnew
Big Issue North 27 Aug - 2 Sept
The grounds maintenance supervisor at a Wirral cemetery on tending graves, helping people find their way around them – and encouraging life in the shadow of death. Interview: Mark Metcalf.

As a landscape gardener who started as an apprentice golf course greenkeeper for Wirral Borough Council in 2002 I was unhappy when I applied for a council supervisor job and they offered me one at a municipal cemetery.
I did not fancy burying people. But I spoke to people working here and realised that Flaybrick Memorial Gardens in Birkenhead has a rich history and is a nice place. So I accepted and over two years later I love where I work and the job, which is extremely varied with lots of interaction with the public.
When it opened in 1864 it was named Birkenhead Cemetery. It had three separate denominational chapels. The Roman Catholic chapel had to be demolished in 1971 and the other two chapels are for non-conformists and the Church of England. There is renovation work taking place to make the two chapels safe for the public to visit.
The cemetery, which was given its current name in 1975, is 30 acres in size and contains the remains of 100,000 people in 10,000 graves.
There are 219 Commonwealth personnel war graves from both world wars. We have a military support group that every weekend tends to these graves and we try to support and interlink our own work with them. We do the same with other volunteer groups. The biggest is the Friends Group.
I supervise two co-workers and we try to make sure that the grass is cut regularly, especially in the summer. We want visitors who come looking for a particular grave to find it and read any headstones. We aim to cut five acres each a week. My working week is 36 hours long. I work Monday to Friday, when I finish at lunchtime.
Local landscape architect Edward Kemp was the curator of Birkenhead Park when he won a competition to design the cemetery. Kemp is buried here and his grave and headstone are one of many that are in a healthy state. They include famous people who are buried here. I am doing my best to find out more about them. There are also some infamous murderers.
But many graves aren’t in great condition. Some have not had visitors for years. We also suffer from antisocial behaviour and one night three young people shoved over 300 headstones. Each grave was sold decades ago in perpetuity and ownership passes to the descendants. That means we cannot legally remount the headstones. What we are allowed to do – using a machine, as many weigh more than a quarter of a ton – is to put them back on the grave face upwards.
We also lie down any headstones that are wobbling and may fall down.
Kemp wrote his first book, How to Lay Out A Small Garden, in 1850 and he designed lots of gardens. You can still buy his books. I am reading one because we are trying to keep as near as possible to his original garden and decorative gothic chapel designs.
At Flaybrick, Kemp employed an army of young labourers to dig and chip out what was an old quarry. It took over a decade. Sand and a small bit of top soil were used to fill in the 15 foot deep holes. As each generation died the graves were opened up and coffins placed on top. Six coffins per grave were allowed.
There are now no new plots for sale but we have about 50 families who own plots and we have 20-25 burials each year.
Until two years ago we used a shovel. It was hard work because a grave may not have been opened for decades. The sand compacts and it becomes like digging through stone. We now use a machine, which makes it easier, but it is unpleasant.
We know how many people are in a grave. Each coffin is around two feet deep. If there are five coffins it means that at around four feet below the surface we can expect things to happen. The first sign we have reached our destination is when you get little water bubbles. Then there is a very distinct, indescribable smell, which you never get used to.
The cemetery was designated as a conservation area in 1990 and five years later an arboretum, a botanical collection of trees, was created. We are following Kemp’s plans in that we are also celebrating life and it is wonderful to be able to listen to the birds singing and see the trees. All animals are welcome and we encourage the growth of flowers. These attract insects, which attract grubs, which attract birds.

We encourage the banks, which are hard to mow, to become wildlife sanctuaries. It appears to be working as the strips we have left undisturbed have become acid grassland, which is quite rare.
The trees are beautiful. Twelve are recorded as significantly important to the British Isles. Trees shed many leaves in the winter. We are continuously clearing them from the paths as we have a lot of elderly visitors. We have to look out for damaged trees. If a branch has broken then John Collins, a grounds maintenance man with specialist tree knowledge, will remove it.
Making sure the cemetery is safe for our many visitors is one of my major tasks. We are often approached to find a specific grave. We have the specialist knowledge to do so and we can also consult the central records office in the borough. People are delighted when they finally get to see the grave of someone they have been searching for over a long time period.
Recently a woman asked about finding the grave of her dead baby. She had lost the child when she was a young woman and the family who she had married into had taken over the burial arrangements. She lost a number of infants who were born with terminal diseases. She had visited the cemetery gates regularly but it had taken her over a decade to summon up the courage to enter.
When me and my colleague Trevor Clark found the grave she hugged and kissed us and tears streamed down her face. It was very emotional. It was very sad but I was happy to have helped.
There are other parts to my job, like buying tools, making sure the machines we use are properly maintained and going to the monthly steering group that gives direction to our work. It now has a representative from Historic England on it.
In a few weeks time a new ranger will start work here. We have lots of ideas so I’m looking forward to working with him. I am enjoying my job. 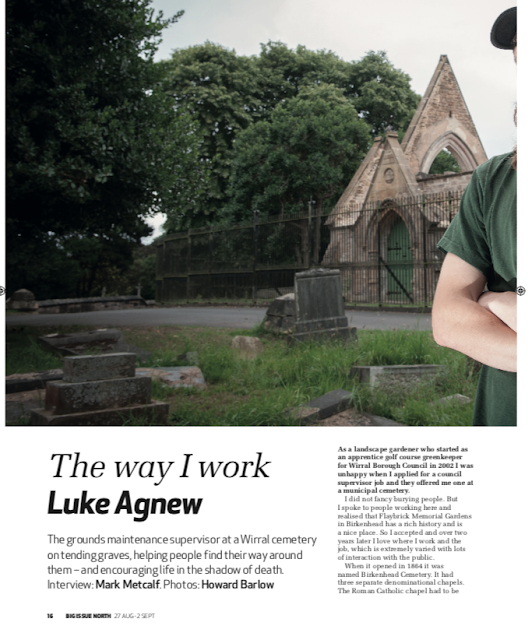 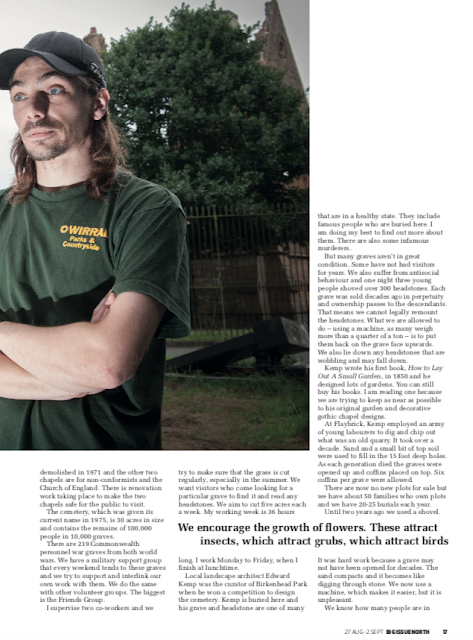 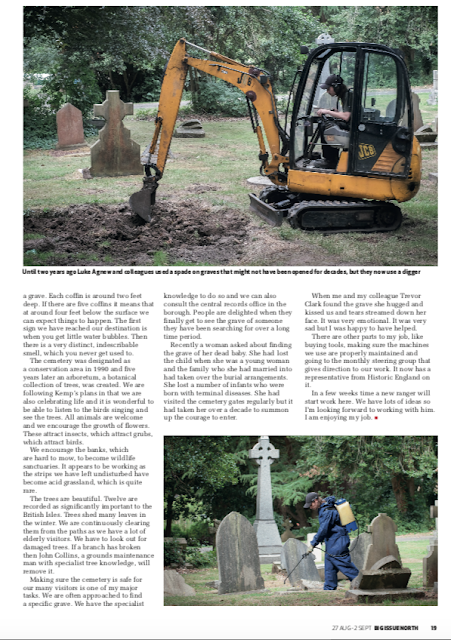