This was due to be published in January in the Landworker magazine but a lack of space resulted in it being 'dropped'. Anyway it was a good day last September and the plaque is to be added to the Rebel Road project at Unite Education pages in next few days. All photographs are copyright of Mark Harvey of ID8 photography.

There were great celebrations at the fifth Wigan Diggers' Festival in September 2015.

Firstly, there was a record attendance of over 3,000 to honour local lad Gerrard Winstanley. Secondly, the organisers aim when they started of achieving a permanent Wigan town centre memorial was rewarded with the unveiling of a plaque renaming the festival location as the 'Gerrard Winstanley Gardens.'

Completing the good news was that Jeremy Corbyn had become Labour leader and the result deals a blow to neoliberalism and should help revive a proud tradition of English radicalism that includes Winstanley, born in Wigan in 1609.

Twelve years later, Wiganers dug up common land in a successful access struggle. An inspired Winstanley later became the main propagandist for the Diggers when they sprang up in the 1640s around the English Civil War, at the conclusion of which a strengthened Parliament refused to introduce radical changes to forever eradicate destitution amongst the poor.

The Diggers believed everyone had the right to till the earth. They argued for land to be seized and owned 'in common' so as to create a classless society where property and wages could be abolished. 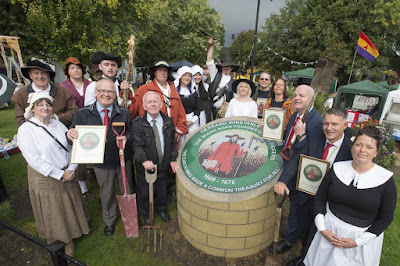 When Winstanley tried to progress these ideas, such as when he took over common land in 1649 at St George's Hill in Surrey, he quickly attracted violent opposition from landowners. Diggers were beaten, their houses burnt down and legal restraints were imposed.

Defeat meant that for centuries Winstanley remained unrecognised as one of England's great radicals. Lenin changed that when following the 1917 Russian revolution he named Winstanley as one of 19 leading revolutionaries. Years later, Tony Benn praised the Diggers for having "established the clear outlines of democratic socialism."

Inspired by hearing Billy Bragg sing The World Turned Upside Down, printer Stephen Hall of Leigh Unite branch, persuaded other local trade unionists to organise the first Diggers Festival in 2011. Key to the growing success of the festival has been the number of Unite members and branches who have backed it.

On Saturday 12 September there was lots to do. The unveiling of the £7,000 plaque was loudly applauded. Funding from their Brighter Borough Fund was provided by the Labour Party ward councillors Terry Halliwell and Lawrence Hunt.

"This is a great day. I never thought that as a young man who often sat around in this area I would return as a proud Labour councillor to help rename the gardens and unveil a plaque commemorating such a unique, radical person as Winstanley, who this festival is making better known each year," said Hunt, a bricklayer.

The renaming was followed by actor Brendan Delaney performing a symbolic digging re-enactment  of events in Surrey in 1649, before the live music, poetry, comedy, educational talks on Winstanley and the Diggers, puppet shows and circus performers started with the crowds also able to browse the large number of food and book stalls and enjoy refreshments that included a well stocked beer tent. 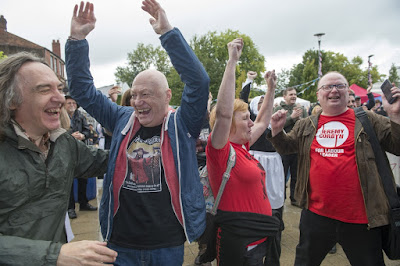 At just before 12 came the announcement that Corbyn had become the new Labour leader and there was a great roar of approval.

The cheers were later resumed when radical film-maker Jimmy McGovern followed in Tony Benn's footsteps when his outstanding achievements were rewarded with the presentation of the Winstanley 'Spade.'

"I am, of course, delighted to see so many people here on a day when Gerrard Winstanley's name will go on all maps. Every year we are trying to add a few more events in honour of this great local visionary whose beliefs of justice, equality, community, fellowship and common ownership I believe are shared by Jeremy Corbyn. Winstanley's fight thus continues today," said Stephen Hall.