Seven thousand Yorkshire school children each year are getting to hear about trade unions for the first time courtesy of a grant from Unite to a community project specialising in health and safety advice.
Keighley Worksafe is a registered charity providing occupational health and safety training and support to voluntary and community groups. It has also, since 1992, won over a million pounds compensation for West Yorkshire workers injured or disabled by work, including mill workers left deaf by workplace noise.

Six years ago the project began working in local schools. As news of its work spread, schools from right across Yorkshire began to invite co-ordinator Dave Towers, a Unite member, to organise sessions for their pupils.
Saint Pius X Catholic High School sits smack bang in the middle of Wath-on-Dearne, near Rotherham. This is a working class community still struggling to come to terms with the pit closures imposed by the Tories in the 80s and 90s. Fifty years old last May the school specialises in humanities.
Lynn Kelly co-ordinates the Personal and Social Education [PSE] programme of teaching and learning that promotes pupil’s personal and social development and their health and well-being. With year 10 [14-15 year olds] students going out on three-week work placements in May each year Lynn has been glad to invite Towers to spend an hour with her classes in the preceding weeks.
“It’s exactly what’s needed. The quality of the talk and the materials employed are very good. 2011 is the fifth year Worksafe have visited and I’d recommend them to any school ” said Lynn Kelly as forty pupils filed in to the school hall to begin watching an introductory video on ‘Eve’s first day’ of work highlighting office hazards.
A relaxed Towers tells the youngsters that when people go to work they should come home roughly in the same condition. That being tired is not surprising but having bits of your body missing or being badly injured is unacceptable. Unite he says “are a trade union who have helped by paying for the leaflets outlining health and safety rights at work that will go in your work experience file. Injuries are higher in non-unionised workplaces.” It’s simple and direct, but seems to be hitting the spot as his audience listens intently.
A second lively video quickly follows, and the case of 23 year-old Steven Allen from Keighley, killed on a building site in 2007, is used to illustrate what can happen when procedures at work are unsafe.

“I am glad we have had the session as it has made me aware that there are dangers at work” said Tom Blessed and “as a result I would feel a bit more confident about speaking up if I felt something was unsafe or dangerous,” said Josh Walker. Kathryn Mundy had not previously heard about trade unions but now grasped “they protect you at work.”
“We introduce trade unions subtly and it is very likely that it will be the only time during their school lives that the youngsters get to meet someone who can clearly be identified as a trade unionist.
The £7,000 we receive from the Unite Yorkshire and Humberside regional committee is a vital resource as apart from funding from Airedale NHS to deliver this accidental injury prevention work in local schools to pay my wages we have very few funds,” said Dave Towers. 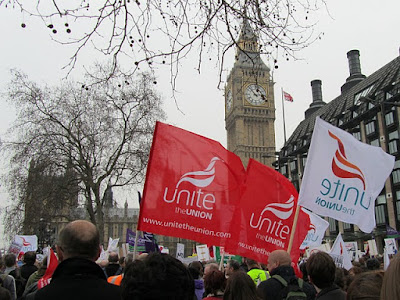 Needed
Unite representatives interested in being trained to run sessions in schools in the Halifax area. Telephone Dave on 07891 878261 or email – uniteinschools@hotmail.co.uk
Posted by Mark at 10:37