A time for youth at Durham Miners' Gala

A time for youth

It was great to see an article about the Durham Miners’ Gala in the last issue of ColdType.
Despite the growing numbers for whom this annual event cannot be missed, it constantly fails to attract the attention of the mainstream media and the BBC and, as a result, is little known about overseas. It would be brilliant if more overseas visitors, especially trade union delegations, attended.

In recent years the gala has expanded with a whole series of events that start in the days leading up to the Saturday march and rally.

This year, UNITE the union commissioned the Red Ladder Theatre Company to present a musical play about the 1984/85 miners’ strike. “We’re Not Going Back” – was well received when it made its debut in the main council chamber of the truly magnificent Durham Miners’ Association (DMA) headquarters at Redhills, where the DMA and UNITE last year established a welfare and employment rights advice support centre, which has also been the base for significant campaigning initiatives against government welfare cuts.

The number of new miners’ lodge and community banners that are made across County Durham communities throughout the year also demonstrates that the meeting itself is not just one day in the calendar.

For someone like myself who first attended the Big Meeting in the 1960s and has returned on close to forty occasions it is truly uplifting that, despite having no working miners for over two decades, the gala not only exists but also is getting bigger. There are moments when taking in the whole scene throughout Durham City and on the Racecourse by the River Wear almost brings me to tears so deep are the emotions and the connections with my forefathers and their wives, not forgetting my mates who worked down the pits and all those who fought so heroically in 1972, 1974 and 1984 to defend their terms and conditions, and ultimately, the communities I was brought up in.

It is not only the fact that there are no working miners that makes the continued existence of the gala something of a miracle. Despite being left without any memberIship contributions, the gala organisers, the Durham Miners’ Association (DMA) has continued to represent at industrial tribunals those former miners made unwell by harsh working conditions.

But with the DMA having lost a lengthy, highly expensive court case in defence of former miners suffering from osteoarthritis on grounds that the three-year time limit for claims had been exceeded, the bill of £2.2 million naturally placed doubts about the future of the gala, which costs in excess of £60,000 a year. Friends of the Durham

Miners’ Gala was launched last year and asks people to make a minimum donation of £2 a month or £24 a year. Over a thousand people, including myself and some friends I have persuaded, have so far signed up. Meantime, major unions – UNITE particularly – have contributed generously to the costs. All this demonstrates that there is a determination to ensure the future of this important trade union and labour movement event.

However, I feel there are a number of things that need changing and adopting that would make the gala even more important. The first is its appearance and by which I mean at times it no longer appears to be a miners’ gala. This is because most of the miners’ lodge banners and their accompanying banners are first on the cobbled Durham City streets and they go through in a block.

Then the various individual trade union blocks from such as UNISON, NUT, PCS and the RMT go through separately. I feel it would be much better if these blocks were broken down with the miners’ lodge banners intertwined with those of other trade unions. By doing this then anyone turning up would never be able to lose sight of the fact that first and foremost this event is historically connected with the miners’ of Durham and Northumberland, something that must never be allowed to be forgotten.

That said there is a clear need for another just as important message to come though on the day and that must be JOIN A TRADE UNION AND GET ORGANISED.

In particular, there are tens of thousands of young people of working age who attend the gala. Speaking to some of them quickly illustrates they know virtually nothing about trade unions. In my day you left school, started work and joined the union but that is not so today although the North East of England remains an area where over 35% of those in work are in a union, a figure significantly above the UK average. “It is something my dad was in.” “There isn’t one where I work.” “No one has mentioned joining to me.” “I’d get sacked if I joined one.” All these and more were said to me when I spoke to some youngsters at this year’s gala.

With trade union density among young workers aged between 16 and 24 down at 8 per cent then it is clear that much work needs to be done, especially when it is known that they are working in workplaces and sectors where there is no union to join. Whilst there are often many references from the speaker’s platform as to how terrible things are for young people there is little attempt to engage with those that are there. Certainly the range of speakers themselves is often much, much older and none is a young trade union member who may have unionised and organised a particular workplace at some time in the recent past.

There is nothing so inspiring as learning from success. Just days before this year’s gala, the workers at Tyneside Safety Glass in nearby Gateshead had largely won their pay strike and it would have been great to let the crowd know of this important success achieved after three weeks on strike. 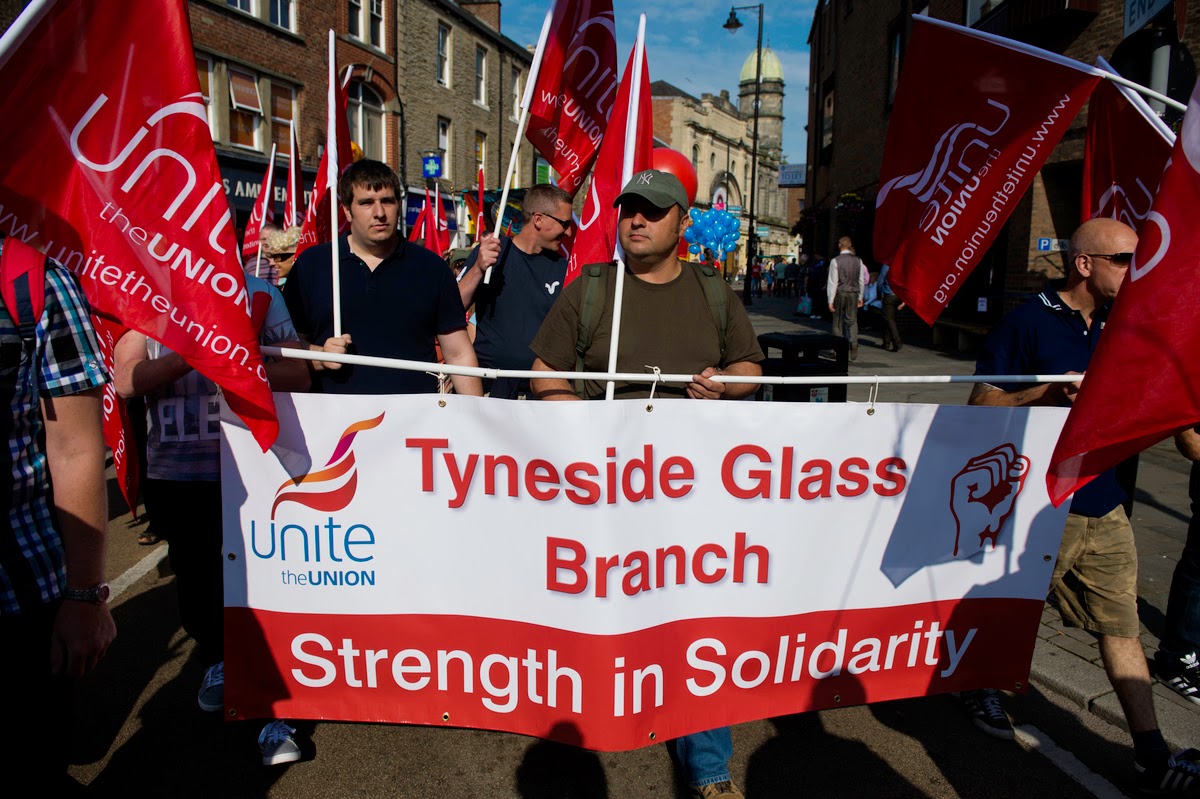 Where were the big banners with the slogans JOIN A UNION. Where were the leaflets – again with examples of success and accompanied by information about what a union is and how to join - and where was the drive to speak to young people on the day and encourage them to sign up?

I have already mentioned the need to try to engage with the young people by having a speaker more closely related to their age group. But, in addition, do we really need 4-5 people to more or less say the same thing and represent the same Labour Party constituency. The Labour movement has lost two of its best speakers in Bob Crow and Tony Benn and aside from UNITE’s Len Mc- Cluskey and Mark Serwotka from the PCS, I am not convinced that the current trade union leaders command much of a presence, they certainly didn’t this year as what they had to say was not especially riveting.

There is within the brochure for the gala, and occasionally from the platform, references to new movements and campaigns including UK Uncut and the People’s Assembly. Only weeks after the gala, a march was started from Jarrow to London to put pressure on the government to change the disastrous course it has plotted to privatise the National Health Service. This movement was kick-started by local Darlington mums and I wouldn’t have minded hearing from them. Interestingly, the largest cheer this year came when the Communications Workers Union speaker Jane Lofts said: “Workers should unite with every refugee and asylum speaker.”

A good friend is someone who is unafraid to offer constructive criticism. I am a good friend of the Durham Miners’ Gala and while I certainly hope to see the gala running for many years to come I think it needs some changes. I am sure other people just as passionate as me feel the same.

Dedicated to Joseph Charlton, aged 42, and Robert Noble, aged 45, relatives of mine who perished at the Easington Colliery disaster in 1951.
Posted by Mark at 06:12